XPeng's CEO believes that China's EV industry started early and it will take at least 10 more years of hard work to truly lead the world.

The comments were seen as an endorsement of China's fast-growing industry, though for the man at the helm of XPeng Motors (NYSE: XPEV, HKG: 9868), one of Tesla's top rivals in China, he doesn't exactly agree.

"Few seem to realize that China is leading the world in renewable energy generation and electric vehicles. Whatever you may think of China, this is simply a fact," Musk tweeted earlier today.

Musk's comments were then posted by Tesla's team in Beijing on his Weibo account and received a lot of retweets and discussion.

In a retweet of a local media report on Musk's comment on Weibo, XPeng Chairman and CEO He Xiaopeng said that China is just starting earlier in the EV space and that the industry still needs to put in more effort to become stronger.

Here's what Mr. He posted on Weibo, as translated by CnEVPost:

I don't know about renewable energy generation, but China is just at the forefront of the world in the electric vehicle sector.

To lead the world, it is important to lead in the global market and win in business, in addition to leading in technology and products.

To achieve these, at least 10 years of effort is needed. 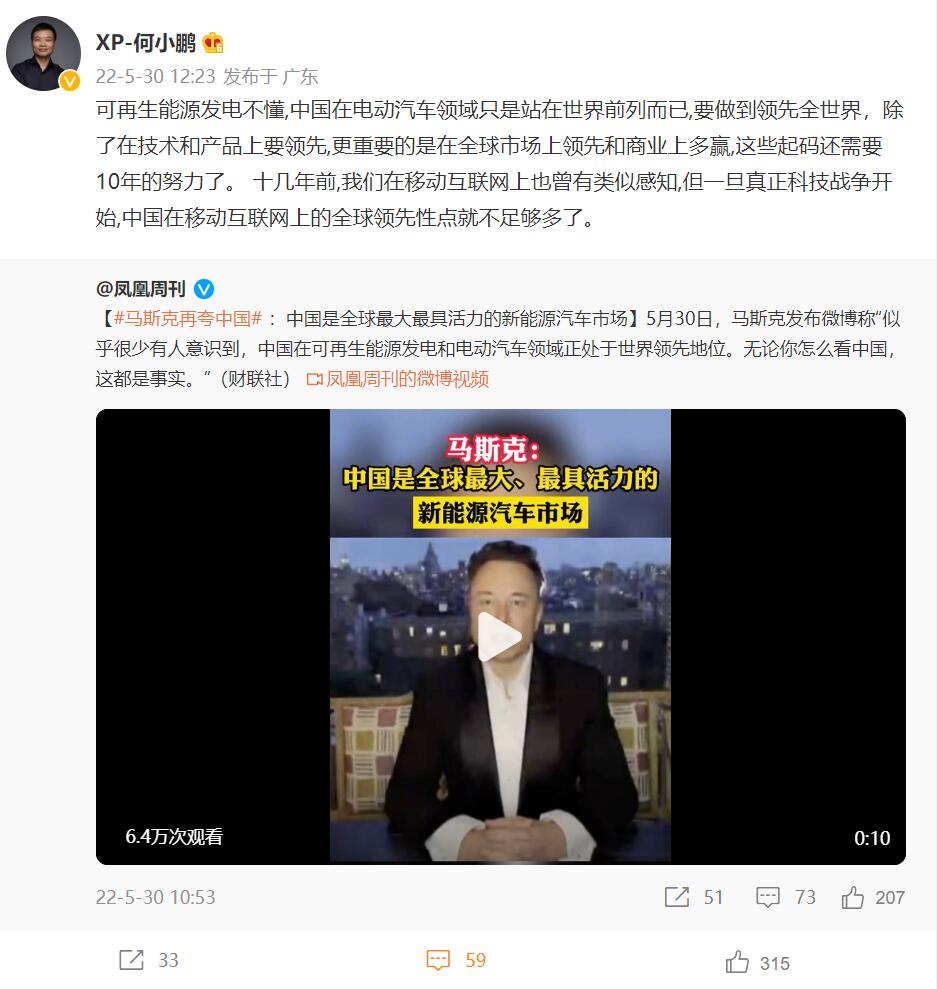 Mr. He's use of mobile Internet as an example is telling, as he co-founded UCWeb, a mobile browser that was a huge success, in 2004 when the industry was in its infancy.

Alibaba acquired its entire stake in 2014 after significantly increasing its stake in UCWeb in late 2013. While UCWeb still has hundreds of millions of users, it has long since fallen significantly behind Google Chrome.

Mr. He's comments today are interesting, considering the previous feud that existed between him and Musk.

After XPeng announced its next-generation self-driving architecture that would use LiDAR in late November 2020, Musk responded to Twitter users by suggesting that the company had stolen Tesla's software.

Mr. He then denounced this as a deliberate smear and said that starting in 2021, Tesla should be prepared to be beaten by XPeng in the autonomous driving space in China "and not be able to find out where the East is".