NIO's head of autonomous driving engineering rumored to be leaving

NIO may be facing a talent loss, but its autonomous driving team is expected to be led solely by Ren Shaoqing, allowing for more streamlined management.

Zhang will be leaving NIO (NYSE: NIO, HKG: 9866) in the near future, and it is expected that there will be a wave of adjustments to the company's autonomous driving team structure, Weibo blogger @缺个司机 said today.

Notably, he was rumored to be leaving last year and was later reportedly retained, the blogger added.

We don't usually report on rumors posted by unknown bloggers, but after the information was posted, @肉肉爸比ev, a well-known car blogger and frequent and accurate source of information about NIO, retweeted the rumor, saying it was basically true and expected to be officially announced in the near future.

At the end of November 2020, local tech media LatePost reported that NIO had begun research and development on L4 autonomous driving technology, with executive Ren Shaoqing in charge.

Ren, previously director of R&D at Chinese self-driving startup Momenta, joined NIO as AVP in August 2020. He was responsible for the driverless algorithm team, reporting directly to William Li, the company's founder, chairman and CEO, according to the report.

At about the same time, NIO promoted the young executive, Zhang, director of autonomous driving, to AVP, reporting directly to Li, according to LatePost. 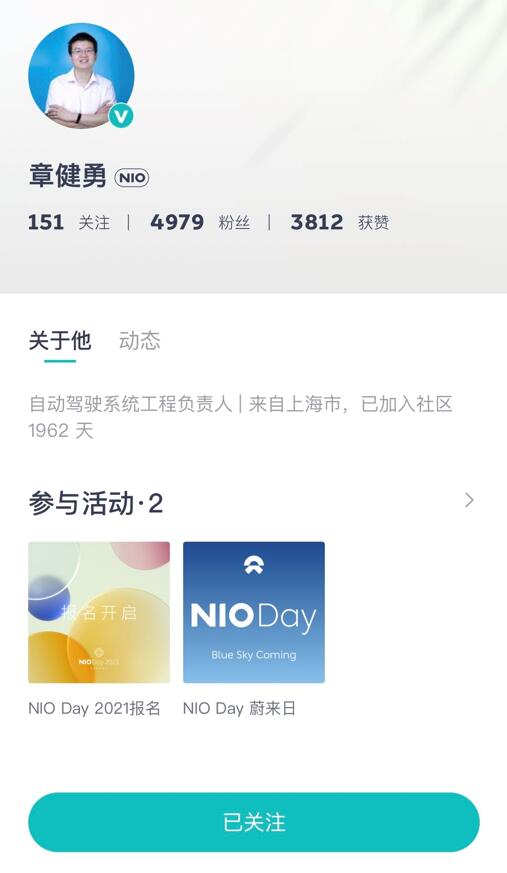 (Zhang's page in the NIO app)

Zhang was an early employee of NIO, having been in charge of the pre-development of autonomous driving at SAIC from 2013-2014. He previously reported to Jamie Carlson, the former NIO autonomous driving VP based in North America, who left in June 2020, the report said.

In late October 2021, there were rumors that Beijing-based Ren's team had quickly expanded to more than 300 people, and that the squeeze on the scope of business for Zhang's team in Shanghai had led to some departures.

For NIO, if the information that Zhang will be leaving proves true, it will mean a loss of talent but also perhaps a more streamlined structure for its autonomous driving team. If Zhang leaves, then Ren will be Li's right person to lead NIO's autonomous driving R&D.

The current focus of NIO's R&D in the field of autonomous driving is NAD (NIO Autonomous Driving), which will adopt the ADaaS (AD as a Service) subscription model and is expected to gradually start allowing subscriptions by region in the fourth quarter of this year.

It's also worth noting that blogger @理想嘉-大D, who has 146,000 followers on Weibo, said on March 29 that Harry Wong, former director of autonomous driving products at XPeng Motors (NYSE: XPEV, HKG: 9868), has joined NIO.

However, according to a subsequent report by tech media outlet 36kr, Wong seemed to respond in his WeChat status that this was "phony".

Wong had already joined NIO last year, but in the position of senior director, not vice president, according to 36kr.