The number has surpassed its US counterparts, with Alphabet's Waymo's Robotaxi fleet of about 800 vehicles. 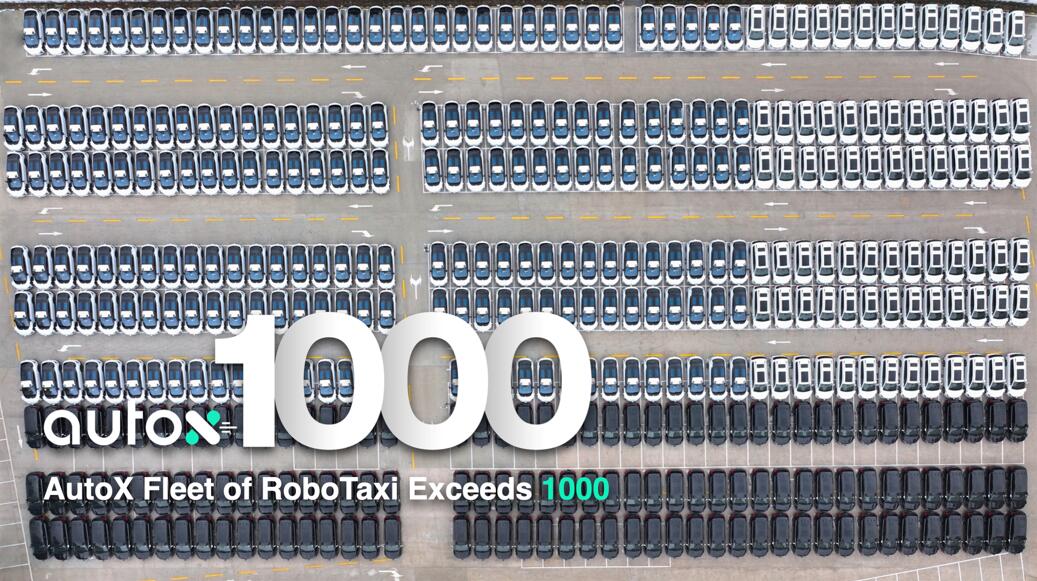 Reaching the 1,000 autonomous vehicles milestone is a groundbreaking moment for AutoX and the Robotaxi industry as the largest fleets were previously only in the hundreds, the company said, adding scaling beyond 1,000 Robotaxis represents a significant leap forward for larger-scale commercialization.

The number already surpasses its US counterparts, with previously public data showing that Alphabet's Waymo's Robotaxi fleet has about 800 vehicles.

This is a monumental milestone for the company and the autonomous vehicles industry as AutoX’s Robotaxi fleet is the largest in China, the company said.

The dedicated Robotaxi production line may be a key factor in supporting the rapid growth of AutoX's fleet.

The production facility is capable of assembling Robotaxis to an extremely high level of precision and consistency using advanced technology, robotics and systems. These vehicles can begin operating autonomously as soon as they leave the doors of the facility, according to the company.

It is the first L4/L5 driverless computing platform in China, reaching 2,200 TOPS of computing power, according to data previously announced by the company.

The AutoX factory was built precisely for the production of the Gen5 Robotaxi, and the vehicle features vehicle-grade redundant wire controls deeply integrated by Chrysler FCA, and is currently the only vehicle in China that can support mass production of truly driverless vehicles, according to the company.

"Relying on China's first fully closed-loop Robotaxi production line, AutoX is able to guarantee the quality and consistency of each unmanned vehicle produced, which is a prerequisite for the landing of a truly fully unmanned Robotaxi," the company's founder and CEO, Xiao Jianxiong, previously said.

In addition to reaching the 1,000-vehicle milestone for its Robotaxi fleet and opening a new Robotaxi operations center in San Francisco, one of the most densely populated urban centers in the United States.

"We want to deploy the AutoX Robotaxi fleet in many cities to serve hundreds of millions of people, as well to improve and become a part of communities around the world. Cities such as San Francisco, Shenzhen, Shanghai, and Beijing are the launchpads for Robotaxis to transform people’s daily lives. And that’s just the beginning," Xiao said today.