This is the second consecutive month in which the BYD Dolphin model has sold more than 10,000 units in the six months since its launch, with cumulative sales of 40,200 units. 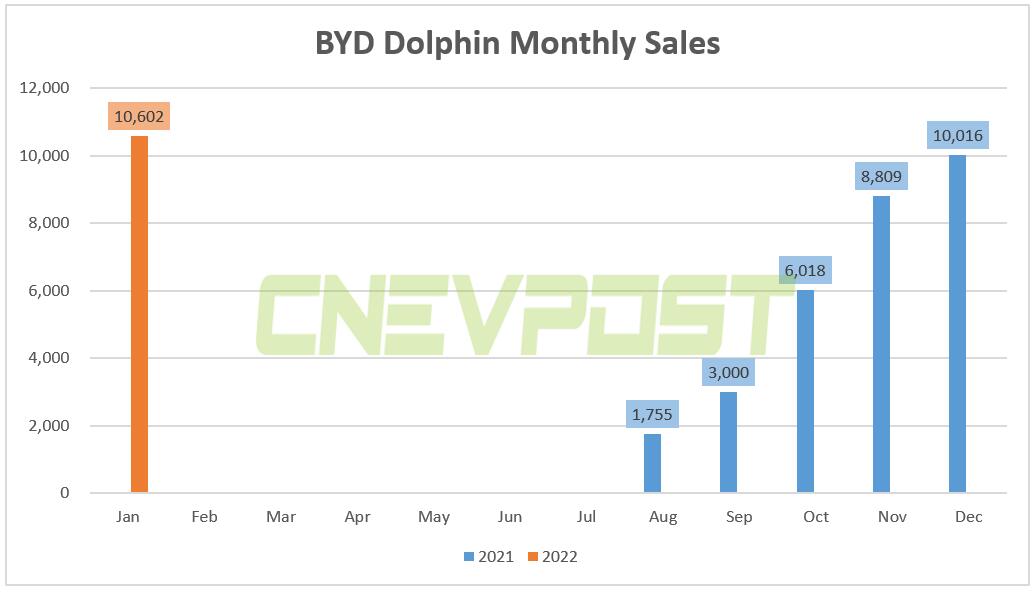 BYD's economical Dolphin model, the first on its e-platform 3.0, has become one of the company's most popular models after just a few months on the market.

Figures released today by BYD showed that the all-electric compact car, which looks a bit like the Honda Fit, sold 10,602 units in January, up 9.8 percent from 10,016 units in December.

It was the second consecutive month in which the model sold more than 10,000 units in the six months since its launch, with cumulative sales of 40,200 units.

On January 21, BYD said it will adjust the official guide price of its new energy models in the Dynasty and Ocean series by RMB 1,000 - 7,000 yuan.

This is due to a significant increase in raw material prices and the withdrawal of subsidies for new energy vehicle (NEV) purchases, the company said. The price adjustment has been effective since February 1.

The model is available in four versions with a range of 301km-405km.

BYD figures released earlier today showed it sold 93,168 NEVs in January, up 361.7 percent year-on-year and essentially unchanged from the 93,945 units sold in December.

That includes 92,926 passenger cars, and 242 commercial vehicles, the company said in an announcement filed with the Hong Kong Stock Exchange today.

The company is now close to completing its transition to a company focusing only on NEVs, as it sold 2,254 fuel vehicles in January, down 90 percent from 22,223 in the same month last year.