The Volkswagen ID. family of electric vehicles had a total of 70,625 deliveries in China in 2021.

Volkswagen's ID. family of electric vehicles (EVs) has sold more than 10,000 units in China in each of the past four months, and now the German automaker has announced sales targets for the lineup in China in 2022.

The ID. family aims to sell 140,000 units in China in 2022, Volkswagen China's CEO Stephan Wöllenstein said today, according to The Beijing News.

On January 1, Volkswagen released data showing that 13,787 ID. family EVs were delivered in China in December, down 2.7 percent from 14,167 units in November.

This is the fourth consecutive month that the ID. family of EVs has delivered more than 10,000 units in China, bringing total deliveries of the series in the country to 70,625 units in 2021. 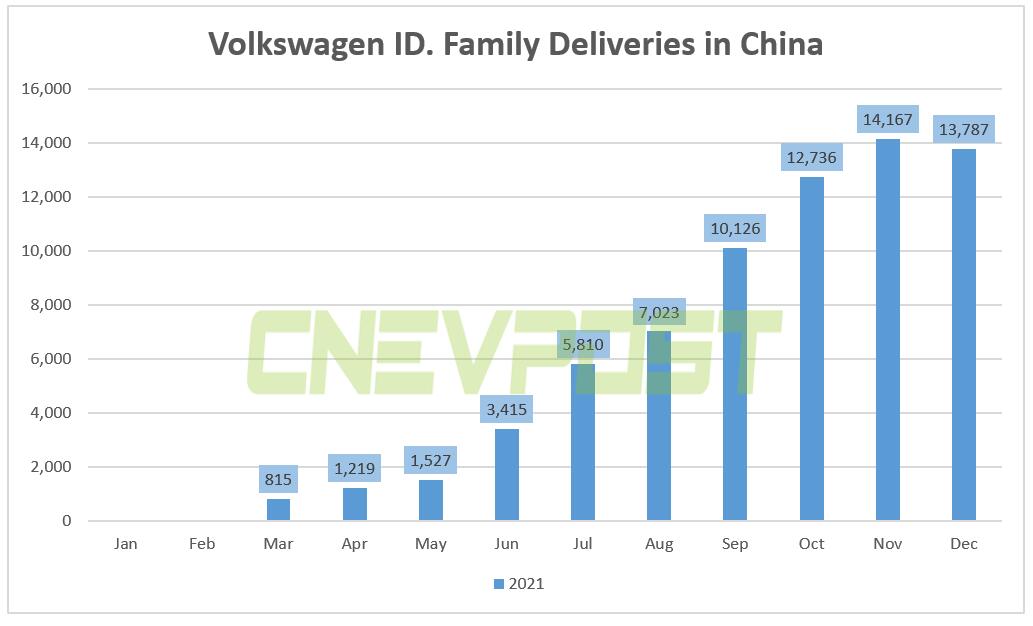 That's good growth, but it seems relatively conservative for Volkswagen, considering the multiple models offered in China for the ID. lineup and the four consecutive months of deliveries above 10,000 units.

Still, that leaves room for Volkswagen to exceed its target on deliveries.

For the full year 2021, Volkswagen's deliveries in China were 3.3 million units, down 14 percent from a year earlier, affected by a chip shortage, Wöllenstein said.

Volkswagen has raised its production targets for this year and next to 10 million units in 2022 and about 11 million in 2023, according to The Beijing News.

Volkswagen is currently working with Gotion High-Tech on research and development of standard cells and solid-state batteries, but the latter is not Volkswagen's only battery supplier in China, Wöllenstein said, adding that Volkswagen also has cooperation with CATL and Wanxiang A123.

At the end of October last year, tech media outlet 36kr reported that Huawei was planning to form a joint venture with Volkswagen to develop self-driving technology.

Wöllenstein said today that Volkswagen and Huawei are indeed in discussions, but there is no news that can be confirmed at this stage.