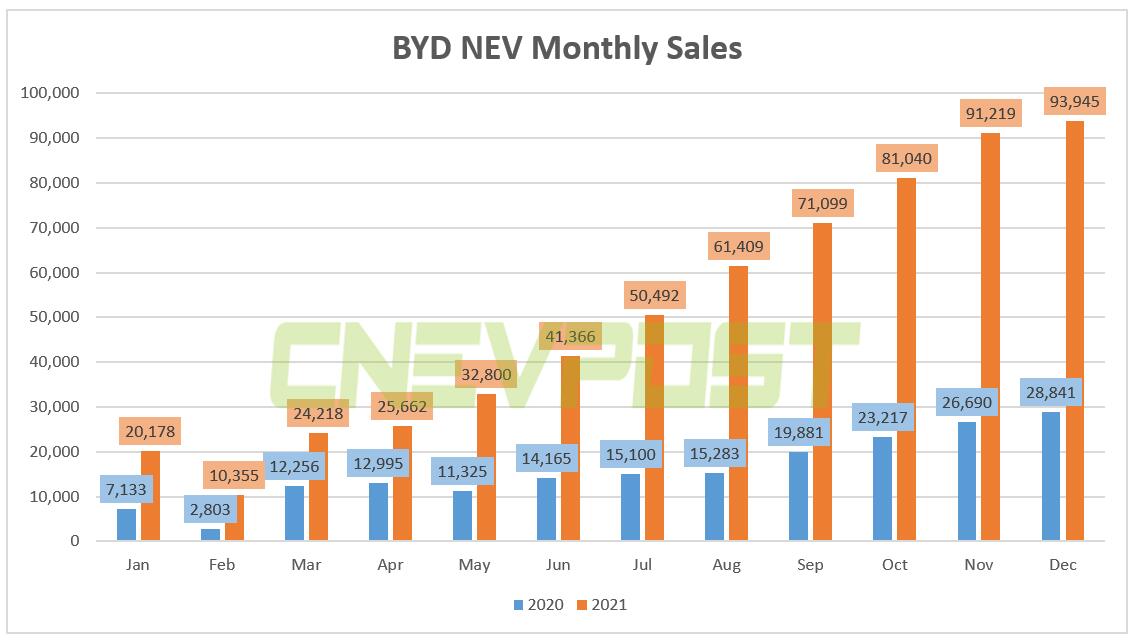 BYD sold a record number of new energy vehicles (NEVs) in December, despite the Covid-19 outbreak in Xi'an, northwest China, which forced a temporary shutdown of one of its production sites.

BYD sold a record 93,945 NEVs in December, up 225.7 percent year-on-year and up 3 percent from 91,219 units in November, according to an announcement the company filed with the Hong Kong Stock Exchange today.

BYD continued to reduce its fuel vehicle business in 2021, with sales of such models significantly lower each month than in 2020.

The company's total installed base of power and energy storage batteries in December was about 5.049 GWh, and about 37.921 GWh in 2021.

BYD, which previously saw a huge backlog of orders due to lack of capacity, is expected to see its deliveries delayed even further as the latest Covid-19 outbreak hits the city of Xi'an.

BYD's plant in Xi'an has been shut down and the city has been forced into lockdown due to the new Covid-19 outbreak hitting the city, according to a report by iautodaily.com on December 23.

The Xi'an city government previously announced that the city went into a city closure starting at 00:00 on December 23, 2021, and everyone was banned from going outside in principle except for core personnel who keep the city running.

The Xi'an plant is one of BYD's most important bases, where some versions of the hot-selling sedan Qin, as well as all models of the compact SUV Song series, are produced, according to the report.

The report cited an update from BYD sources in a WeChat status that said the original production schedule and the date consumers are expected to get deliveries will be delayed because of the lockdown.

Separately, cls.cn quoted BYD sources as saying that the outbreak has had some impact on production at the company's Xi'an campus and that it was actively responding.

BYD, which has operations in Xi'an including passenger cars, commercial vehicles, electronics, rail transportation and power batteries, produced 55,000 vehicles at its Xi'an plant in November, according to the report.

"BYD has eight production bases in China, and the Xi'an base will be affected to some extent by that outbreak in terms of production for the month. But for the whole year, the impact will not be too big," the report quoted an industry source close to BYD as saying.