He expects China's NEV sales to increase significantly by the end of 2022 before subsidies are removed in 2023.

As China clarifies that the country will not provide subsidies for new energy vehicle (NEV) purchases in 2023, an expert believes more consumers will seize the last chance to take advantage of the subsidies next year, pushing sales of such vehicles up sharply.

Cui Dongshu, secretary-general of the China Passenger Car Association (CPCA), said in an article today that sales of NEVs in China are expected to top 6 million units next year, corresponding to a penetration rate of about 22 percent.

He said he previously expected China to sell 4.8 million new energy passenger cars in 2022, which now needs to be adjusted to 5.5 million units, corresponding to a penetration rate of about 25 percent.

NEVs include new energy passenger cars and new energy commercial vehicles, with the former accounting for a major portion of sales.

According to China's latest policy release, the size of vehicles covered by the subsidies in 2022 has changed from the original expectation of 2 million vehicles to one that will cover all vehicles sold throughout the year, Cui noted.

As a result, year-end sales in 2022 are expected to rise sharply and drive up full-year NEV sales, he said.

An announcement today from four ministries, including China's Ministry of Finance, said that subsidies for NEV purchases in 2022 will be slashed by 30 percent from 2021.

This in fact does not come as a surprise. China's Ministry of Finance released a plan on April 23, 2020, that the country's subsidies for NEVs would be scaled back each year, saying that in principle the amount of subsidies would be reduced by 10 percent, 20 percent and 30 percent each year from 2020-2022, respectively, from the previous year.

The 2020 policy also mentioned that in principle, the annual subsidy size will be capped at 2 million units. However, the latest regulations released today do not mention that number, implying that the quantity limit has been dropped.

Notably, in a separate announcement, the Ministry of Finance clarified that the subsidy policy will not be continued starting in 2023.

China's purchase subsidies for NEVs in 2022 will be slashed by 30 percent from the 2021 subsidies, and many consumers are considering locking in the deals early, which has driven recent sales in the NEV market, CCTV reported on Thursday.

At a store in Sanlitun in Beijing's Chaoyang district, there was only one show car in the large showroom, the CCTV report said, adding that three of the store's original four show cars were sold at the beginning of the month and have not yet been restocked.

Wholesale sales of new energy passenger vehicles in China reached 429,000 units in November, up 131.7 percent year-on-year and up 17.9 percent from October, according to data released today by the CPCA. 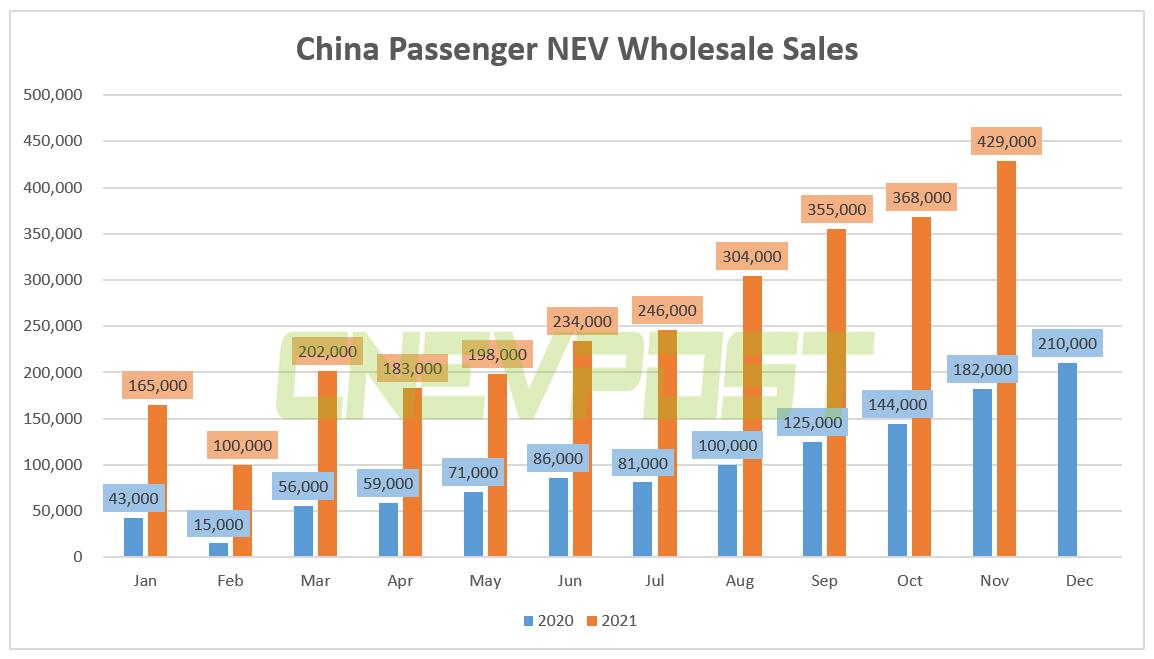