The amount of retired power batteries in China is going up year by year, with the scrap volume expected to exceed 18 GWh in 2021 and reach 91 GWh by 2025, according to TrendForce.

With the rapid development of China's new energy vehicle (NEV) industry, the size of retired power batteries is also increasing year by year.

China's used battery recycling market has gained some scale and is estimated to reach RMB 26 billion ($4.1 billion) by 2025, more than 10 times the RMB 2.4 billion in 2020, according to a report released today by market research firm TrendForce. 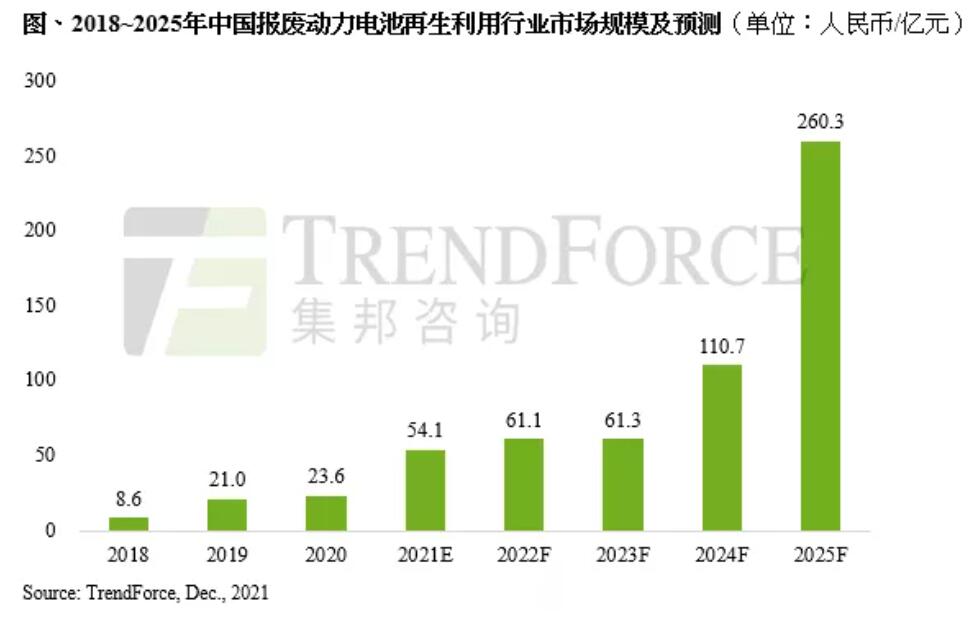 Power battery retirements in China are going up year by year, with end-of-life volumes expected to exceed 18 GWh in 2021 and reach 91 GWh by 2025, the report said.

The recycling is mainly to recover lithium, cobalt, nickel and other metals from retired power batteries after disassembly.

TrendForce believes that with the rapid development of the NEV industry, large-scale retirement of power batteries can be expected, thus bringing opportunities for power battery recycling and secondary utilization.

At the end of June, China's state-owned broadcaster CCTV highlighted the impending mass retirement of power batteries in a report.

As the power batteries of the earliest batch of NEVs to hit the market came into retirement, the total number of retired power batteries in China reached about 200,000 tons in 2020, according to CCTV.

Power batteries have their own upper limit of service life, and when the capacity decays to 80 percent, they are no longer suitable for car driving use.

The general theoretical life of NEV power batteries can reach 8 years, corresponding to a mileage of 100,000 km, but in actual use, they usually only have a life of 4-6 years.

China ushered in the NEV boom after 2013 and became the number one country in NEV production and sales for six consecutive years starting from 2015 to 2020. According to the upper limit of service life, China has already seen the first wave of power battery decommissioning in 2018.

China's new battery recycling policy, TrendForce said in a report today, will promote the orderly and healthy development of the lithium battery industry and help break through global constraints on key resources such as lithium.

This is not CATL's first foray into battery recycling.

In 2013, the company entered the battery recycling business through Brunp Recycling, and in 2018, SAIC and CATL entered into a strategic partnership to jointly promote the recycling of NEV power batteries.

As an important subsidiary of CATL, Hunan Brunp is currently the largest recycling base for used batteries in China, with a total of over 6,000 tons of used batteries recycled and processed annually.

China sees 9,435 power battery recycling-related company registrations in H1, 26 times as many as a year ago