Chinese securities regulator says it recently had constructive communication with US SEC, PCAOB

The CSRC has made positive progress with regulators, including the US SEC and PCAOB, in advancing cooperation on a number of key matters, according to a statement.

A number of recent reports and US policy moves have triggered sharp declines in the stocks of Chinese companies listed in the United States. The China Securities Regulatory Commission (CSRC) gave its position today in a question-and-answer session.

The CSRC and relevant regulators have always been open to companies choosing where to list abroad and fully respect the companies' independent choice of listing venue in accordance with the law and compliance, the statement said.

"Recently, individual media reports that Chinese regulators will prohibit companies with variable interest entity (VIE) structures from listing abroad and promote the delisting of Chinese companies listed in the US are completely misunderstood and misinterpreted," the statement said.

"We leaned that some domestic companies are actively communicating with domestic and foreign regulatory agencies to promote listing in the United States," according to the statement.

In terms of US-China audit and regulatory cooperation, the CSRC has recently had frank and constructive communication with the SEC, the Public Company Accounting Oversight Board (PCAOB) and other regulators on resolving issues in cooperation, and has made positive progress in advancing cooperation on some key matters, the statement said.

"We believe that as long as regulators on both sides continue to uphold this principle of mutual respect, rationality, pragmatism and professional mutual trust in conducting dialogue and consultation, we will be able to find a mutually acceptable path of cooperation," according to the statement.

In fact, China and the US have been cooperating in the field of audit and supervision of China concept stocks, and had also explored effective ways of cooperation through pilot inspections, laying a better foundation for cooperation between the two sides.

However, some US political forces have politicized capital market regulation in recent years, suppressing Chinese companies listed in the US for no apparent reason and coercing Chinese companies to delist, which is not only contrary to the basic principles of market economy and the concept of the rule of law, but also damages the interests of global investors and the international status of the US capital market, the statement said.

"This is a 'multi-loss' approach that will benefit no one," the statement said.

In today's highly globalized capital markets, there is a greater need for regulators to deal with audit and regulatory cooperation in a pragmatic, rational and professional manner, and forcing the delisting of Chinese companies listed in the United States should not be a responsible policy option, the CSRC said.

For some time now, Chinese regulators have introduced a series of policy measures to promote the regulated development of the platform economy, the main purpose of which is to regulate monopolistic practices, protect the rights and interests of SMEs and data security and personal information security, and eliminate the vacuum of financial regulation and prevent disorderly expansion of capital, the statement said.

In response to these new issues, regulators in various countries are also trying to adopt different regulatory measures to promote a healthier and more sustainable development of the platform economy. "Therefore, the policies introduced by the Chinese government are not a suppression of specific industries or private enterprises, and are not necessarily related to the overseas listing activities."

In implementing the relevant regulatory measures, Chinese regulators will steadfastly promote reform and openness and further improve the transparency and predictability of policy measures, the statement said.

The CSRC will also continue to maintain open communication with its US regulatory counterparts in an effort to resolve the remaining issues in audit and regulatory cooperation as soon as possible, the statement said. 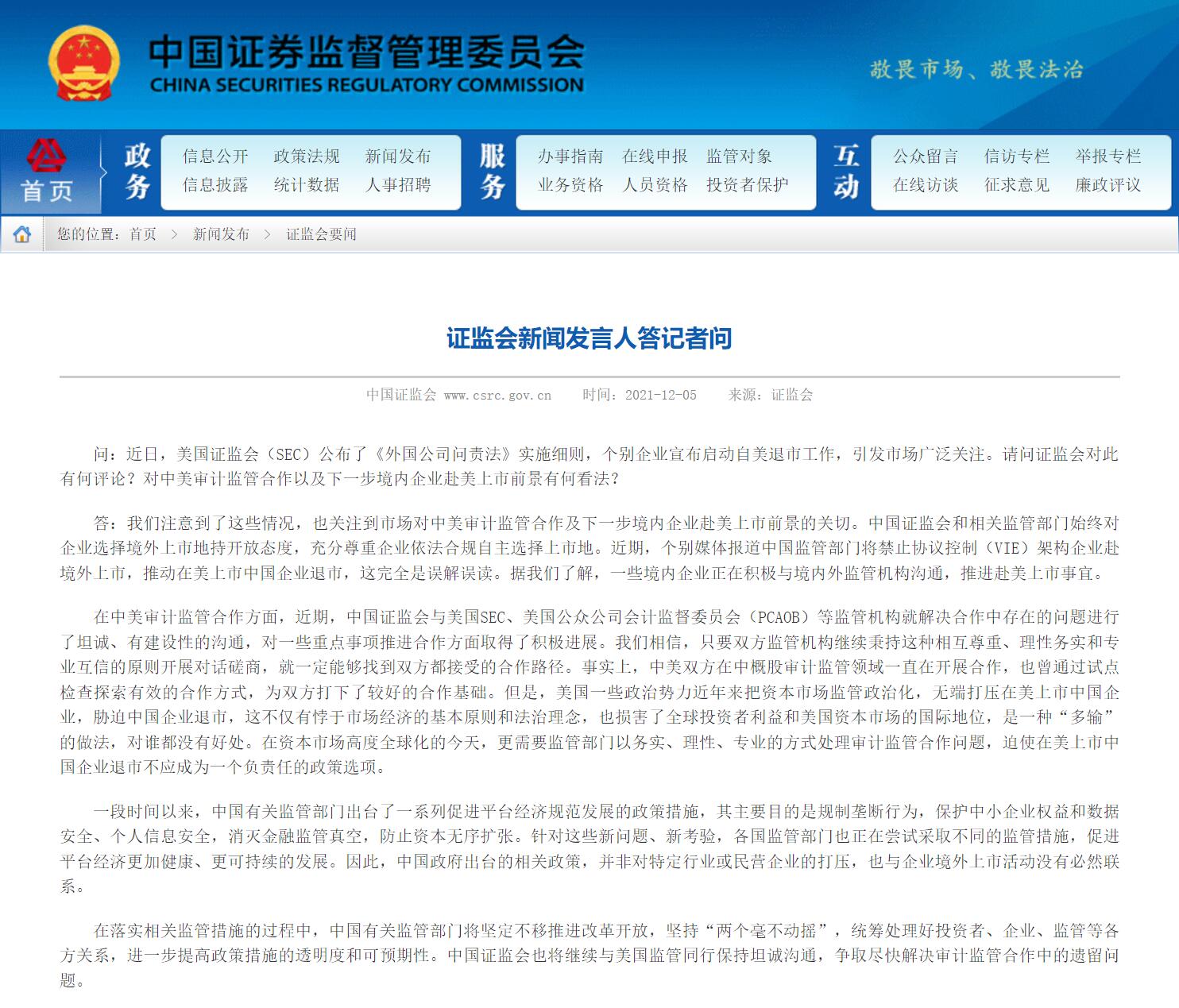