Alibaba increased its long position in XPeng Motors’ Hong Kong shares from 0% to 14.97% on July 7, according to a HKEx filing.

XPeng went public in Hong Kong on July 7 at an offering price of HK$165, after which its share price continued to fall. But in the past four trading days, the stock has accumulated a gain of about 13 percent. 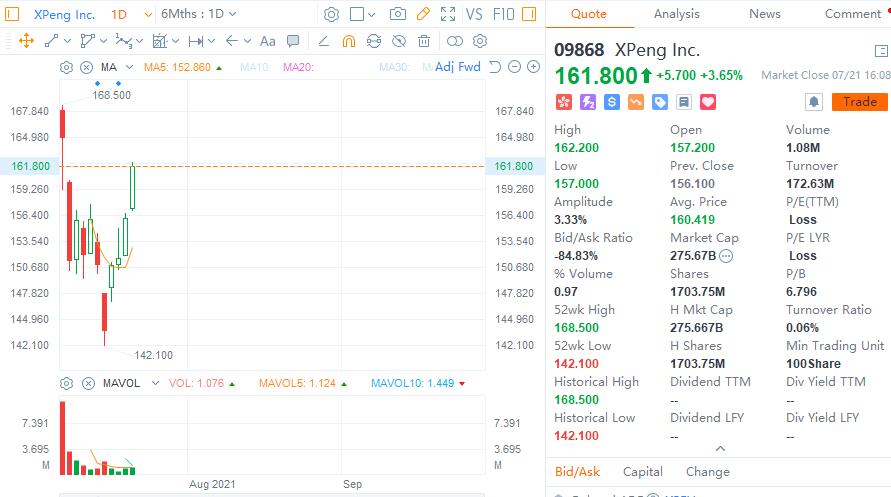 Alibaba is a key backer of XPeng, which has a 12 percent stake in XPeng with 14.6 percent of the voting rights, according to the latter's 20-F filing with the US Securities and Exchange Commission in April.

Last August, XPeng received over $300 million in funding led by Alibaba, just under half a month after XPeng's Series C+ round.

By that time, XPeng had completed 10 rounds of funding within five years of its founding, with Alibaba appearing three times.

In December 2017 and January 2018, Alibaba participated in XPeng's A+ and B rounds of financing, but then disappeared.

It was not until two and a half years later that Alibaba reappeared as a lead investor in XPeng's new round of financing.

NIO, Li Auto and XPeng Motors have all become leading electric vehicle companies in China because of the strong capital behind them.

Internet giant Tencent chose NIO and has been adding to its portfolio, while Li Auto is backed by online-service super-app Meituan and TikTok owner Bytedance.