Evergrande Auto, Evergrande's carmaking arm, fell 11 percent to a more than one-year low by the close of trading, after falling 20 percent earlier.

The company's stock has fallen about 80 percent since the Shanghai auto show on April 19. 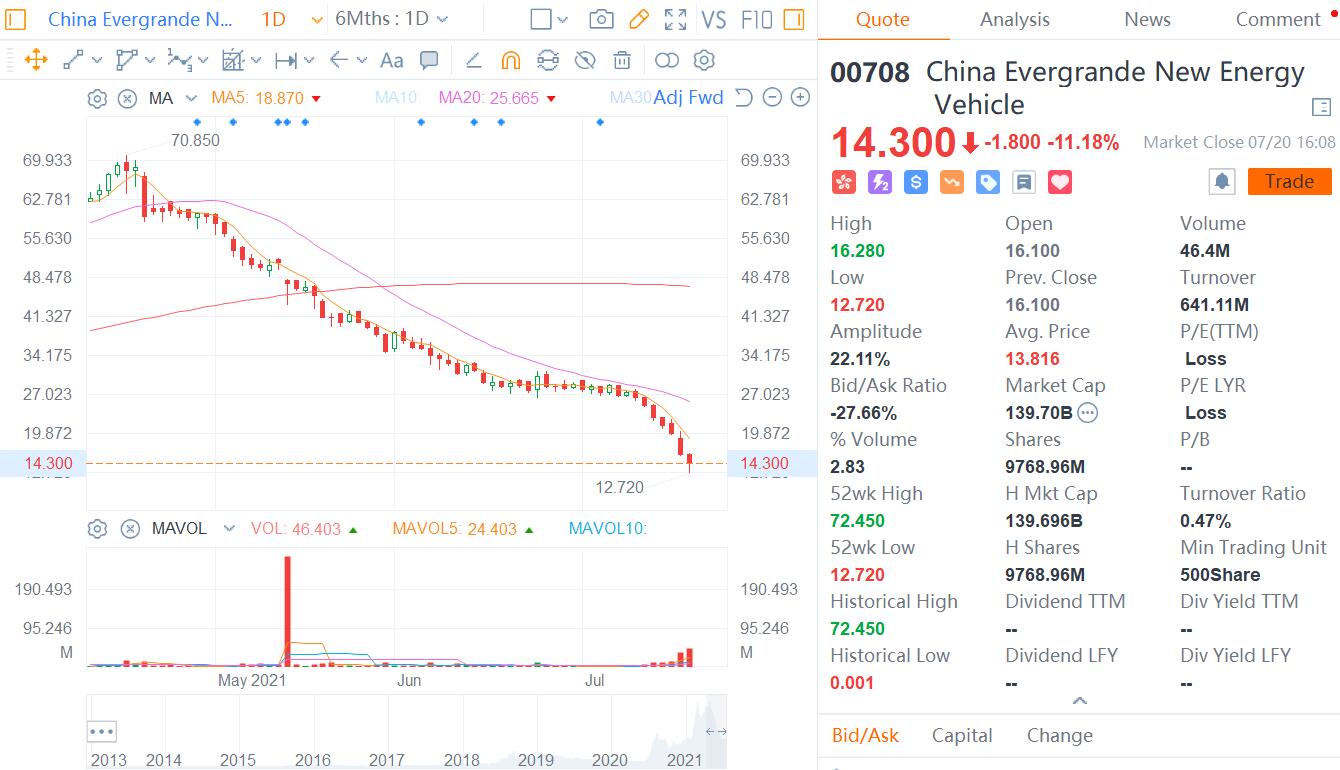 A branch of China Guangfa Bank in Yixing, Jiangsu province recently asked the court to freeze bank deposits of RMB 132 million of Evergrande Group and one of its companies, bringing Evergrande's financial situation into the spotlight.

The local court ruled that the assets be frozen and immediately enforced, to which Evergrande objected and said it would sue.

This is the latest piece of bad news for Evergrande.

On June 30, international rating agency Moody's downgraded Evergrande Group to "B2" and said that further downgrades are possible.

Moody's said that although Evergrande Group has been reducing its debt and improving its finances, it still has a large amount of debt due in the next 12-18 months.

Another international rating agency, Fitch Rating, issued a report on June 22, downgrading Evergrande Group's long-term foreign currency issuer default rating from "B+" to "B" with an outlook of "negative".

Evergrande Auto has also released some positive news after its flagship share price decline in the past three months.

On May 12, Evergrande Auto made its first public patent announcement, and on June 6, the company said it held a summer calibration test launch ceremony for its Hengchi 5 car brand at its Songjiang development base in Shanghai.

However, none of this news stopped the stock from falling.

In fact, the surge in Evergrande Auto's stock price had already raised questions about its overvaluation before that.

At the beginning of April, Evergrande Auto surpassed NIO to become the second most valuable car company in China, even though it had not yet started mass production of its vehicles.

At the close of trading on April 1, Evergrande Auto had a total market value of HKD 589.5 billion ($75.8 billion), higher than NIO's $6.22 billion market value, which is listed in the United States.

China's official media Xinhua News Agency said on March 28 that "the market value of a company reaches hundreds of billions of yuan before it sells a single vehicle" and that the valuation of new energy vehicles in the capital market is "inflated".

In 2020, Evergrande Auto released six models of Hengchi brand, including sedan, coupe, SUV, MPV, crossover and other passenger car models, and said it would achieve full mass production from 2021.

In February 2021, Evergrande Auto unveiled three more new models, bringing its product array to nine. To date, however, none of these vehicles have achieved mass production.