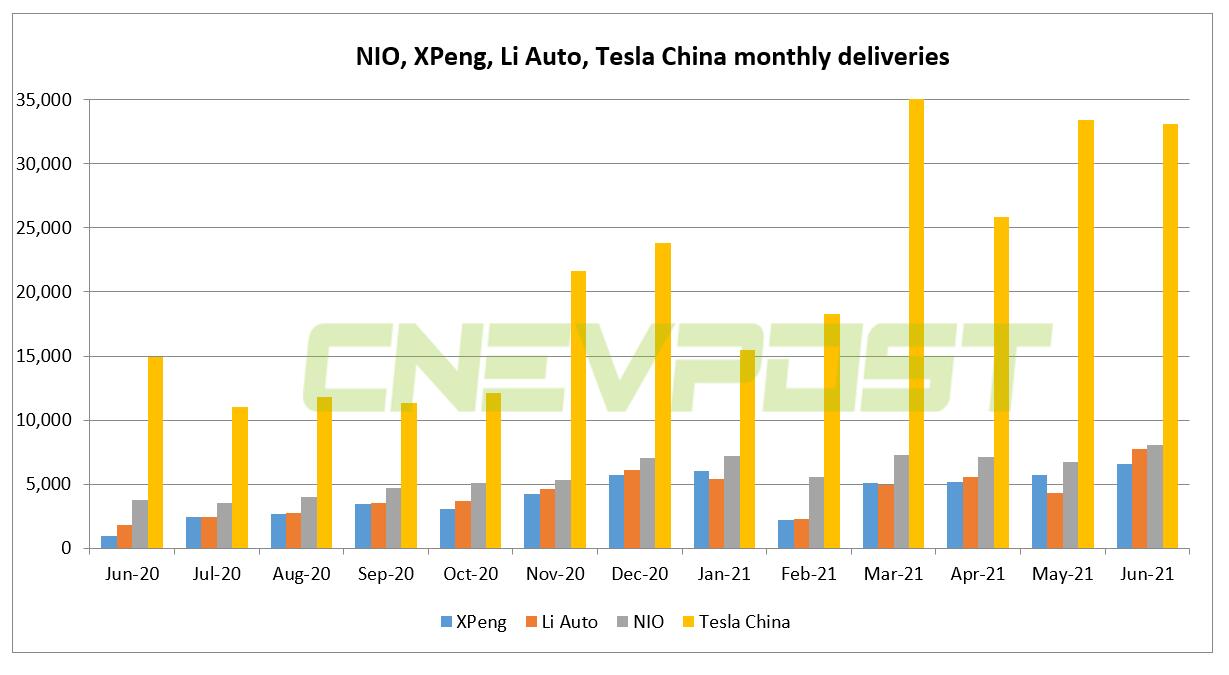 Whenever Tesla starts offering lower-priced models in China, there is always talk of the doom and gloom for China's new carmakers. In the analysts' view, this is overblown.

In terms of monthly sales, the new carmakers and Tesla are not competing with each other for the market, but are moving in tandem, analysts at Zhongtai Securities said in a research note released Tuesday.

The team listed data that have already been released earlier this month:

According to the China Passenger Car Association, retail sales of new energy passenger vehicles in China were 230,000 units in June, up 172.5 percent year-over-year and up 24.3 percent from the previous month.

NIO delivered 8,083 vehicles in June, with a cumulative total of 41,965 vehicles delivered from January to June.

Li Auto delivered 7,713 vehicles in June, for a cumulative total of 30,151 vehicles in the first half of the year.

XPeng Motors delivered 6565 units in June, with a cumulative total of 30,738 units delivered.

China's new carmakers are competing differently with Tesla in both meeting customer demand and pricing, the analysts said.

"We believe the overall gap between traditional carmakers and the new carmakers is narrowing in the new product cycle in 2021 and 2022 and in intelligence, which is a challenge Tesla will face in the Chinese market in the future," the note said.

The note mentioned that the China-made Model Y with lithium iron phosphate batteries is priced at RMB 276,000 ($42,650) and will start deliveries in August, which is expected to further open up Tesla's market space in China.

Tesla delivered about 25,659 units in Europe in June, up 206 percent year-over-year and 184 percent from May. "From the shipping data we track, Tesla has issued four new cargo ships in the third quarter as of July 14," the report said.

The model starts at RMB 276,000 after subsidies, down from RMB 347,900 for the previously lowest-priced model.

It is priced at RMB 291,840 before subsidies, which meets China's requirement that subsidized new energy vehicles be priced under 300,000 yuan.

Orders for the Model Y standard range version exceeded 10,000 on its first day of availability and more than 5,000 on its second day, lanjinger.com said earlier this month, citing a Tesla salesperson in Beijing.

Lower-priced Model Y reportedly gets over 10,000 orders on first day of launch in China