BYD's delivery volume is much higher than that of US-listed NIO, XPeng Motors, and Li Auto, but its market capitalization is not far away from them. In the analysts' view, BYD is expected to change this situation gradually.

Citi expects BYD to ship 50,000 and 60,000 new energy vehicles in July and August, respectively, and to continue to make growth this year, according to zhitongcaijing.com.

BYD figures released earlier this month showed it sold 41,366 new energy vehicles in June, up 192 percent from a year earlier and 26 percent from May.

The forecast for China's new energy passenger vehicle sales this year was raised to 2.8 million units from 2.5 million because consumers are more receptive to new energy vehicles than expected, Citi said.

Citi expects China's electric vehicle penetration to reach 15 percent by the fourth quarter and 35 percent by 2025.

Based on the sector and BYD's sales performance, Citi expects BYD's P/S ratio to be on par with EV companies including NIO, XPeng and Li Auto.

The P/S ratio is a stock valuation metric calculated by the ratio of a company's market capitalization to its revenue in the most recent year.

NIO's revenue for the past four quarters was $3.4 billion and its current market cap is $75.9 billion, corresponding to a P/S ratio of 22 times.

In comparison, BYD's revenue for the past four quarters was RMB177.9 billion ($27.5 billion), and its market capitalization in Hong Kong is HK$670 billion ($86.2 billion), corresponding to a P/S ratio of 3 times.

Citi maintained a Buy rating on BYD shares and raised its target price on BYD in Hong Kong by 13.9 percent to HKD 327 from HKD 287. That means Citi sees BYD's shares in Hong Kong with 40 percent upside from Tuesday's closing price. 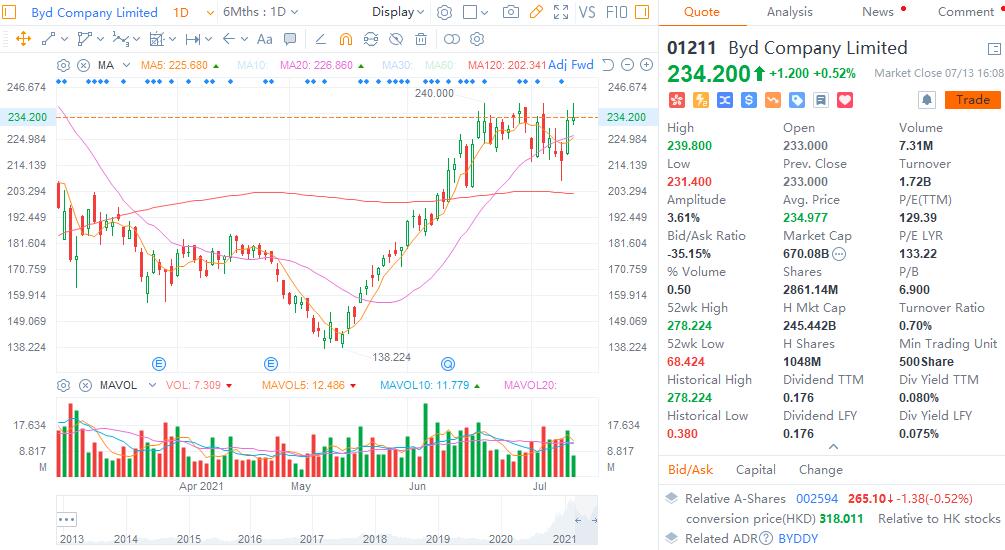