Chinese EV startup Neta aims for monthly sales of over 10,000

Judging from its current performance, Neta still has a long way to go to reach the goal of 10,000 units per month. 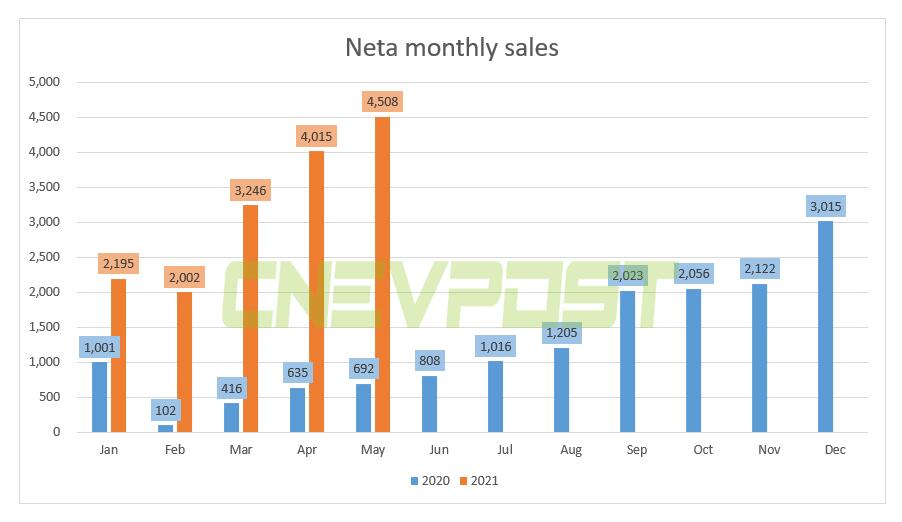 The Neta S, which is expected to be launched next year, is a coupe that will cost around RMB 200,000 yuan and may also be above RMB 200,000 yuan, he said, adding that Neta is becoming the Xiaomi of the auto industry.

Notably, Neta was previously unnoticed, but in May its deliveries surpassed Li Auto to become one of the top three among China's new car makers.

Li Auto, which had previously been ranked third in deliveries among China's new car makers, saw its deliveries drop about 22 percent to 4,323 units in May compared to April.

This resulted in Li Auto's third position being overtaken by Neta Automobile, backed by Qihoo 360, China's largest cybersecurity company, which delivered 4,508 units in May, up 551 percent year-on-year. Neta's cumulative sales reached 15,900 units in the first five months of the year.

The reason for the decline in Li Auto sales may be related to the launch of the new Li ONE, which has been optimized in terms of self-driving capabilities as well as hardware specifications, and began deliveries on June 1.

Join our Telegram group to be alerted the moment we publish an article: t.me/CnEVPost
#Neta#Neta Automobile
2
Comments (0)