Chinese electric car company NIO saw a slight drop in deliveries in May compared to April, which was seen as a result of the chip shortage that has been plaguing the industry. But that's not actually the reason, according to a new explanation from the company.

The main reason for NIO's small drop in sales in May compared with April was not a chip shortage, but the State Taxation Administration's (STA) change in the nation's auto invoice rules, eeo.com.cn quoted NIO co-founder and president Qin Lihong as saying.

Qin said this in a media interview on June 6, when NIO held the opening ceremony of its local NIO House in the northern Chinese city of Harbin, the most northern region the NIO House has touched in China.

Figures released earlier this month showed that NIO delivered 6,711 vehicles in May, up 95.3 percent from a year ago but down 5.5 percent from April. The company's deliveries in April also slipped 2 percent from the previous month. 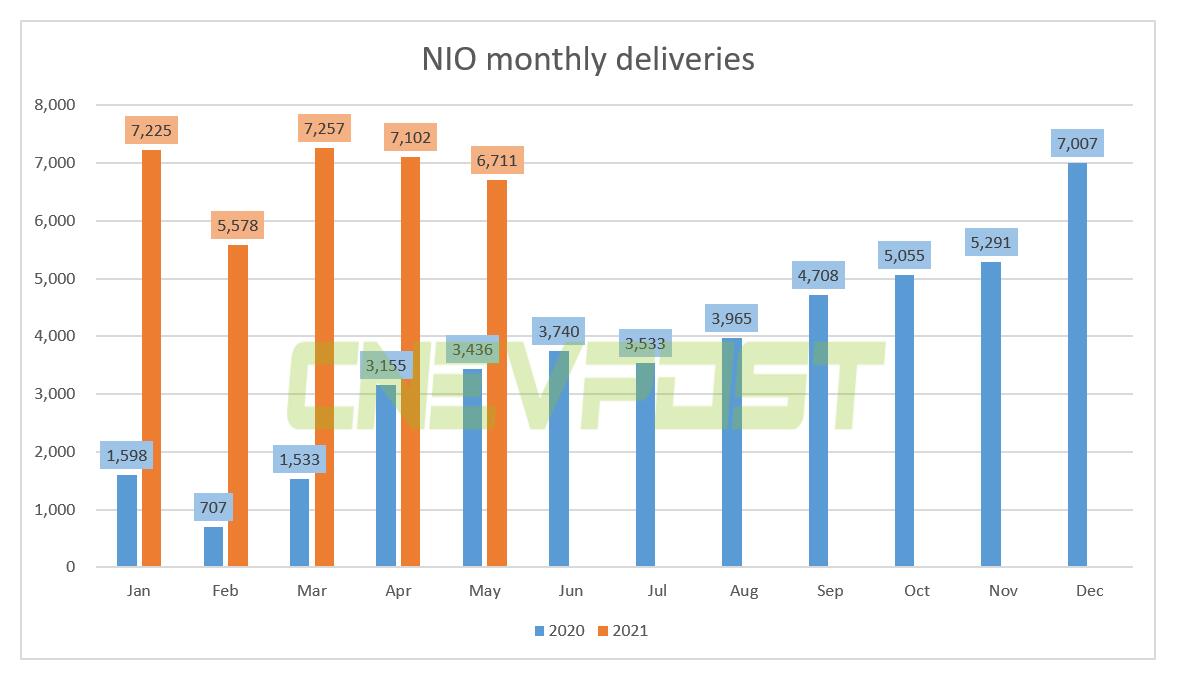 Qin said it took a while for car companies to adjust to the new rules introduced by the STA, and that affected NIO's statistics on sales.

The previous rules for issuing car invoices may have allowed some companies or dealers to exploit loopholes, leading to the existence of false invoicing, so in May this year the STA made a complete upgrade, the main content of which includes requiring car companies to provide the car's frame number and certificate of conformity before invoicing, Qin said.

Car companies have an adjustment period for the new system, and this upgrade will have a bigger impact on companies like NIO that do direct sales, Qin said, adding that this is because NIO is on an order system, and the company has a very tight process from the time it receives an order and starts production to delivery.

The change delayed NIO's average delivery time by four days, Qin said. Excluding invoicing, NIO would have basically been able to go from order receipt to delivery in a little more than two weeks in May, he said.

In fact, when NIO announced its delivery figures on June 1, it had mentioned that NIO's delivery in May had been briefly affected by supply chain fluctuations brought about by the chip supply and adjustments in the delivery chain.

Although the company did not give further details of the delivery chain adjustment at that time, it said that it would accelerate the delivery pace in June and that the delivery guidance for the second quarter would remain unchanged at 21,000 to 22,000 units.

Qin said NIO deliveries would rise in June as the company had more than 10,000 orders awaiting delivery.

After the temporary problems are solved, there will be no major problems when the delivery process is smooth, he said.

Qin also mentioned the chip shortage and repeated an explanation previously mentioned by William Li, NIO's founder, chairman and CEO, saying that NIO is not short of a particular chip, but that the chips in shortage are not quite the same every week.

The truth is that the automotive industry has faced chip shortages for the past three quarters, but the chips in short supply are different each week, Qin said.

"It's like a restaurant cooking, where there is a shortage of cooking oil now, but next there may be a shortage of vinegar. The impact is in some areas, but persistent. We estimate the impact of chips in June will be about the same as May for us, but it can be overcome," Qin said.