CLSA analyst Soobin Park initiated coverage on NIO with a Buy rating and a $50 price target, implying a 26 percent upside for the stock from Thursday's close of $39.57.

The analyst says NIO is signaling a new direction to the new luxury electric vehicle, global and even mobile markets.

After establishing itself as a maker of premium electric SUVs in just seven years, it is now planning to enter the sedan segment and will have a European presence, the analyst noted.

The analyst said they believe NIO's innovative battery charging model may be the main attraction for users and sets it apart from other high-end electric vehicle makers, as does its investment in future technology.

NIO rose 3.3 percent to $40.89 in early trading Friday, after the stock gained about 11 percent over the past week. 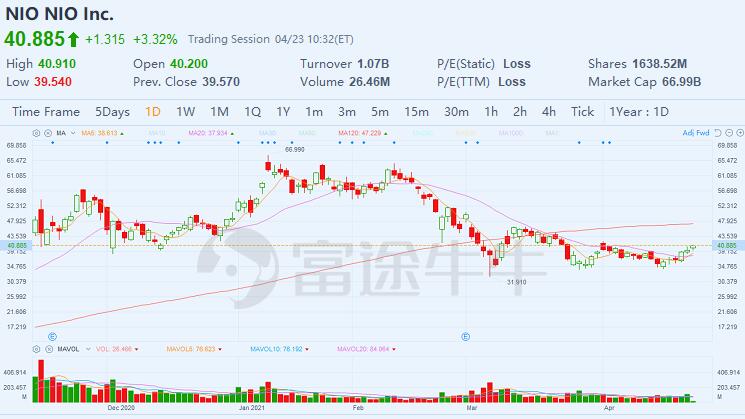 There could be a series of catalysts affecting NIO's stock next week.

Construction will start on April 29 at the Hefei Xinqiao Smart Car Industrial Park, which will include NIO's new plant, and the company is likely to announce its launch of electric vehicle production expansion plans at that time, Chinese financial media wallstreetcn.com reported Friday.

CnEVPost reported earlier this month that construction will begin on April 29 on a smart electric vehicle industrial park that NIO is jointly responsible for with the city of Hefei, where it has its headquarters in China.

April 29 is also the date when NIO plans to announce its first-quarter financial results. It accumulated 20,060 deliveries in the first quarter and exceeded 20,000 units for the first time in a single quarter.

In addition, NIO co-founder and president Qin Lihong said the company will officially announce its European expansion plans on May 6-7, according to automotive media 42HOW reported last week.

Unlike in the Chinese market, some services, such as One-Click for Power, will be charged in the European market, the report said.