After a sustained pullback from the end of January to the beginning of March, the stock price of Chinese electric car company XPeng Motors (NYSE: XPEV) has seen a wave of gains since March 9.

So has there been any change in XPeng's fundamentals in that time? Deutsche Bank analyst Edison Yu's team gave their answer on Monday.

The team hosted a virtual investor meeting with XPeng's Managing Director of Strategy Charles Zhang last week and found that management is confident in its demand trajectory.

While the supply chain may be tight in some areas, XPeng does not expect any meaningful impact on its product launch schedule this year, Yu's team noted.

In the long term, XPeng management expects the price of XPILOT to increase in the future, beyond the current RMB 20,000 yuan. 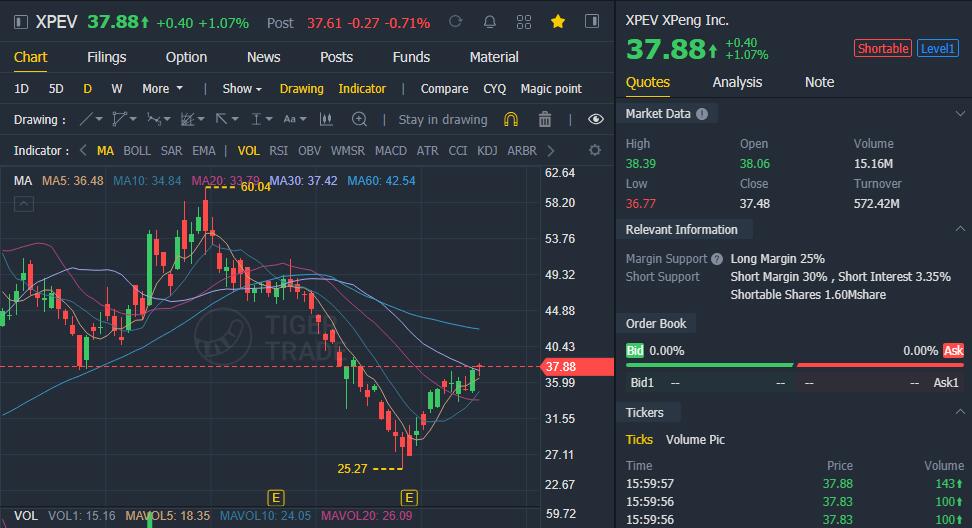 Here are their key takeaways from the meeting:

XPeng will unveil its third model in April (smaller sedan, similar to Camry/Passat) with production starting in 4Q21; this vehicle will have LiDAR as an option, supplied by Livox (materially below $800 cost).

For the existing models (G3 and P7), there are lower price LFP battery variants now available for order and will be delivered in 2Q. The G3 will also get a mid-cycle exterior refresh in 3Q.

Capacity wise, there will be 3 models being produced by year-end at XPeng's Zhaoqing plant which has 100k capacity on 1 shift and 180k on 2 shifts; the G3 was originally produced by a partner but with the mid-cycle refresh, it is being insourced.

Beyond that, XPeng will launch a larger SUV in 2H22 which will be produced at its 2nd plant currently under construction in Guangzhou (~100k capacity).

The take-rate for XPILOT 3.0 software is ~20% for the P7 and utilization of NGP in relevant scenarios is roughly 50%. XPeng thinks adoption should increase as customers become more aware of functionality.

In fact, the order intake for LFP based P7 shows that about half of customers are choosing the XPILOT 3.0 trim, suggesting the take-rate is already trending up. NGP usage reached 1 million kilometers within the first 25 days of roll-out and XPeng will hold a 3 kilometer highway expedition from Guangzhou to Beijing showcasing NGP capabilities.

Memory parking is slated to be ready in 2Q and allows for vehicles to automatically park in indoor garages. Demos will be shown before the official OTA launch.

Looking ahead, XPeng's 3rd model will have an upgraded hardware sensor suite (LiDAR) that will be able to OTA XPILOT 3.5, likely in early 2022.

This vehicle will still use the Nvidia Xaiver chip so will not be upgradeable to XPILOT 4.0 in the future unless the chip set is swapped out for Orin. Feature wise, 3.5 will have greater coverage on highways and also can handle major city roads (e.g., the equivalent of Broadway or Fifth Avenue in NYC) but not small complicated streets (Chinatown, Wall Street).

For 4.0, XPeng has completed the hardware design which will be unveiled with the 4th SUV model in 2022; the software will be released in 2023, aiming to tackle full city driving.

More generally, management believes it has several advantages in autonomous driving development, most notably a fully custom-built software stack, allowing for quick iterative updates as data is collected from the fleet (corner cases) and also expects to raise pricing for future software upgrades relative to current 20k RMB;it wants to hold off on launching a subscription service to avoid adding complexity into buying process for now.

Currently, the government only allows for Level 4 testing in designated areas but this is an evolving process and XPeng believes the government is fairly open minded in updating regulations. We note there are cities now allowing for driverless robotaxi fleets to operate.

Liability is essentially with the driver in all cases where there is a driver present so XPeng limits hands-free driving to about 30 seconds (driver must touch steering wheel within that amount of time; if the user violates this too often, the function turns off for period of time) but as functionality become more advanced, management believes it can increase the time interval beyond 30 seconds.

Another aspect of the regulatory situation in China is that all data collected from the vehicles must stay in China, potentially limiting development efforts by foreign entities.

Battery cell supply should be ample as XPeng has 2 dedicated lines from CATL for NCM chemistry and 1 for newly launching LFP.

Cell costs were down about 15% YoY in 2020 and company expects a double-digit reduction over the next few years.

On the semiconductor shortage, it believes higher-end chips from QCOM and NVDA should see stable supply but indicated there is a lot pressure on Tier-2 components.

Management believes the technological capabilities of its vehicles will define its brand; it is targeting the 150-350k price segment and believes its product cycle time is much faster than legacy automakers (2.5 years vs. 3-5 years).

As the market gravitates toward "Smart EV," it believes traditional branding will matter less and less; its primary focus is leveraging online/social media platforms and also demonstrations of its autonomy features.

Exiting 2020, XPeng operated 159 Supercharger stations and plans to boost this to >500 by end of 2021; these are exclusive to vehicle owners.

For the fourth model, XPeng will replace IGBT inverter with silicon carbide solution, which should enable higher range efficiency and faster charging.

It believes margin will increase, driven by higher volumes/scale, higher software contribution and attach rates, and the potential to monetize content as fleet grows.

Join our Telegram group to be alerted the moment we publish an article: t.me/CnEVPost
#Stock Ratings#XPeng#XPeng Motors
1
Comments (0)