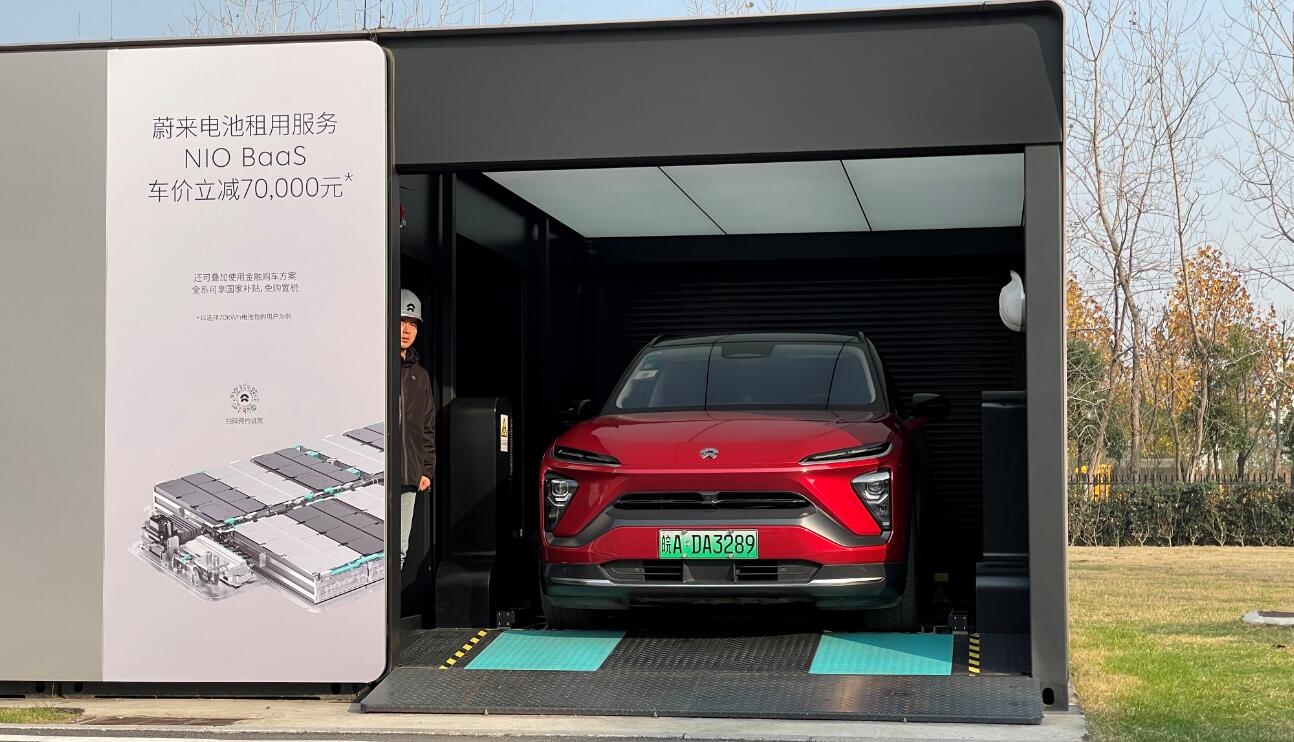 Will Tesla get involved in the battery swap business? This has been the focus of much discussion among Chinese Internet users recently, and the company's executive has elaborated.

Grace Tao, Tesla's vice president of external affairs, said on Weibo Saturday that Tesla tried the battery swap model in 2013 and that it was a good way to replenish energy for specific areas like cabs or buses, but that "We've always believed that the charging model is the best way to replenish energy for large-scale use of civil electric vehicles."

Tao also drew an analogy to the electronics industry, saying that 10 years ago many products were equipped with removable batteries, but now the vast majority of electronics products offer integrated internal batteries, and the way to replenish energy has shifted from battery replacement to high power fast charging.

Tao believes that the standard of charging interface is unified, and even for the same brand the form of the battery may be very different, which allows charging to have better efficiency.

Here is the full translated version of Tao's Weibo post:

Recently many of you have been concerned about whether Tesla will start a battery swap business, thank you very much for your concern.

You can see that ten years ago, many of the electronic products we used were equipped with removable batteries, and at that time a cell phone needed two batteries.

Nowadays, the majority of cell phones, computers, and other electronic products use integrated built-in batteries, and the way to replenish energy is also shifted from battery replacement to high-power fast charging. This is the result of the deep thinking of electronic product manufacturers according to the development trend of technology and product logic.

We believe that increasing the layout of charging piles and improving charging efficiency is the best solution for users' charging anxiety.

The development of batteries is changing rapidly, and various models and brands of batteries are emerging, even different models of the same brand are likely to be different in terms of battery form. And the national standard charging interface is consistent, which will greatly enhance the efficiency of replenishment.

Tesla's latest V3 supercharging technology is capable of replenishing up to 250 km of range in 15 minutes. Users can replenish basically a week's worth of power for an in-town commute in the time it takes to drink a cup of coffee. 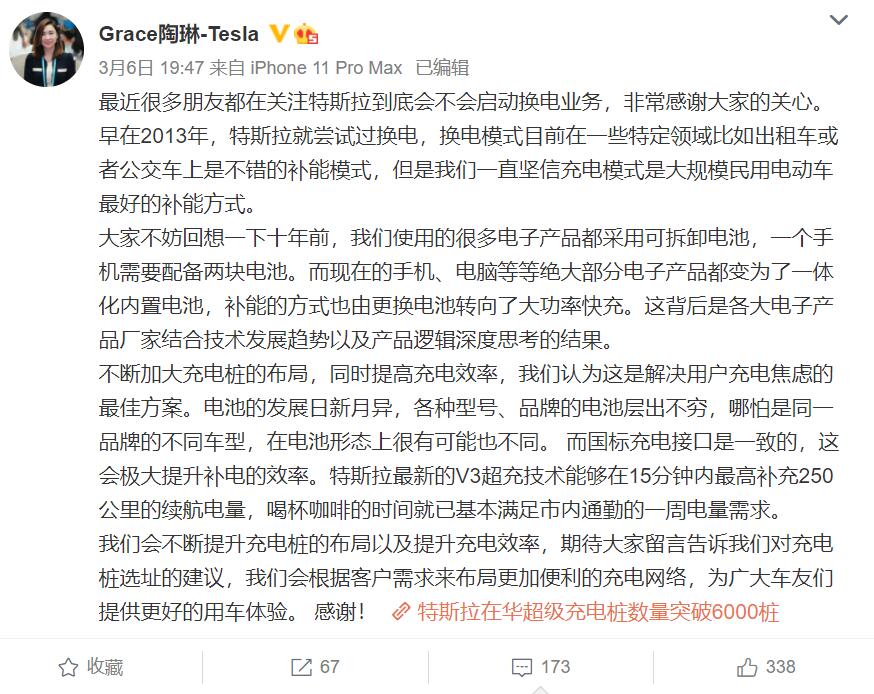 Beijing Business Today said in a report it means Tesla is now eligible to offer battery swap service options for its models in China or to sell new energy vehicle battery swap facilities to other third-party organizations.

But the report cites Tesla sources as saying, "Tesla will not adopt battery swap."

But Tesla eventually withdrew support for battery swap because of the high investment and meager revenue involved in building battery swap stations.

The Chinese government mandated last April that new energy vehicles priced at no more than 300,000 yuan ($46,420) be eligible for the new round of subsidies, but models that support battery swap mode are not subject to that rule.

Since its inception in 2014, NIO has developed a unique model with a battery swap, in addition to supporting fast charging like Tesla.

Battery swap wasn't NIO's first creation. The bankrupt BetterPlace had ambitions to be the “gas station” for electric vehicles, operating its own battery assets.

But BetterPlace didn't enjoy the environment to support its model at the time, and eventually pulled out.

For electric vehicles, battery swaps demonstrated the tremendous benefits of replenishment and the ability to extend the life cycle of the vehicle.

Then NIO came up with the idea of rechargeable, replaceable and upgradeable models, which is now the company's core strength.

Regarding the advantages of battery swap, William Li, the founder, and CEO of NIO, said in an interview last November that battery swap undoubtedly has its special advantages in many scenarios, such as in highway service areas or when users do not have charging piles at home.

In a densely populated area with dense cars, if a battery swap station is deployed, it can serve hundreds or thousands of car owners, which is very efficient, he said, adding NIO believes that charging is the foundation and the priority for NIO vehicles to replenish energy.

However, the battery swap model needs to face the problem that because of the large initial capital investment, it is difficult to make a profit before achieving the scale effect, which requires a balance between investment and return.

In this regard, Li believes that all innovative service models have this problem. There is no business that makes money right away, there is no such business in the world.

"Not only the battery swap station but also the deployment of charging piles face this problem. The Internet had this problem back then, such as the logistics system of JD.com. You need to invest first so that users can enjoy a good experience, and when the scale comes up, it will be OK," Li said.

"Last year we saw very few people going to battery swap stations, and this year they started lining up, that's actually the reason, it has a process."

Li said NIO is not looking at battery swap as a profitable thing to do in the short term, but as a cost and expense to consider, and is not separately calculating when it will be profitable.

Li said, for users, NIO provides them with additional options, they can freely choose to rent or buy batteries according to their own consumption habits and financial situation.

Several Chinese cities are already pushing for a solution to the problem of the lack of a uniform standard for the battery swap model.

In a December report, the Shanghai Securities News quoted industry insiders as saying that the main reason for the battery swap model's rapid popularity in China is technological progress. With the rapid development of battery technology in recent years, the battery swap model has gradually gained the trust of society and is expected to launch a unified standard.

Last August, a recommended national standard for electric vehicle battery swap safety requirements led by NIO, the Beijing Electric Vehicle Co., Ltd. (BJEV) which is a subsidiary of the BAIC Group, and China Automotive Technology and Research Center, has passed the review by the National Technical Committee of Auto Standardization.

The move will provide guidance for the development of electric vehicles with a battery swap model.

According to the standard, by analyzing the differences between different technical schemes, actual vehicle operation scenarios, and operation data, the minimum number of battery swap requirements of 5,000 times (snap type) and 1,500 times (bolt type) are specified to ensure the safety of the user during the design life of the vehicle.