Chinese electric carmaker NIO delivered 5,578 vehicles in February, down 22.8 percent from January, amid large fluctuations in deliveries due to the Chinese New Year.

From January to February, NIO delivered a total of 12,803 vehicles, up 455 percent from 2,305 vehicles in the same period last year. 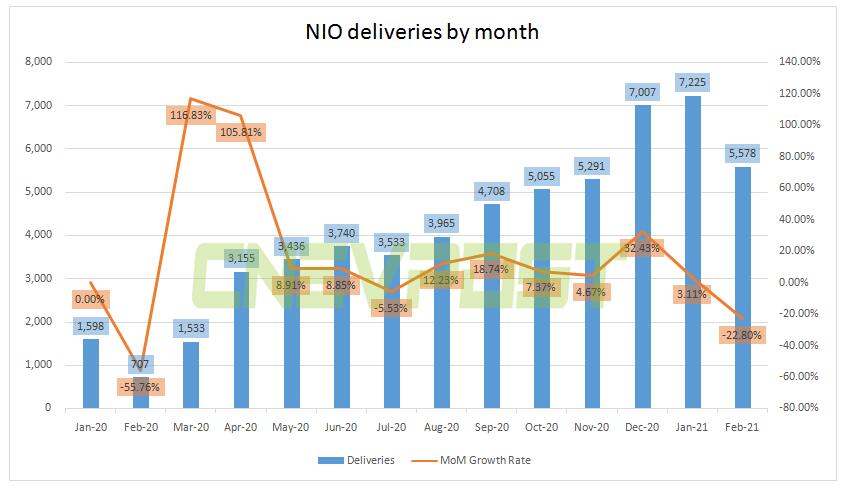 It's worth noting that January through February is traditionally a slow period in the Chinese auto market, and the Chinese New Year holiday during this period can make deliveries volatile.

Last year, the Chinese New Year holiday ran from January 24 to January 31, and this year, it runs from February 11 to February 17.

NIO delivered 7,007 new vehicles in December last year, up 32.4% year-over-year and the fifth consecutive month with the brand's highest number of deliveries in a single month.

This figure represents a 121.0% year-on-year increase and the ninth consecutive month of year-over-year doubling since April of this year.

XPeng today also announced that it delivered 2,223 vehicles in February, down 63 percent from January. XPeng said February is traditionally a slow sales month due to the Chinese New Year holiday.

The XPeng P7 delivered 1,409 units in February, bringing cumulative deliveries to 20,181 units and making it the fastest model from a new carmaker to surpass 20,000 deliveries, the company said.

XPeng delivers 2,223 units in February, down 63% from January