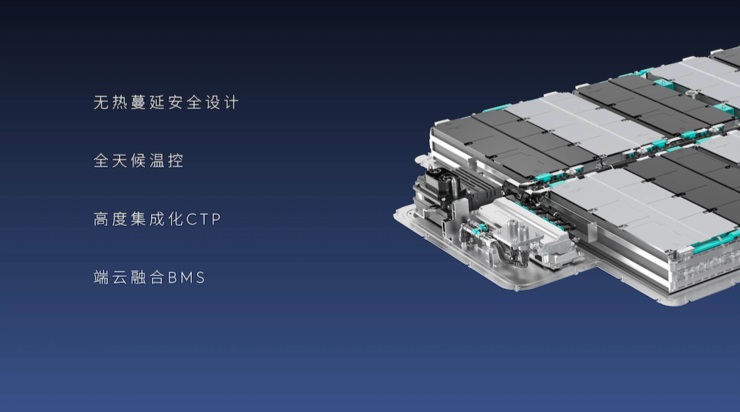 Following the BaaS (Battery as a Service) announcement on August 20, Chinese electric vehicle (EV) maker NIO (NYSE: NIO)  announced the 100kWh battery pack on November 6, making it the second car company in the world, after Tesla, to release a 100kWh battery pack.

After a lot of hard work by NIO and CATL over the past year, the battery pack is finally available and its performance, cost, and upgrade options have been further revealed.

For new energy vehicles, battery safety is a constant topic in the industry. NIO has its own considerations in this regard - the highlight of this 100kWh battery pack is the adoption of a heat spread-free safety design.

Based on this design, the thermal runaway sensor detects an abnormality and triggers an "alarm" that actively cools down the battery, while the "firewall" between the cells prevents the battery from affecting other components in the event of thermal runaway.

NIO says that this may be the world's first battery pack to use a thermal runaway sensor.

NIO has also developed a unique design for each of the two scenarios of a battery fire," said NIO's Assistant Vice President of Battery Systems, Mr. Senzel Tsang.

In other words, based on the above design system, NIO's 100kWh battery pack can basically achieve "only smoke, no fire".

This may be a first, but NIO chairman and CEO William Li Bin also said that everything is a probability, NIO will minimize the probability of fire, but will not make the promise of "never catching fire".

The performance of the battery may vary depending on the climate, and NIO has optimized the temperature control function to maintain the stability of the battery.

Based on CATL CTP (Cell to Pack) technology, the NIO 100kWh battery pack achieves a 19.8% increase in volume utilization, a 37% increase in energy density, a 17.8% increase in thermal management, and a 40% simplification of manufacturing and assembly in a more compact environment.

Li's claim is not an empty one. 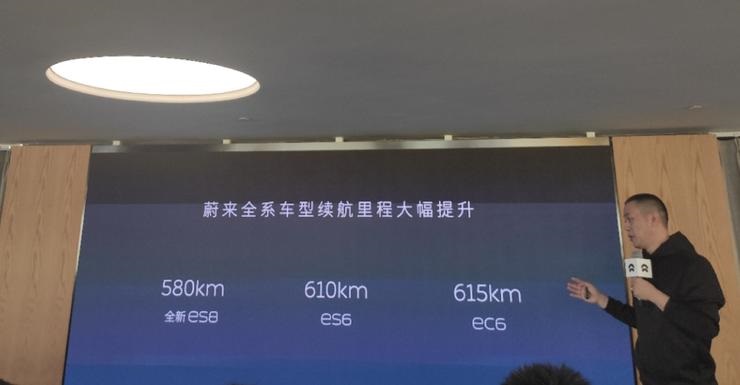 Although the 100kWh battery is new, Li says that even older NIO owners of the founding ES8 will be able to take advantage of the battery pack's enhancements.

With the new 100kWh battery pack, the range of the old ES8 can be increased from more than 300km to 500km. For many users, 500 kilometers is already sufficient for daily use.

This is what's happening at Tesla, NIO and XPeng stores in Shanghai

The 84kWh battery in the NIO product lineup seems to have received less attention than the 100kWh and 70kWh battery packs. Li also responded to this by saying:

Even though 84kWh can increase the range to some extent, but for the future of the whole battery swap system, too many battery pack varieties will affect the efficiency, so we also hope that people can upgrade to 100kWh.

What users are most concerned about is not only the range but also how to upgrade and the cost. At the press conference, Li also gave a detailed introduction to the issue. Since the 70kWh battery pack on the market has a larger circulation, Li also used 70kWh and 100kWh as examples.

Non-BaaS users will have to pay a one-time upgrade fee of RMB 58,000 (points are supported). 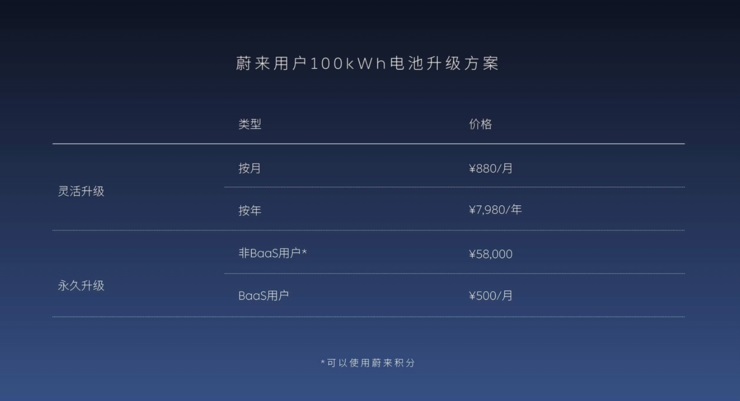 If you are a new customer and have not yet bought a car, you will also be charged at the same price as above. The optional 100 kWh battery pack will cost RMB 58,000 more than the current price of a new car; if you choose BaaS, the price will be reduced by RMB 128,000 and you will pay RMB 1,480 per month for battery rental.

Note that the permanent 100KWh battery pack upgrade went live on November 7 at 10:00 a.m. and is expected to be delivered on an order-by-order basis starting in December 2020.

Behind these numbers, NIO also brings its own sincerity to the table.

Li said that in order to cater to the upgrade needs of 84kWh owners, the originally announced price for a permanent 84kWh upgrade to the 100kWh battery pack was RMB 10,800, but now it's only RMB 5,400 with a 50% discount and you can use NIO points.

ES8 Founding Edition users and ES8 users who pay Dating before March 31, 2019, can enjoy a 60% discount on battery upgrades, and the benefits can be used for permanent upgrades or flexible upgrades.

If owners who meet the above conditions choose to upgrade on an annual basis, the annual upgrade cost will be less than RMB 5,000.

Li also gave his own explanation as to why he didn't offer the daily upgrade option. In his view, the daily upgrade is technically feasible, but battery supply is an issue that would put tremendous pressure on operations.

Now, with the BaaS solution on the ground and the release of the 100kWh battery pack, the "separation of body and battery, battery rental, rechargeable, battery swap support, and separability" that NIO has been advocating has reached its goal.

At the press conference, Li revealed that NIO has more than 60,000 users and has accumulated 1.158 billion kilometers of driving range, covering almost every city in China - all these figures are supported by the NIO battery swap system.

But the existing battery swap stations may not be enough, in Beijing, Shanghai, and other first-tier cities, each station will conduct an average of about 60 times a day battery swap service, during peak hours there is already a situation of queuing battery swap.

CNBC's Jim Cramer on NIO: I admit that I was late to the party

However, at present, the 100kWh battery pack is still in the stage of capacity ramp-up, scale delivery may have to wait until December, and priority will be given to new car option users and permanent upgrade users.

Under the flexible upgrade approach, annual upgrades are expected to be available in February next year; monthly upgrades will have to wait for the system to be connected, and the time is expected to be extended to April next year.

A new era has begun, as NIO's market cap surpasses that of BMW