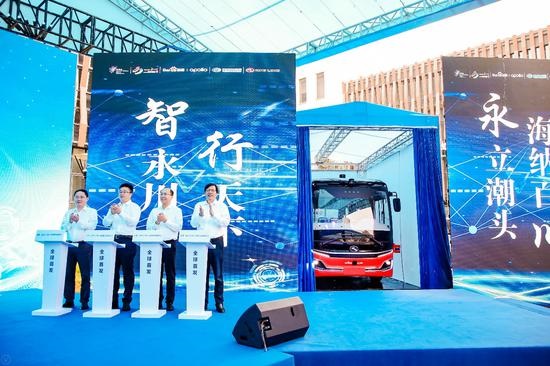 The Western Autopilot Open Test Base is located in the heart of Yongchuan, Chongqing, and is fully deployed with a 5G communications network environment.

It has built more than 30 open road test scenarios, including overpasses, tunnels, and bridges, typical of a mountain town, and can host 200 smart cars for testing.

With the start of operations in the western base and Baidu Apollo's manned test operation in Chongqing, Chongqing residents will soon be able to ride in Baidu's automated bus Robobus and automated taxi Robotaxi -Apollo Go.

During the Chongqing Smart Expo in August 2019, Chongqing Yongchuan District People's Government, Chongqing Vehicle Inspection Institute, and Baidu have agreed to cooperate on the construction of the "Western Automated Driving Open Test Base”.

The overall plan of the project will be to build a vehicle-road collaboration test demonstration area of no less than 20 km in both directions within the 20 square kilometers of the new city area of Yongchuan with about 180 km of roads in both directions.

The project will be divided into two phases, the first phase of which is a 10 km two-way roadway collaboration test demonstration area has already been completed.

In the area of the Autopilot Open Test Base, tests and demonstrations of 20 L4-class autopilot vehicles have been conducted in five application scenarios.

These include FAW Hongqi and Ford Lincoln Robotaxi, which are operated by Baidu in multiple locations, as well as Robobus, an automated bus jointly built by Baidu and Xiamen King Long, and the driverless sanitation vehicle built by Baidu and Qingling Motors.

Among them, the world premiere of Robobus, an L4-class automated bus, was the third model created by Baidu and King Long.

The Robobus is equipped with precise parking capability to achieve precise stopping, and can easily cope with bus stop scenes and more complex urban road conditions.