The upcoming Tesla system upgrade will not only have enhanced entertainment functions, but also Smart Summon, adjacent lane speed, voice-controlled seat heating and other functions, according to a Weibo user.

Among them, the Smart Summon function can control the vehicle to your location (using the GPS signal of the mobile phone as the destination) or your designated location, and can avoid obstacles and parking according to the actual situation of the road, according to @小特叔叔.

The Smart Summon feature was rolled out as part of the Tesla software update 10.0 in the US in September. It allows Tesla owners to press a button in the Tesla app on their phone, and their car will drive itself to their location from a maximum distance of 200 feet, even navigating obstacles. In a tweet last week CEO Elon Musk said the feature was "improving rapidly." 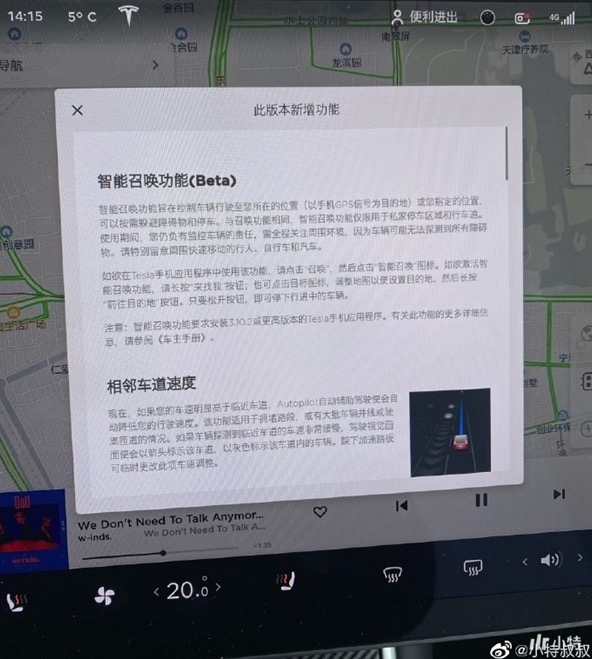 The new adjacent lane speed function can be used in congested sections or when a large number of vehicles are on-line or off the ramp. When the speed is detected to be higher than the adjacent lane, the speed is automatically reduced. The driving interface will mark the lane with an arrow. Press the accelerator pedal to temporarily change this speed adjustment.

Video demonstration of Smart Summon function can be found here.

It is understood that this update is only for domestic EAP users, and it is expected that it will be officially pushed to car owners in a large area in one to two weeks.

Tesla said last week that it will provide more video and gaming content to Chinese customers next year, and will provide online games on its vehicles for the first time.

Tesla showed off new entertainment features for its vehicles via an over-the-air upgrade today, adding three new games -- Happy Landlord, Happy Mahjong, and Happy Upgrade, and video streaming sites Youku and Bilibili. This upgrade is expected to be officially launched to Chinese car owners in the first quarter of next year.

Tesla said that these games can only be started after the vehicle is parked. Often, car owners use entertainment products while charging their cars or get addicted to them on the way home from work.

Tesla said on Decmber 20 that it will provide more video and gaming content to Chinese customers next year, and will provide online games on its vehicles for the first time.