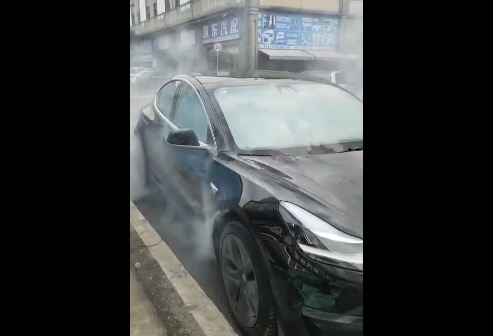 On Sunday evening, a Weibo user posted a video of Tesla Model S being surrounded by smoke and caused widespread concern.

Tesla responded today that the smoke in the video is not because of fire but that the vehicle is sterilizing and deodorizing and the smoke is the atomizing effect produced by the sterilization equipment in the car.

The battery of the Tesla Model S is located at the bottom of the vehicle. It uses a sealed 18650 lithium cobaltate battery provided by Panasonic. At the same time, in order to protect the battery pack, Tesla is also equipped with a bulletproof protective shield to ensure the safety of the battery.

Tesla vehicles have caught fire in the past, but typically only after a crash when the car's battery pack has been damaged.

Spontaneous combustion of an intact battery pack would be highly unusual, but not impossible. Tesla has claimed in the past that an electric car is ten times less likely to catch fire than a vehicle powered by gasoline.

Earlier this year CCTV footage captured a Tesla Model S launching into a blazing inferno in just seconds in a parking bay in China.

The upcoming Tesla system upgrade will not only have enhanced entertainment functions, but also Smart Summon, adjacent lane speed, voice-controlled seat heating and other functions, according to a Weibo user recently.