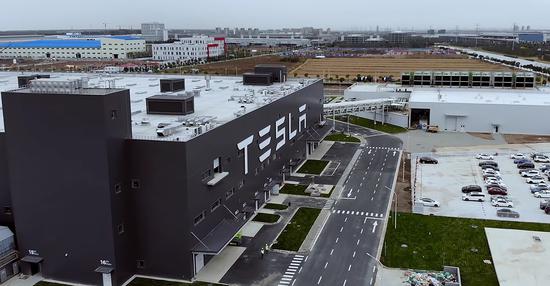 Tesla's Shanghai-based Gigafactory 3 may still be waiting for final approval before it can begin delivering locally produced Model 3, but construction of the plant is still accelerating with battery production facilities almost completed and more and more Model 3 parked at the area.

According to NetEase Tech, the first phase of the Shanghai plant has been completed, the ground and roads have been completely paved, the lawns around the plant have been planted in place, and many Tesla cars are parked around the complex.

Perhaps the most impressive is the second-phase engineering area of the factory, which is responsible for the production of battery modules.

The second phase of the project only started around the end of the third quarter of 2019, and the latest progress is particularly impressive.

At the beginning of September, there was only one piece of land in the entire second-phase area, but after 12 weeks, the exterior of the huge production facility is now almost completed.

Given that Tesla was also busy debugging the Model 3 production line during this time, this is also amazing.

In addition to the rapid progress of the second phase of the project, more and more Chinese-made Model 3s have been seen in the parking lot between the complex and the battery production facility.

About 100 Model 3s are parked in the parking lot. Tesla has obtained a mass production license from the Chinese government, and the plant is likely to produce more Model 3.

According to media reports, based on the first three quarters of performance and combined with fourth-quarter revenue expectations, it is expected that Tesla's total revenue in 2019 may exceed $ 25 billion.