If you strip all the premium features away and treat ET5 as a normal car, it is still a very compelling proposition.

This is a guest post by Haoran Zhou, previously a member of NIO's PR team in China. The review was originally published as a video on the YouTube channel Telescope望远镜.

Every week Telescope brings you fresh insight from the biggest car market in the world. Today’s car is the NIO ET5, the very latest chapter in NIO’s production car journey.

Telescope has covered the ES8 on its channel before, if you haven’t watched that review, click here to have a look because the ET5 still shares many basic concepts with the ES8.

NIO’s first electric saloon the ET7 delivery started on March 2022. That is a 5.1-meter executive saloon going up against Audi A6, Mercedes E Class, and BMW 5 Series, but we all knew that the volume seller is going to be the ET5: a medium size saloon, sporty, dynamic, relatively lower prize at 46,000 US dollars.

I wrote the press release of this car while still working at NIO, went on the test session with the vehicle engineering team, and did a static design workshop and the national media test driving, so you will be well informed.

Personally, I still refuse to charge on the highway. The infrastructure, even in China, is just not ready. There are too many factors out of control. Is there a charger installed? Is it reliable? Is it fast? And most importantly is there a queue? Because the queue in a charging station is different than the petrol station. A charge on the highway is half an hour at minimum. 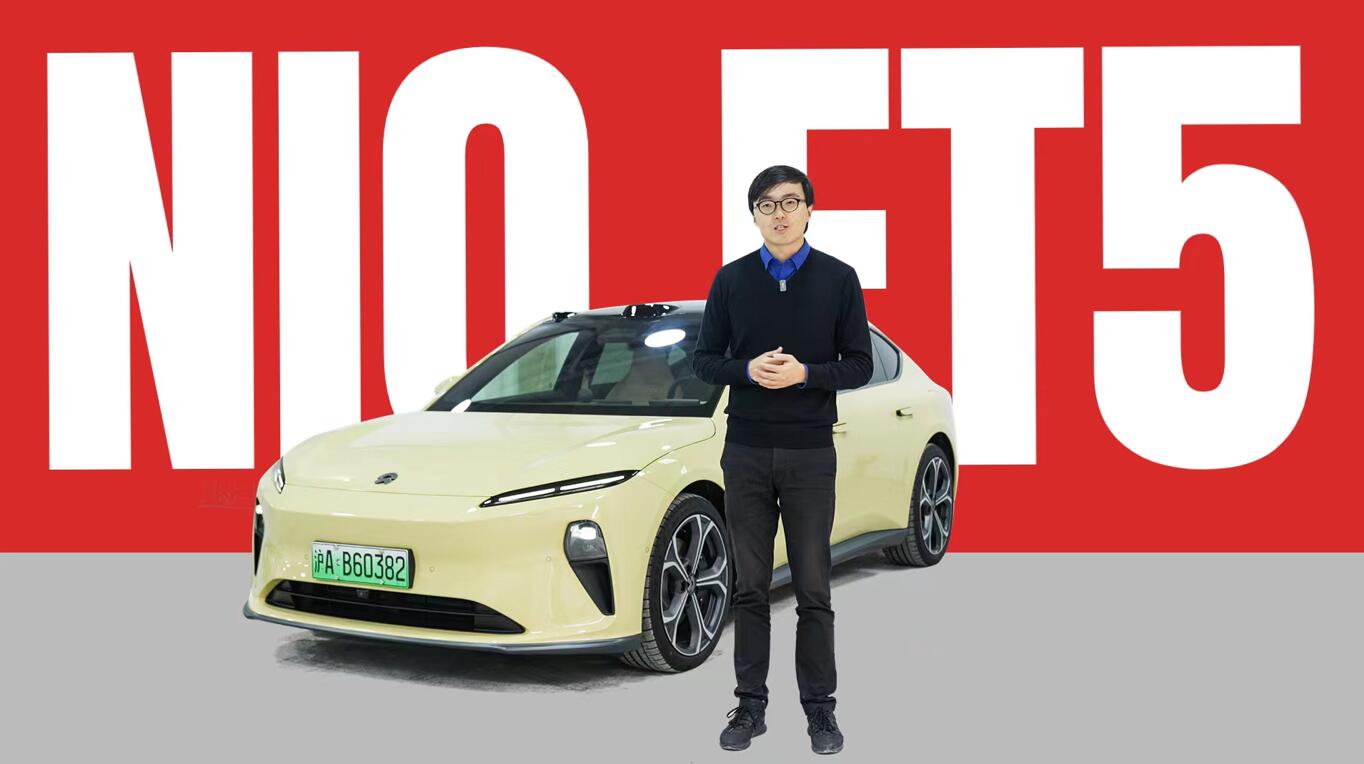 Meanwhile, battery swap is fast and fully automatic, and as the major selling feature, you can be sure NIO will inspect and maintain the facilities to a much higher standard than the public chargers.

The ET5 is the cheapest NIO car that can battery swap, and of course, is compatible with all the batteries released by NIO so far. By purchasing this car, you have access to one of the most impressive EV infrastructure networks in the world.

If you think all of this is irrelevant to the international audience, NIO has built a factory in Hungary to produce battery swap stations for Europe. And the first few stations have already popped up in Norway, Denmark, Germany, and the Netherlands. 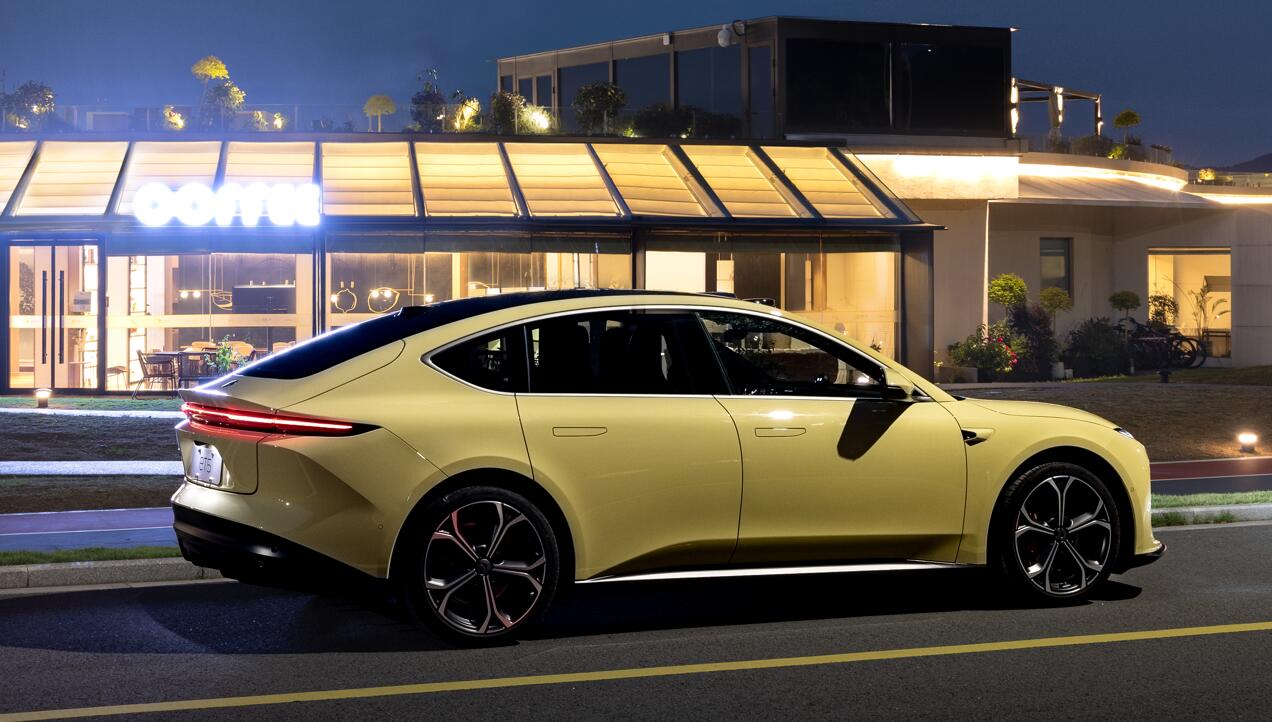 To some degree, the ET5 is a car that sails on its design. It’s sharp, dynamic, athletic, and muscular, in many ways different from all the NIO’s products before. Previously, they are all smooth lines and elegant proportions. But for the entry-level saloon, NIO decided to be more aggressive, and the designers really delivered.

At the front, they really dropped the bonnet line, which gave the front passengers excellent forward visibility. This also has an interesting side effect, we’ll come to that later.

The A pillar is so swapped back, on the positive side it does make the car look sporty, on the negative though, it’d also eaten the head space somewhat. 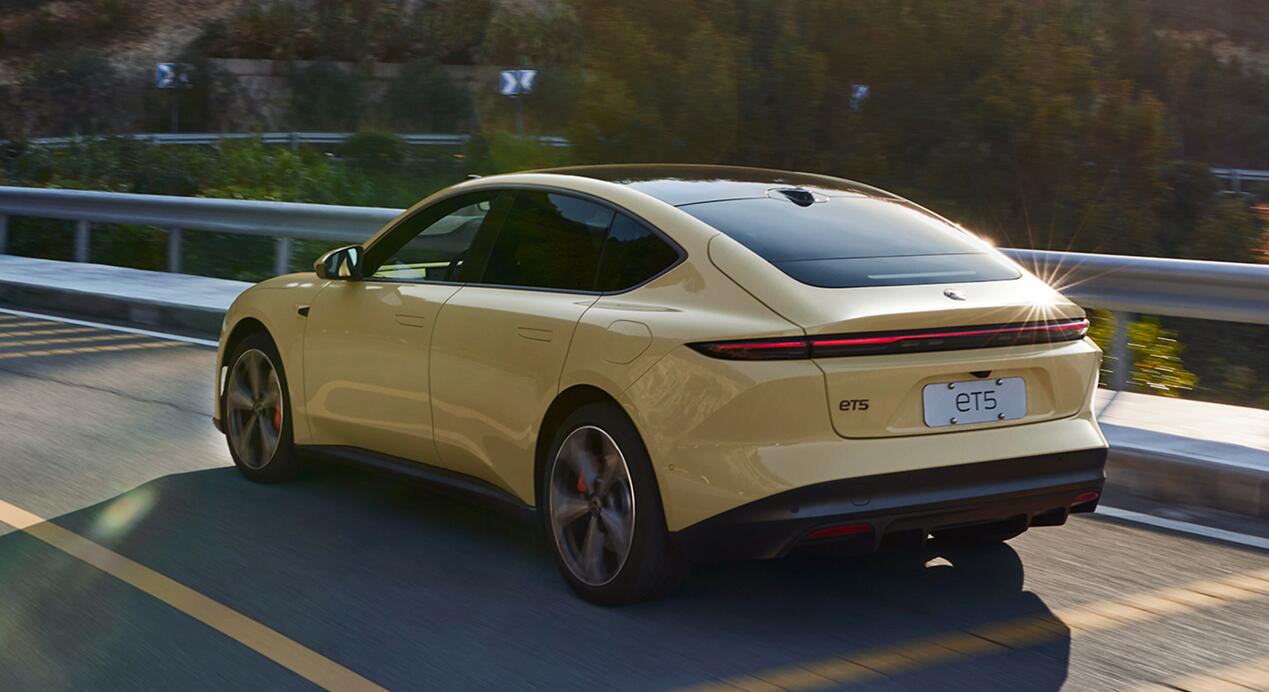 This press car is equipped with the optional 20-inch wheels and Pirelli P-Zero tires, a slight hint into the dynamic capability of the ET5.

The rear end of the ET5 is arguably the best-looking part of the car because the car has a fairly short rear end the aero team really got to work that out of reducing the wake effect of this car. Because usually, the longer the rear end is, the easier to reduce drag. 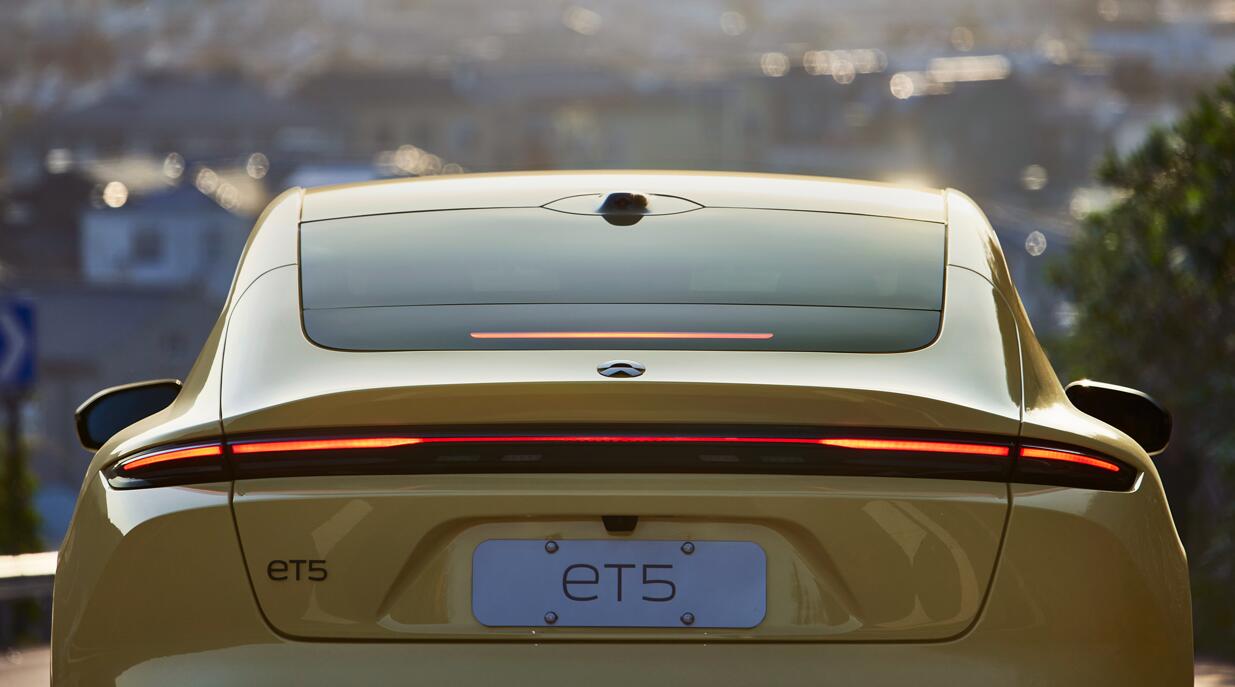 The spoiler and the diffuser on the ET5 are all functional and produce real downforce. They have to be, otherwise, the lift on the rear end would have been quite atrocious. It’s just fortunate that they managed to make these functional elements so good-looking.

These two sharp lines dramatically shrink the volume on the rear end and bring the visual focal point upwards. The boot is made of composite materials because the shape of this complex is just too much for metal stamping and pressing.

So yeah, a lot of people are sold on the ET5 at the first sight. 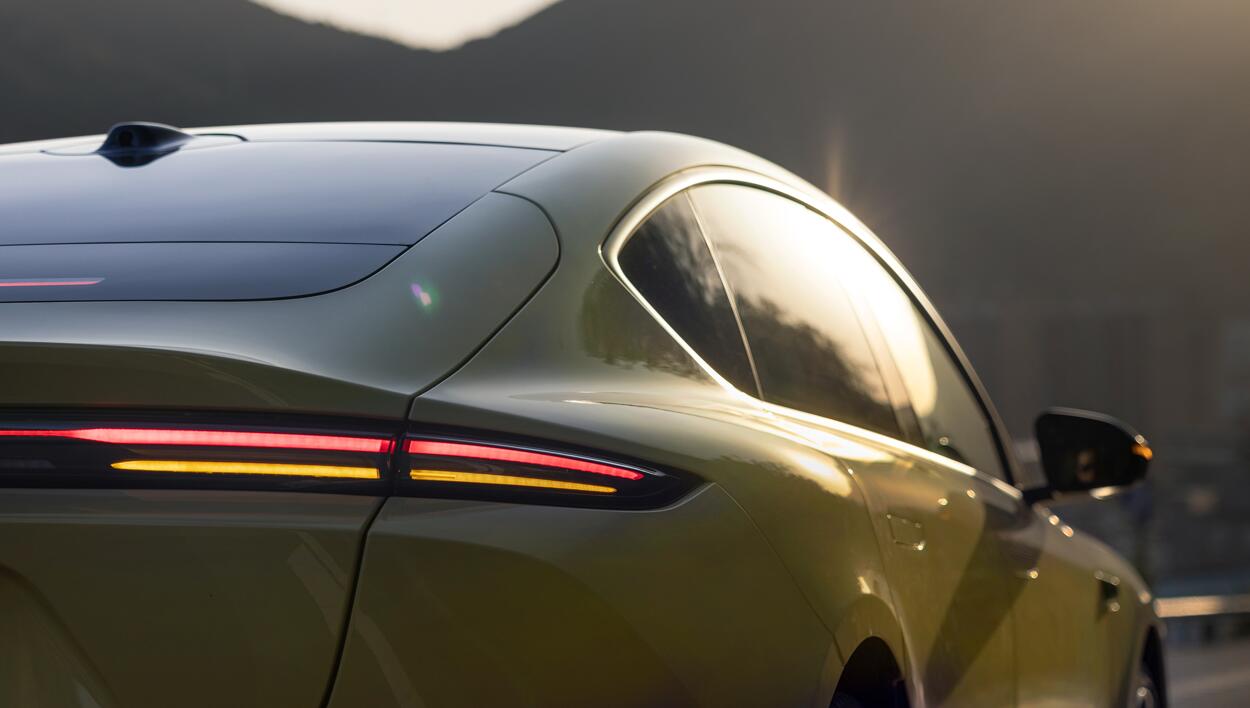 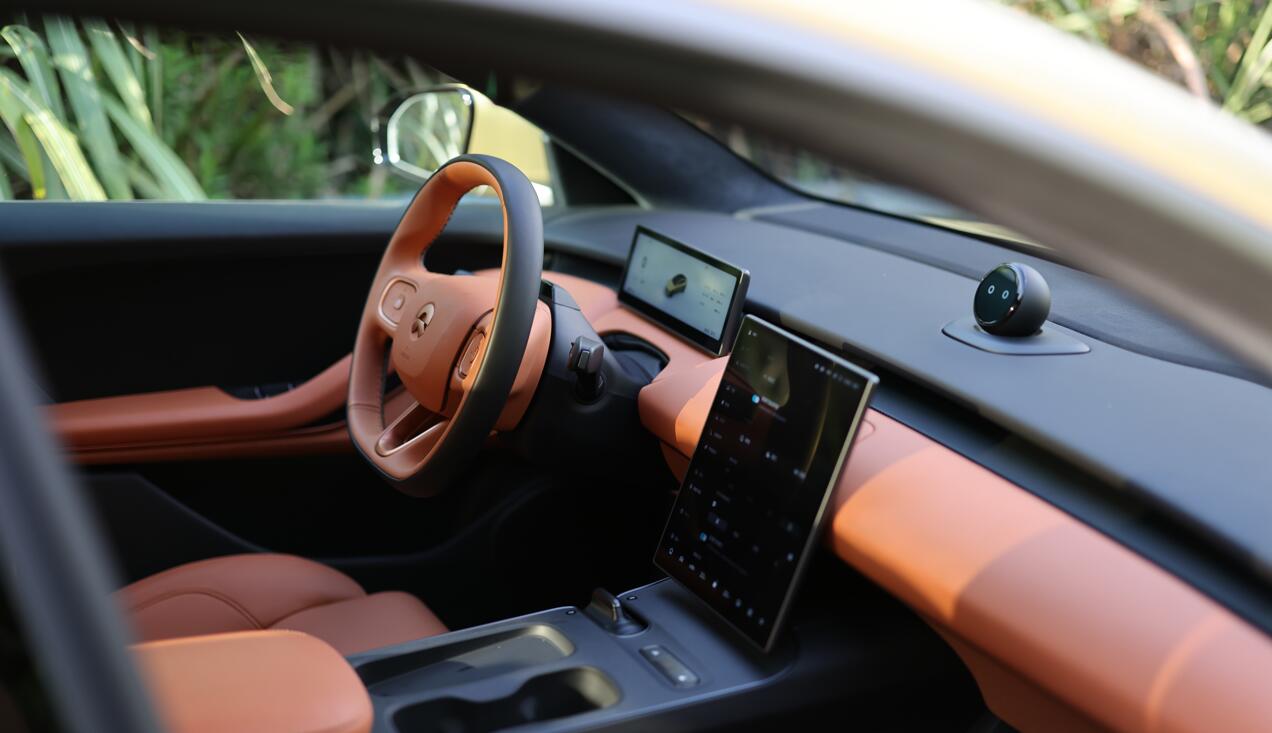 The interior of ET5 is more in line with the rest of the NIO line-up.

The screens are all from the ET7. The backlight of the instrument display is Mini-LED, right up there with the cutting-edge MacBook Pros, and can sustain 1000 nits full-screen brightness. It’s also the reason why it doesn’t have a cover because it’s bright enough all by itself.

The main display is a portrait orientation Super AMOLED screen: very high resolution and powered by Qualcomm 8155 chip, responsive as well. The user interface is highly polished and very customizable.

On materials, you can select the car to be leather-free. The center console and the window switches are all made of recycled composite material. Each ET5 contains about 100 standard PET plastic bottles.

The overall feel of the cabin still feels luxurious and up-market despite not using any fancy materials. In terms of fit and finish, it’s the usual NIO standard. The center console especially reminds me of my ThinkPad. Nobody has thought of them as being cheap.

I said in the beginning that I did the national media test drive of the ET5. A widely shared criticism is that the seating position, especially the front row is too high, it feels like you are sitting on the top of the car. Here is the full story:

Firstly is the battery swap, to be compatible with that system, which we should not forget first showed up on the ES8. That is a 5-meter SUV, and this is a relatively compact saloon. To fit that battery pack into the ET5, something has to give.

I think, and this is purely my personal opinion, to sit 5cm taller and get a battery swap is a complete no-brainer, the benefit far outweighs the sacrifice.

Secondly, the seating position is exaggerated by the low front bonnet line. Because the truth is the ET7 is just as tall as the ET5 and nobody complained. The engineers of the ET5 pushed really hard to lower the Carl Point where the A-pillar and the bonnet connect.

So yes, I am willing to sit a few centimeters taller in exchange for a battery swap. If you disagree because you have not seen the battery swap in action, I completely understand. But when you have, I think you will agree with me.

In terms of space, I am 5’11 and I can sit in the back of my driving position. It is definitely not as big as the ET7 or any of the China-only, extended-wheelbase A4, C Class, and the 3 Series, and it’s not meant to be.

At 4.79 meters, the ET5 is a mid-size saloon, with more focus on dynamic capabilities. And none of the German rivals can match the acceleration of this car at this price point.

The real effort of this car’s interior is spent on the ambient lighting. It is a much more dramatic effect than any of the previous models. The product definition guy says he wants to give the user a car that is relaxing most of the time but can be turned up at any moment. 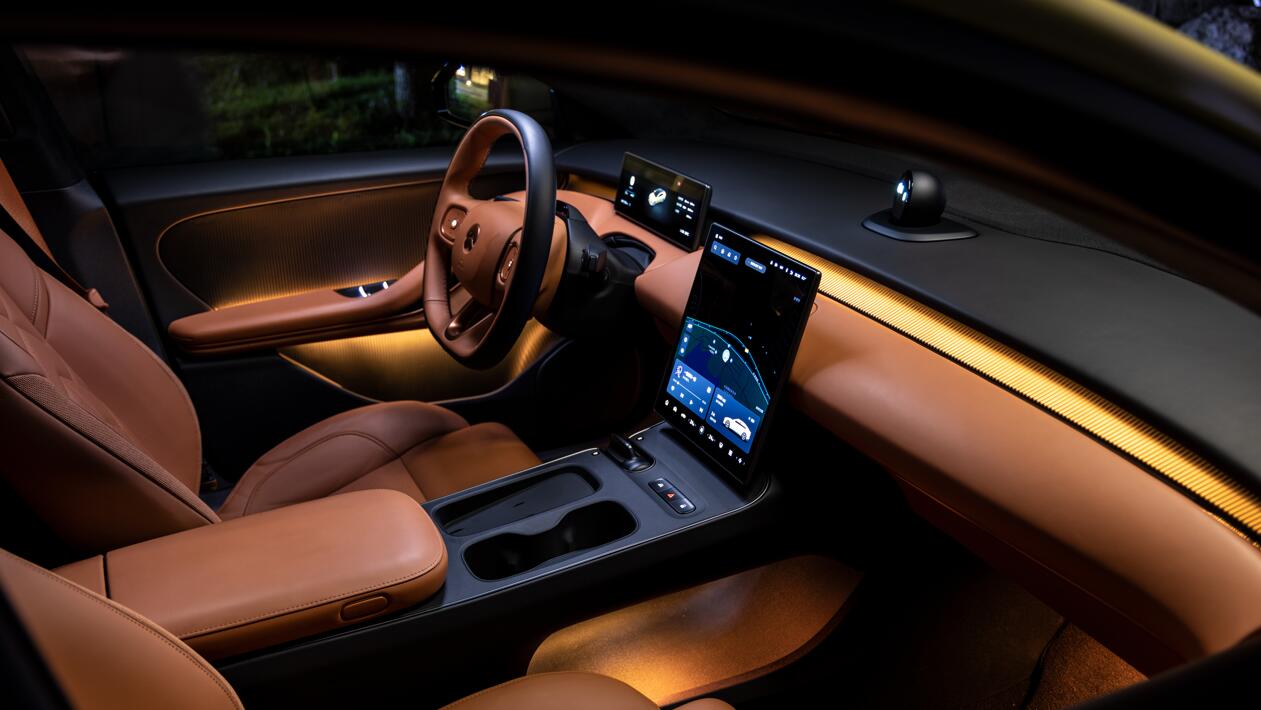 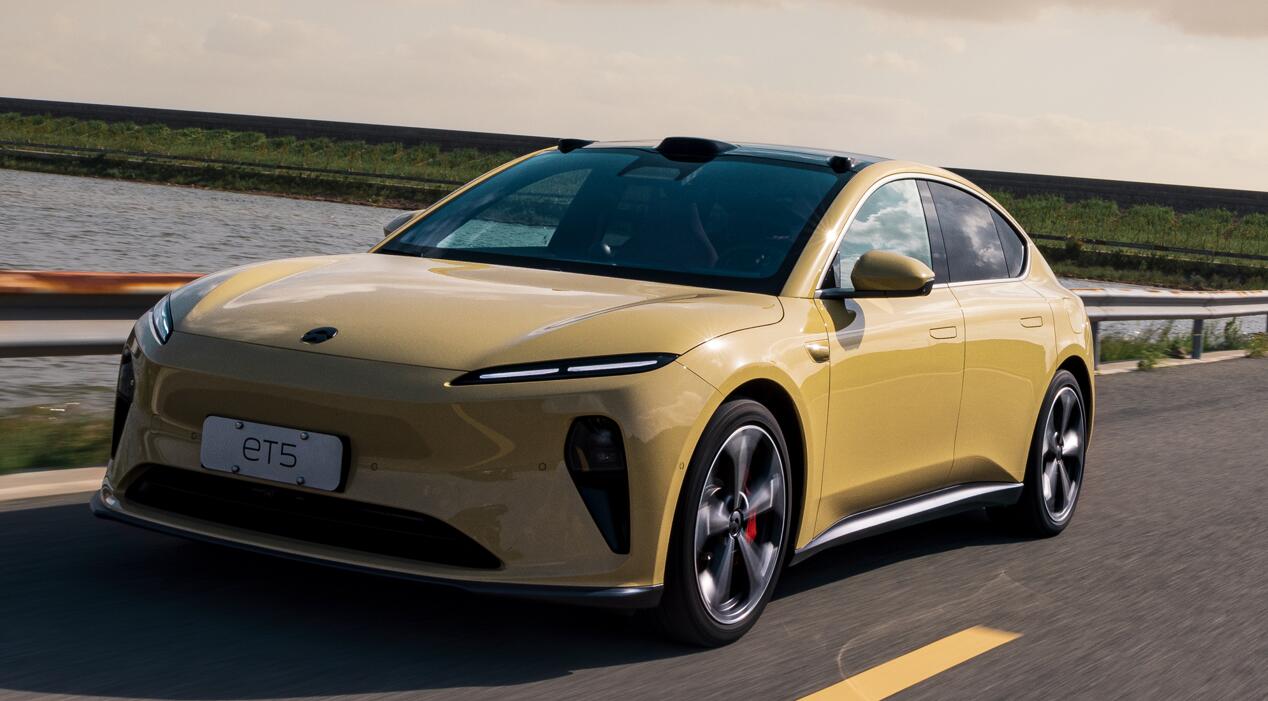 Now we’re on the move, the ET5 like any other NIO model has two motors, 490 horsepower, and 0-100 acceleration done in 4 seconds, claiming, in reality, this is a 3.7 to the 3.8-second car. So the performance, as usual, is more than enough.

The chassis setup of the ET5 is I think where differentiates the most from all of its predecessors. Yes, all of the NIO models have a lot of performance, but you never want to drive them that fast. They are all softly-sprung, laid-back, comfort-biased setups, which I suppose is appropriate for massive SUVs like ES8 or executive saloons like the ET7.

But the ET5, luckily, however, is not any of that. It’s tight, compact, full of road information, body control is excellent to the point even I think it’s confidence-inspiring, that is a word that I have never associated with any NIO cars before. It just encourages you to drive harder and harder.

Meanwhile, the ride quality is nowhere near as punishing as the Tesla Model 3. This is still a very refined luxury saloon.

Another point I find similar to my F-TYPE is that I feel great sitting here knowing how good it must look from the outside. It’s a great-looking car. It’s not just the pleasure of driving it, it’s also the pleasure you give to others. The F-Type can do that is kind of expected, but on a regular family saloon, I never expected that.

In terms of range and efficiency, the ET5 is NIO’s most efficient car. That is also understandable because it’s also the smallest. On a 100KWh battery, the ET5 is rated at 710km CLTC, when you translate that to WLTP, it’s roughly 580km, in EPA terms, that’s roughly 320 miles. On the base model, you get 560km CLTC, that’s roughly 420km WLTP.

But for NIO cars that can battery swap, the range number is actually not that relevant. Let’s put that into the dedicated battery swap video because this review is getting too long.

So it seems up to this point, this is a glowing review for the ET5, and rightly so, I do think it’s a cracking car, but here are my dislikes:

The first dislike is the steering. It’s too slow for a sporty saloon that can do 0-100 within 4 seconds, especially the on-center response. If you put light steering input, the nose barely has any response. I know on the plus side this setup improves the highspeed stability, but it just makes this otherwise very dynamic car feels a bit numb when you are changing lanes on the highway.

The second dislike is the rear visibility. It’s so poor to the point that I will not compare this to any of the regular cars. To put into context, the rear visibility of the ET5 is even worse than the Jaguar F-Type, which is a two-seater sports car.

As I said before, this car is very dynamic if you drive within seven-tenth of the car’s capabilities. Once you go beyond that, and you’re right at the limit and you’re expecting some fun from the rear axle, it doesn’t have that. But I suppose not that many drivers will experience that in daily driving. However, as a 490hp car, I think you should be informed.

There are many aspects of the ET5 that I have not even touched on. For example, this particular car has a BETA version of the latest autonomous driving software. I cannot tell you what it is, because it is not released yet.

There’s also the augmented-reality glass, the Dolby Atmos sound system, and the NIO phone APP that has been copied by so many others.

You get the idea, even if you strip all those features away, and treat ET5 as a normal car, it is still a very compelling proposition.

NIO’s cofounder Qin Lihong said at the Chengdu Auto Show that the target is to outsell the BMW 3 Series in China.

To be honest, when we decided to say that, we were expecting a fair bit of public backlash, saying that we are too ambitious and that it will never happen, how dare you compare yourself to the lines of BMW.

However, the response after the event was like” Yeah, that was about right.” So it turned out we were not bold enough with the statement. That gives you an idea about the public expectation of the ET5, hopefully, this will open the floodgate for NIO and ET5 will head to Europe. See you there next year.