Should PHEVs use chargers along highways during peak seasons? Chinese Internet users debate 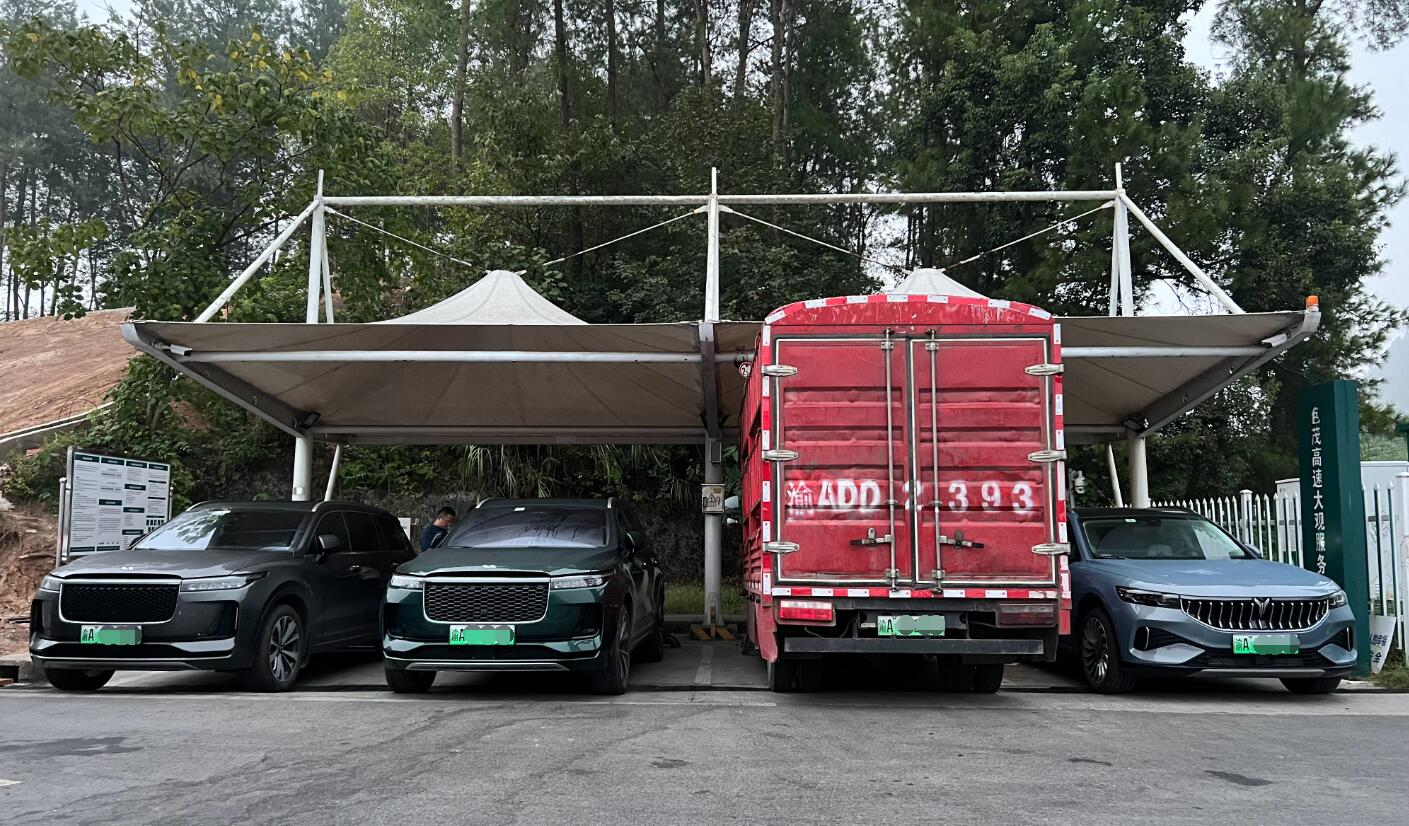 For plug-in hybrids (PHEVs), especially extended-range electric vehicles (EREVs), one of the automakers' marketing selling points is that owners can use battery power for short distances and gasoline for long trips.

So what if owners of these vehicles want to use the same lower-cost electricity for long trips, especially on holidays?

As new energy vehicles (NEVs), including PHEVs, are increasingly sold in China, this problem is starting to become more apparent during holidays, such as the recent Chinese National Day, which was from October 1-7.

Weibo user @廖小肥 said on October 5 that he was passing through a highway service area when he saw that three of the four charging piles at a charging station were occupied by models with extended-range technology.

The blogger shared pictures showing the three vehicles, including two Li Auto's Li ONEs and a Voyah Free.

The Li ONE, the first model from Li Auto, is powered by a 40.5 kWh battery pack and has a battery range of 188 km under NEDC.

The Voyah Free is the first model from Voyah, but unlike the Li ONE, it is available in both EVEV as well as all-electric versions, with the former having a 33 kWh battery pack and a battery range of 140 km.

Charging resources are scarce in highway service areas during the holiday season, so please, EREV owners, represented by Li Auto owners, should not compete with owners of pure electric models for charging piles at this time, the blogger wrote.

"Isn't it true that EREVs can use electricity in urban areas and refuel on long trips, so there's no range anxiety? But once they get to the highway service area, some owners are honestly thinking about their wallets," the blogger complained.

In the comments section of the Weibo post, there is both a lot of support for the blogger's views and a lot of opposition.

To date, the blogger's Weibo post has received 265 retweets and nearly 4,000 likes.

The Weibo post has received comments from many famous car bloggers, such as Han Lu, who has 6.46 million followers, who said on October 11 that reasonably speaking, every car owner has the same rights, and no one has the right to interfere with these EREV owners if they choose to charge.

However, emotionally speaking, charging resources in service areas on main roads are tight during holidays, the blogger said, calling for owners whose vehicles can be refueled to try to make charging resources available to owners of pure electric vehicles.

NIO vice president Shen Fei also joined the discussion and retweeted Han's comments yesterday evening, saying that as long as a vehicle can be charged, then it has the right to do so.

"But I also understand why some pure electric vehicle owners have complaints; they don't naturally dislike EREV owners, but because the vast majority of EREVs have exceptionally low charging power, and (people waiting in line) get anxious on the sidelines," Shen said. 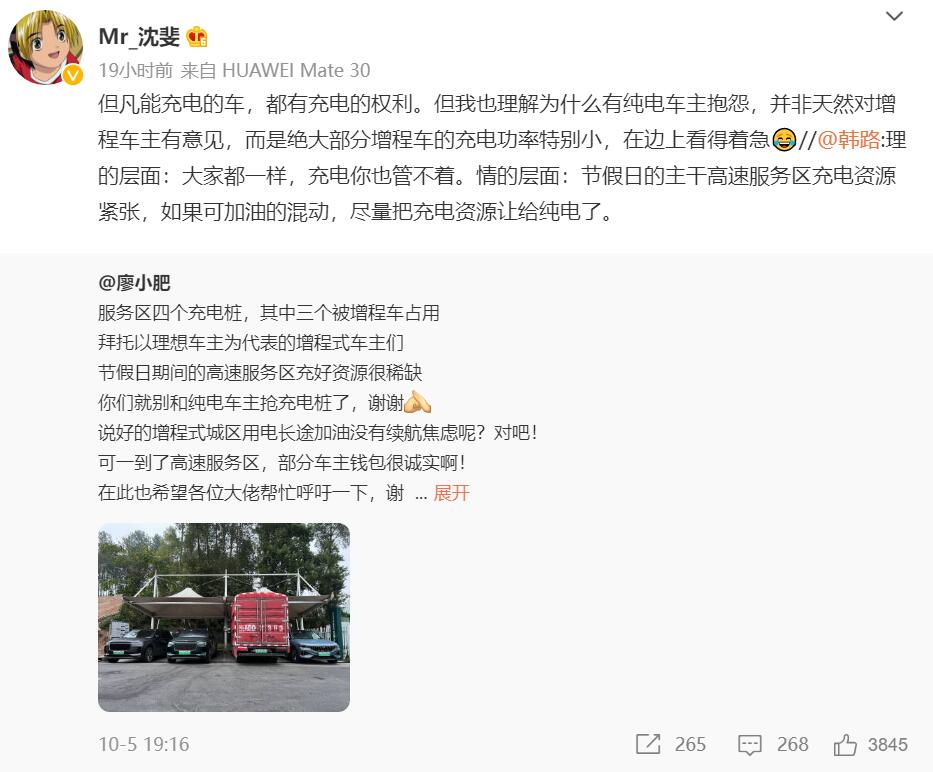 China's NEV sales have continued to reach record highs in the past few months, and overall, 0-emissions pure electric vehicles are contributing the majority of sales.

Wholesale sales of new energy passenger vehicles in China reached a record 675,000 units in September, the second consecutive month of more than 600,000 units, according to data released by the China Passenger Car Association on October 11. 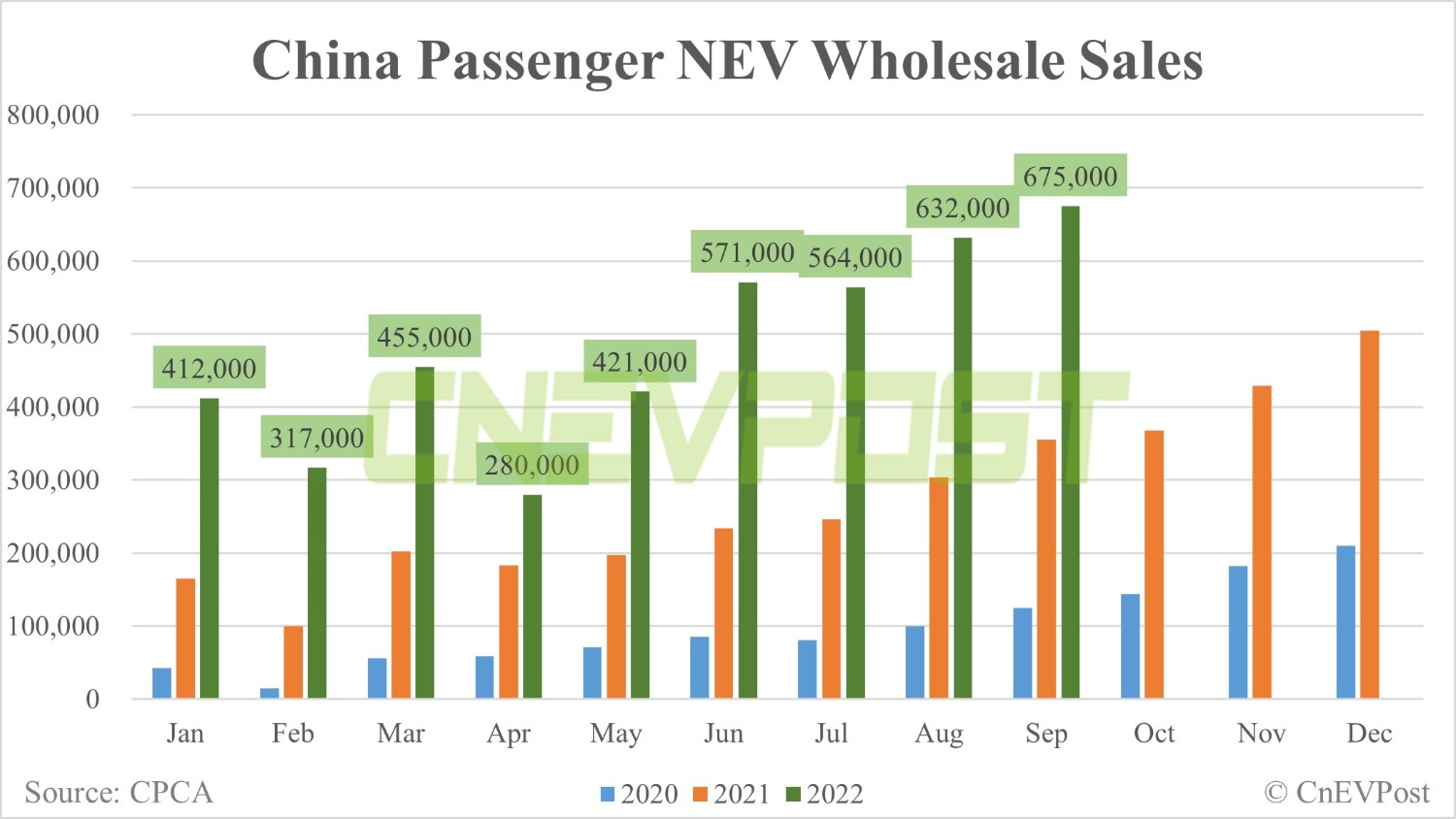 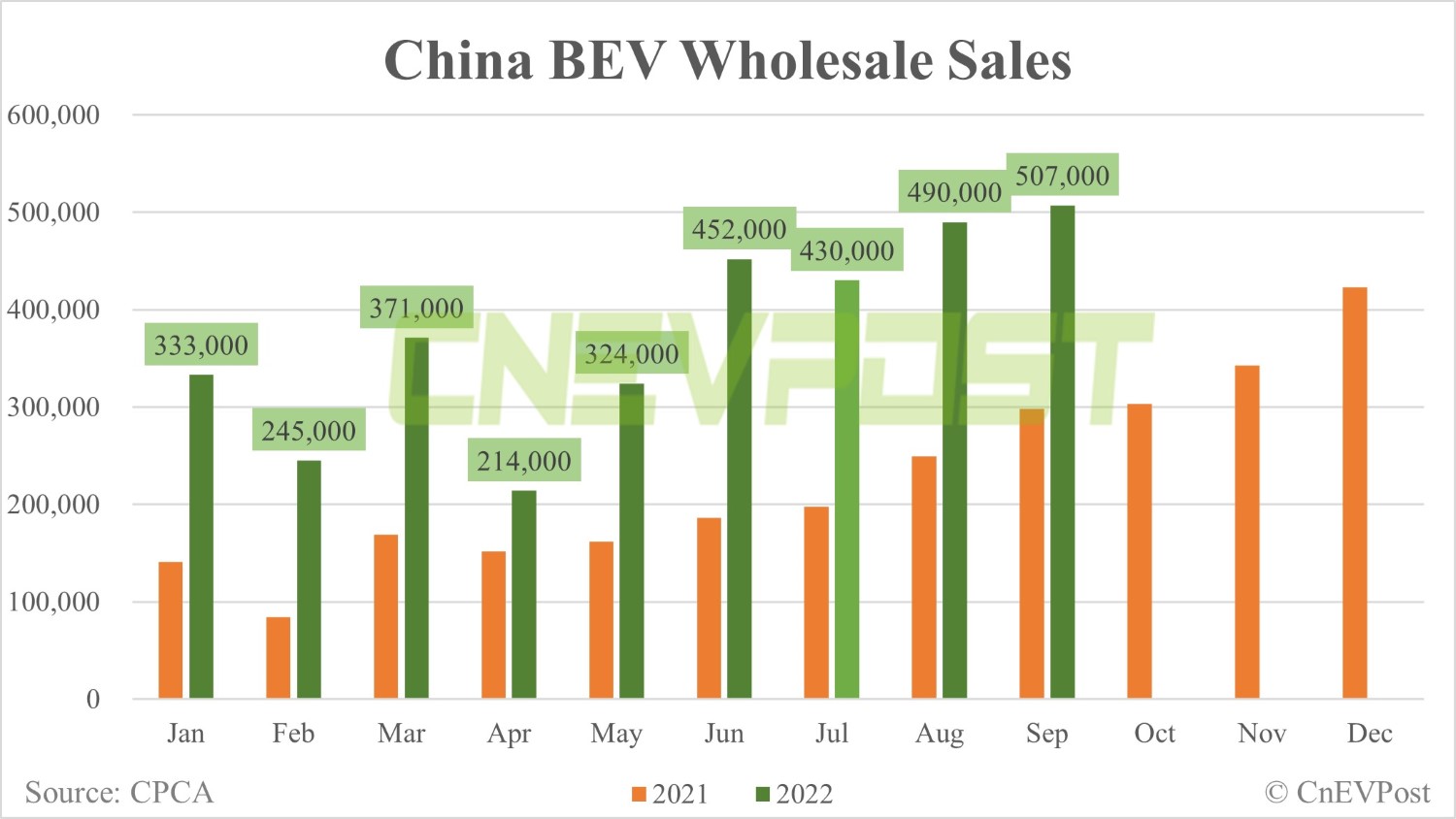 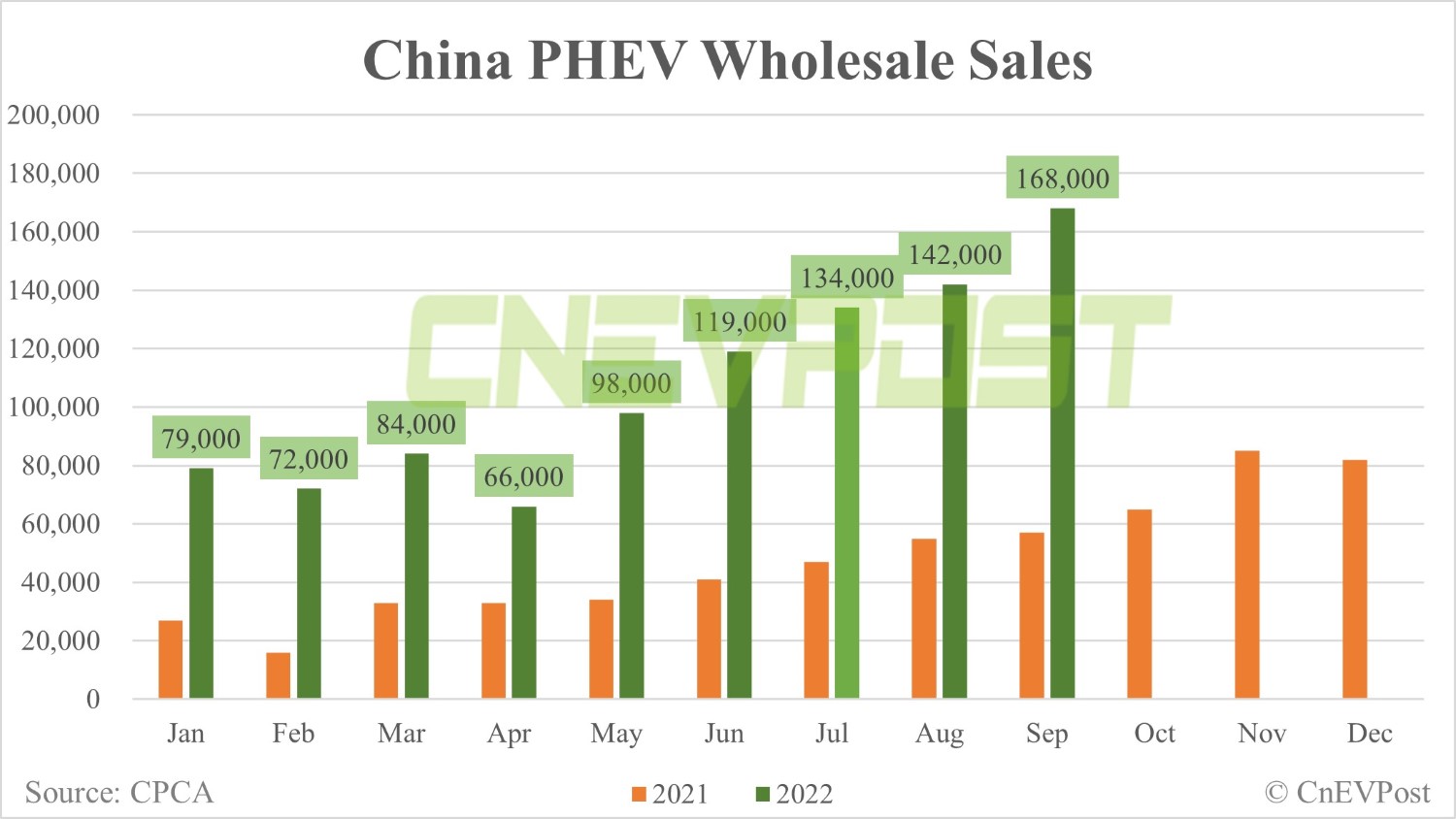