At press time, CATL was down 8.64 percent on volume that hit a single-day high since its 2018 IPO in less than half a trading day.

Shares of Contemporary Amperex Technology Co Ltd (CATL, SHE: 300750) traded in Shenzhen plunged in early trading today after the company reported weaker-than-expected earnings ahead of the Chinese Labor Day holiday.

At press time, CATL was down 8.64 percent to RMB 374 on volume of RMB 15.5 billion in less than half a trading session, a new single-day high since its June 11, 2018 initial public offering.

Earlier today, the stock was down nearly 14 percent at one point. It has a one-day limit of 20 percent for upside and downside. 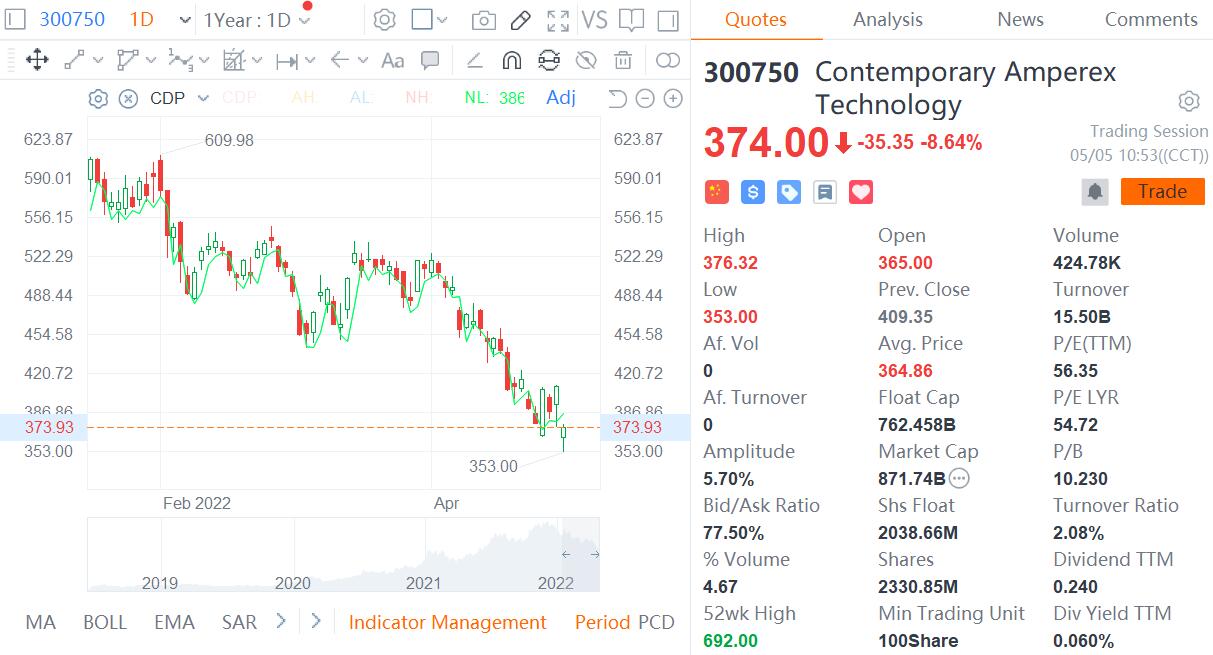 CATL reported revenue of RMB 48.68 billion in the first quarter, up 154 percent year-on-year and 15 percent lower than in the fourth quarter of last year, according to its first-quarter earnings report, which was released on April 29.

The A-share market was closed for trading during the Labor Day holiday, which runs from April 30 to May 4 this year.

CATL's net profit attributable to shareholders of listed companies in the first quarter was RMB 1.49 billion, down 24 percent year-on-year and 82 percent lower than the fourth quarter of last year. This was well below previous market expectations of around RMB 5 billion.

Higher than expected raw material prices, including lithium carbonate, and the company's relative caution in passing on cost pressures to customers, as well as a seasonal drop in sales in the first quarter, contributed to the change in profit, CATL said in an investor conference.

Raw material prices, including lithium carbonate, remained high in March and April, which had an impact on costs in the second quarter, CATL said.

However, the company is making good progress in negotiating price adjustments with customers, and gross margins will gradually recover reasonably, the company said.

CATL also addressed the impact of the Covid outbreak, saying that there was a recent case of Covid in Ningde, Fujian province, where its headquarters and main production base are located, but the local government responded quickly and local travel restrictions were largely lifted before the Labor Day holiday.

The Covid outbreak in other regions, including Shanghai, led to production cuts at some vehicle companies, but they have now gradually resumed production and the company faces limited overall impact, CATL said, adding that its capacity is expected to meet customer demand this year.