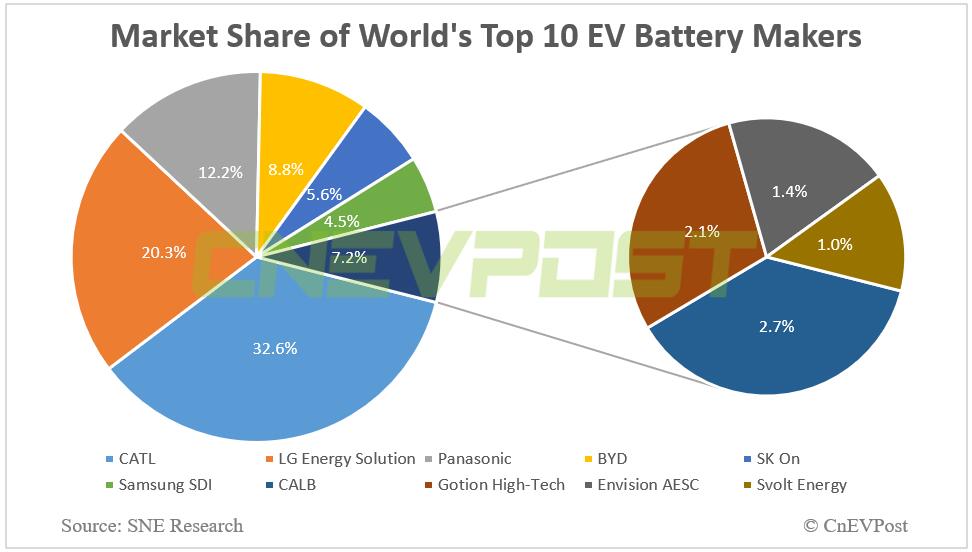 China's Contemporary Amperex Technology Co Ltd (CATL) continues to be the world's largest power battery maker in 2021, the fifth consecutive year it has held the position, the latest figures show.

CATL's installed power battery capacity was 96.7 GWh in 2021, up 167.13 percent from 36.2 GWh in 2020, according to data released Monday by South Korea-based market research firm SNE Research.

This gives CATL (SHE: 300750) a global market share of 32.6 percent, up 8 percentage points from 24.6 percent in 2020, and is the fifth consecutive year in the position of the world's largest power battery maker.

However, in LG Energy Solution's view, it has the potential to take CATL's place in the future.

Given a significantly higher order backlog and other factors, LG Energy Solution could overtake CATL in the global electric vehicle battery market, the company's CEO Kwon Young-soo, said on January 10.

Kwon made the remarks in an online press release about the company's upcoming IPO, emphasizing LG Energy Solution's dominance in terms of intellectual property and the diversity of its foreign customer base.

"We overwhelm the competitor in IPs, and we have more diverse clients in the US and Europe, and production bases there to supply our products to those clients, which CATL doesn't have," Kwon said.

Japan's Panasonic ranks third in the global power battery market, with a 12.2 percent share, according to SNE Research.