An XPeng source has hinted that the report is true, saying that the supply chain of components for vehicle production needs to be continually improved.

XPeng Motors plans to bring in local CALB as its new main battery supplier in addition to Contemporary Amperex Technology Co Ltd (CATL), according to a 36kr report on Thursday.

Cls.cn on Friday cited an unnamed XPeng source as suggesting the report is true, saying the supply chain of components for vehicle production needs to be continually improved to better ensure supply and yield, and to more accurately predict delivery cycles.

XPeng's main battery supplier is currently CATL (SHE: 300750), and 36kr reported that XPeng's chairman and CEO He Xiaopeng and CATL founder and chairman Robin Zeng had a mid-year meeting spat, with Zeng even walking out of the meeting at the height of the argument to calm down for more than 10 minutes.

The argument was over He's plan to bring in CALB as the new main battery supplier, which would cut into CATL's share of supply. CALB, on the other hand, is seen by CATL as a serious threat to its nemesis.

The news portal Sina quoted a CATL source as saying the spat was completely false, offering no further details.

Data released earlier this month by the China Automotive Battery Innovation Alliance showed that CATL had 11.45 GWh of power batteries installed in China in November, giving it a 55 percent market share, up 5.1 percentage points from 49.9 percent in October.

CALB ranked third with 1.09 GWh and a 5.2 percent market share, up from 5.0 percent in October, moving it up one spot from October. 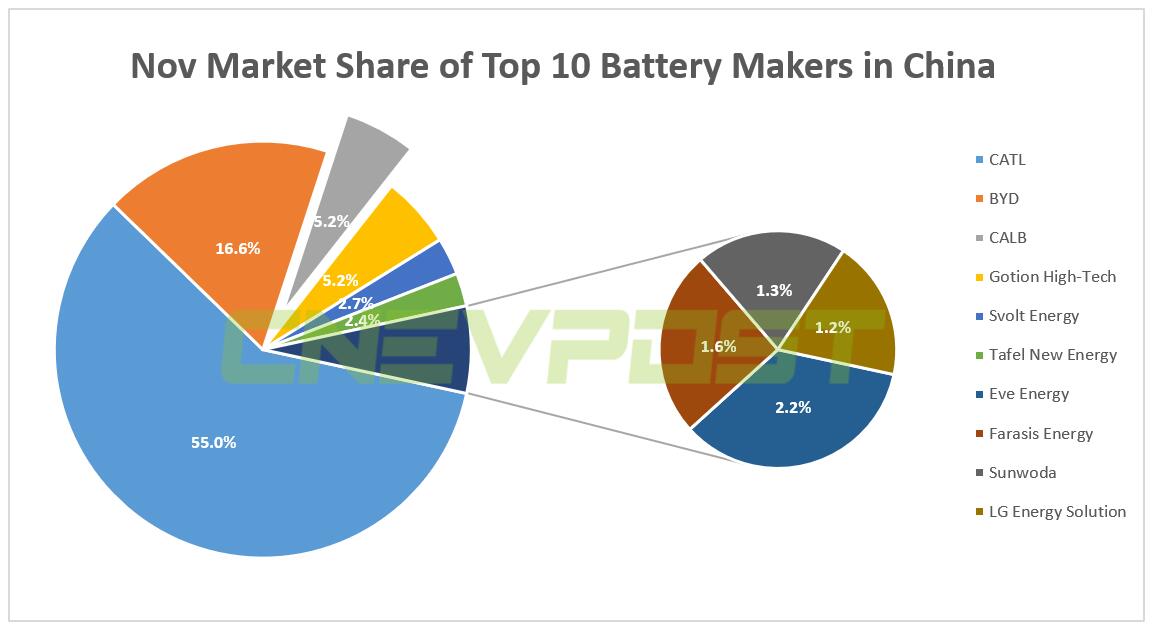 According to 36kr, almost all Chinese car companies are CATL customers, but CALB's rapid rise this year is posing a potential threat to CATL's dominance.

CATL has replaced CATL as the No. 1 supplier to GAC's new energy vehicle business, and a GAC source said that starting in May 2020, not a single CATL battery has been used in GAC's NEV models, according to 36kr.

GAC and XPeng are both leading companies in China's NEV industry, and the latter in particular is gaining momentum, having delivered more than 10,000 for three consecutive months since September, the report noted.

Both companies have joined forces with CALB, making CATL aware that its leadership position is being challenged, the report said.

Notably, CATL has previously begun to take action against potential threats from CALB.

On July 21, CATL announced that it had formally sued CALB for patent infringement, claiming that CALB's allegedly infringing batteries are in tens of thousands of vehicles.