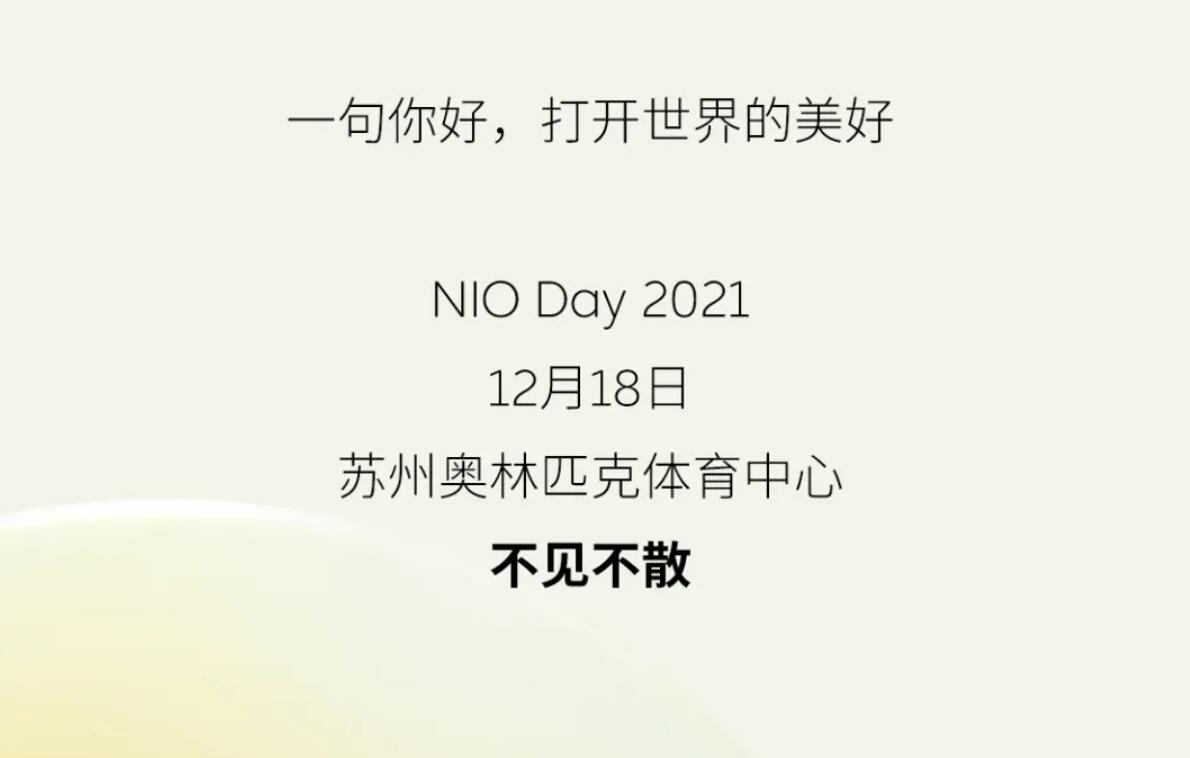 Due to the recent sporadic Covid-19 cases, many people were concerned whether the upcoming NIO Day 2021 would be held as planned. Now NIO has given their confirmation and is starting to allow user registrations.

"The impact of the outbreak has made preparations and approvals a little more cautious and time-consuming this year," the NIO said in a statement posted on its app.

"However, today we can finally be happy to tell you that this year's NIO Day will be held on December 18, so let's meet at the Suzhou Olympic Sports Center," the statement said.

The theme of this year's NIO Day is "Hello World," compared to last year's "Always Forward."

The schedule released by NIO shows that the event will start at 7 pm Beijing time on December 18 and last until 8:30 pm.

NIO also announced that it is accepting applications for users to participate in the event until 12:00 noon on December 10.

All NIO App users can participate in the registration, and each user can subscribe up to 2 tickets and needs to pay 1000 NIO Credits for each ticket in advance.

Participants will need to have a negative nucleic acid test report within 48 hours of the event and will need to wear a mask throughout the event, according to NIO.

Due to the limited number of seats available at NIO Day, NIO will screen those who are able to obtain tickets at 7:00 pm on December 10.

NIO Points will be calculated until 12:00 noon on December 10.

For those who are not selected, NIO Credits will be returned within 24 hours.

NIO is using electronic tickets for NIO Day for the first time this year, and users who have received tickets can view them in the NIO App.

If users are not able to travel to the site, they can also attend different regional sessions, and applications will open on December 11, according to NIO.

NIO announced on October 18 that NIO Day 2021 will be held on December 18 this year at the Olympic Sports Center in Suzhou, Jiangsu province, a city located about 100 kilometers west of Shanghai.

NIO is expected to release a model including one called the ET5 at that time, as well as another unknown model. The company's previously mentioned brand for the mass market is also expected to be announced at that time.

But the recent appearance of sporadic Covid-19 cases in Shanghai, Jiangsu and Zhejiang had led many to question whether NIO would still hold the event in Suzhou as planned.

Last week, the NIO Day Organizing Committee said that NIO Day 2021 is being prepared in an orderly manner, and that the company is continuing to pay attention to the epidemic control regulations in Suzhou and will actively respond to the national call for strengthening epidemic prevention and management.