Wholesale sales of passenger NEVs in China from January to October were 2,381,000 units, up 204.3 percent year-on-year. 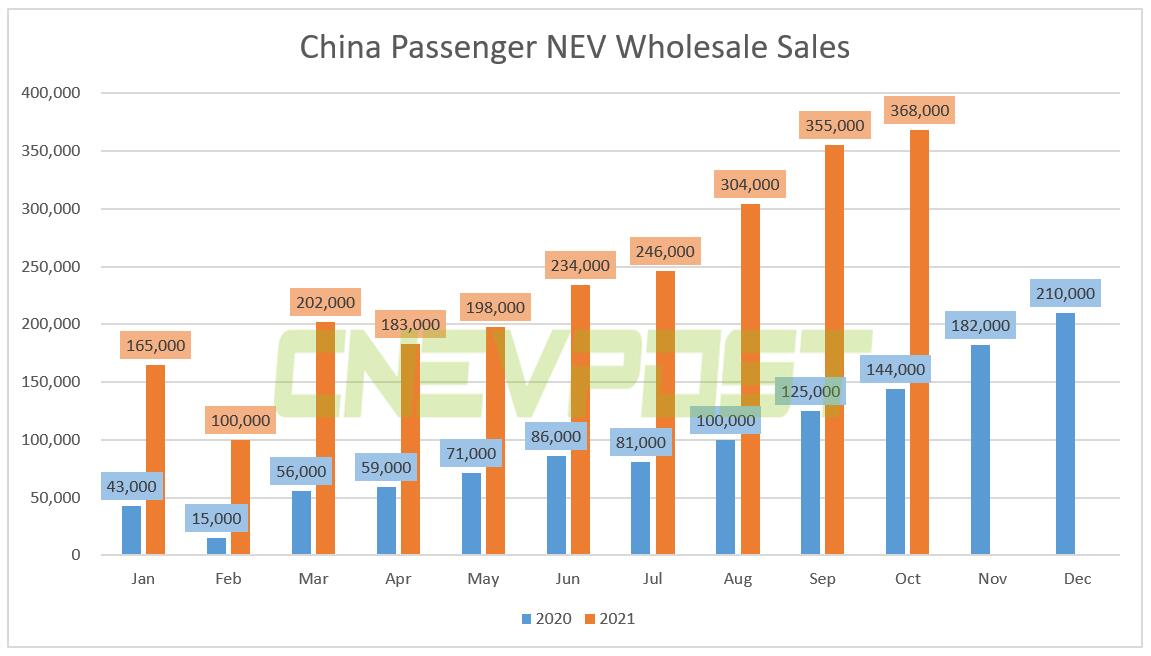 China's wholesale sales of new energy passenger vehicles (passenger NEVs) were 368,000 in October, up 148.1 percent year-on-year and up 6.3 percent from September, according to data released today by the China Passenger Car Association (CPCA).

Wholesale sales of passenger NEVs in China from January to October were 2,381,000 units, up 204.3 percent year-on-year, the data showed.

Retail sales of passenger NEVs in China reached 321,000 units in October, up 141.1 percent year-on-year and down 3.9 percent from September.

In October, the penetration rate of NEVs was 30 percent among local brands and 25 percent for luxury vehicles, compared to only 2.7 percent for mainstream joint venture brands.

Wholesale sales of A00-class EVs in October were 94,000, accounting for 31 percent of pure EV sales.

Wholesale sales of A0-class EVs were 51,000, accounting for 17 percent of pure EV sales.

The penetration of NEVs in China was 18.8 percent of retail sales in October, compared to 13 percent in January-October, up from 5.8 percent in 2020.

BYD PHEV sales were 38,641 units in October, up 17 percent from September, driving the growth of affordable plug-in hybrid models as a new highlight, the CPCA said.

VW's joint ventures in China sold 16,318 NEVs at retail in October, accounting for 72 percent of the mainstream joint venture's share.

BMW's retail sales of NEVs in October were 4,283 units, the CPCA said.

The darkest moment for automotive chip supply has passed in the third quarter, the CPCA said.

But the CPCA also noted that chip supply improved by only 10 percent in October compared with September, below their previous expectation of 20 percent, meaning that the bottleneck of opaque supply remains.

There were 22 working days in November, flat relative to last November and five more than in October this year, favoring the growth of production and sales of car companies, the CPCA said.