From January to October, WM Motor delivered a total of 34,068 units, up 101.7 percent year-over-year, the company said.

WM Motor, one of China's highest-profile electric vehicle startups, posted record sales of 5,025 units in October, up 67 percent year-on-year and essentially flat from the 5,005 units it sold in September.

The company said its sales in October were a record high for a single month, even though it has only released sales figures for June, September and October so far this year. 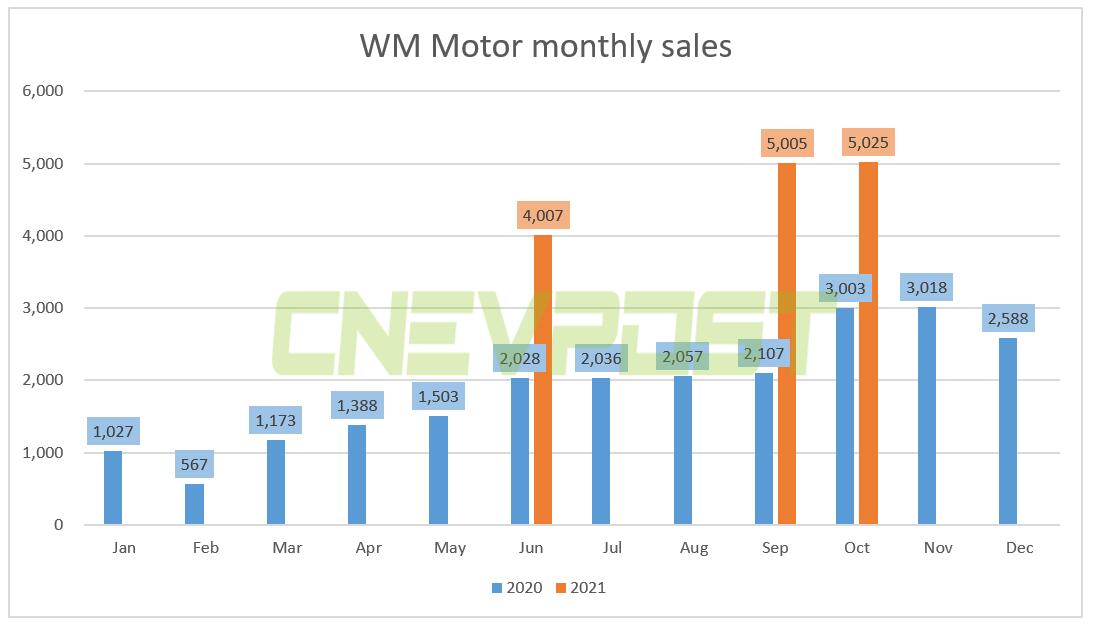 From January to October, WM Motor delivered a total of 34,068 units, up 101.7 percent from a year earlier, the company said.

Since the first vehicle deliveries began in September 2018, WM Motor has delivered a total of 78,597 electric vehicles, it said.

WM Motor's cumulative deliveries exceeded 78,000 units, which shows that customers are accepting and enjoying the convenience of smart mobility, and that they recognize WM Motor's "technology for all" concept, he said.

As one of China's most talked-about new car makers, WM Motor has been questioned for lagging behind its peers this year because it stopped releasing sales figures.

In July, Shen broke his silence and said the company sold 4,007 units in June, a 97.6 percent increase from the previous year.

On October 2, the company announced the highly anticipated M7, its first sedan, which presents a controversial look while offering superb hardware features.

In terms of hardware specifications, the M7 is equipped with the top hardware currently available, including most notably three LiDARs, making it the first vehicle announced by a car manufacturer so far to be equipped with three of those components.

WM Motor says the M7 will be delivered in production in 2022, and no pricing information for the model was announced.