Xiaomi, which announced in March that it was joining the car-making bandwagon, disclosed a patent on Friday for car door control, according to data provider Qichacha.

The method can determine the road conditions near a car door to determine whether that environment is suitable for the door to open, thus preventing injury to people or vehicles, the patent abstract says. 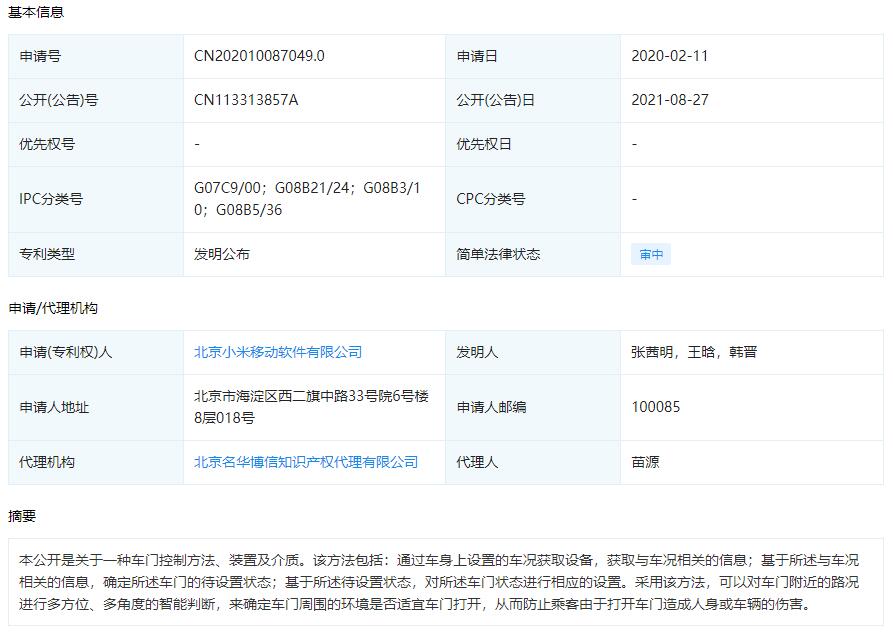 Xiaomi announced its entry into the smart electric vehicle market on March 30 and has since made a series of investments in the sector.

Alpark, an NIO-backed smart parking platform, announced on Monday that it had received a strategic investment from Xiaomi.

The Chinese smartphone giant announced on August 25 that it had acquired DeepMotion, a self-driving technology company, for a consideration of about $77.37 million.

Xiaomi's acquisition of DeepMotion aims to shorten the time it takes to bring its self-driving cars to market, Wang Xiang, the company's president and CFO, said in a conference call after Xiaomi announced its second-quarter results.

"This team is very good, and with our own AI technology accumulation, I think this acquisition will fuel Xiaomi's progress in smart cars, especially in the area of smart driving technology," Wang said.

Xiaomi has already started in-depth research and development of the most important core technologies for smart electric vehicles since it announced its entry into the smart car space a few months ago, he said.

"Driverless technology is actually at the heart of smart electric vehicles. We are determined to be deeply involved and hope to shorten the time to market for our self-driving cars with this acquisition," Wang said.