Wuling claims over 3,000 orders for KiWi EV in first week of pre-sale 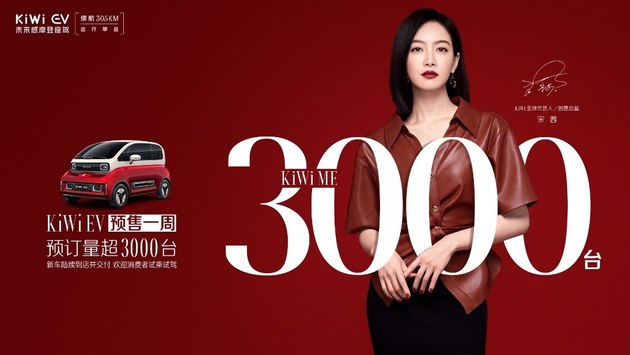 SAIC-GM-Wuling said on August 18 that orders for its Baojun KiWi EV exceeded 3,000 units within a week of the start of pre-sale.

The KiWi EV is powered by an electric motor with a total power of 40kW and a maximum torque of 150N⋅m.

It is powered by a 31.9kWh lithium iron phosphate battery with an NEDC range of 305km and takes 1 hour to charge from 30 percent to 80 percent using DC fast charging.

Wuling said the KiWi EV's potential owners will be mostly young women living in urban areas, and the company has set up a variety of themed scenarios at the car's delivery site to cater to customer preferences.

Previously, it was reported that NIO would create a new brand to enter the mass market and that the market where the Mini EV is located was under consideration.

But William Li, founder, chairman and CEO of NIO, said on NIO's Q2 conference call last Thursday that while the new brand is aimed at the mass market, the company will not enter the Mini EV market either.

Li said the relationship between the NIO brand and the new brand is similar to that between Lexus and Toyota, and Audi and Volkswagen.

Li praised the KiWi EV as a smart car that is globally original, technological and futuristic, according to an article released by Wuling.

"For NIO owners, the second car in the family should be something like the KiWi EV, stylish, young and fun," Li was quoted as saying in the article.

KiWi EV goes on pre- sale, priced twice as much as Mini EV

Join our Telegram group to be alerted the moment we publish an article: t.me/CnEVPost
#KiWi EV#Wuling
0
Comments (0)