In its initial coverage of Uxin on Thursday, TF Securities analyst Wu Li's team saw the company as a rising Chinese version of "Carvana" and gave it a "buy" rating and a $6.38 price target.

Uxin was founded in 2011 and went public on Nasdaq in June 2018. Its businesses include used car trading, auto finance, logistics and transportation, after-sales support and maintenance.

"As a leading player in the used car market, Uxin has long attracted a variety of investors. 2021 saw the company receive another investment from NIO Capital," the report said.

On June 15, 2021, Uxin announced that it had formally signed financing agreements with NIO Capital and Joy Capital for a potential total of $315 million.

William Li, chairman of NIO and partner at NIO Capital, said at the time that the used car market in China has the potential for exponential growth and believes Uxin will continue to lead the way and help the industry reach new heights of quality and reliability.

TF Securities believes that Uxin is valued by NIO Capital for its leading position in the online used car market.

The investment in Uxin will further improve NIO's position in the car trading scenario, and together with NIO Capital, it will bridge the company's possibilities for cooperation with NIO, bringing more imagination to Uxin's development, the report said.

Wu's team believes that China's current car market is similar to that of the US in the 1980s, and that used car development is likely to follow the same trend.

"There is still room of 4-6 times to increase the ratio of used cars to new car sales in China, and there is plenty of room for upstream service providers to consolidate. But their growth potential is being suppressed by the industry's woes, and the system needs to be improved," the report reads, adding that "the development of the used car industry has received increasing attention at the national level in recent years. Since 2020, a number of favorable policies have been accelerated, and the used car industry is on the fast track of development."

Uxin's business model, similar to that of Carvana in the US, is expected to give it a similar path to growth in China, the team said.

Carvana is the leading e-commerce trading platform for used cars in the US, providing customers with a convenient experience for buying and selling used cars.

Wu's team says consumers can now use the Uxin App to select, receive and service their cars online in a "one-stop" transaction. This is based on the company's expertise, as well as cutting-edge technologies such as VR and artificial intelligence.

TF Securities said Uxin is fully transformed into a new business model with online transactions and its own inventory, and has improved key metrics for two consecutive quarters, amid rapid growth in demand for used cars in China and accelerated implementation of favorable policies. "The company is poised to become the Chinese version of Carvana," the report said.

The company went public on the New York Stock Exchange in 2017, and its shares have risen more than fivefold in the last three years since the IPO, with a market capitalization of nearly $50 billion.

Uxin has risen 327 percent so far this year. 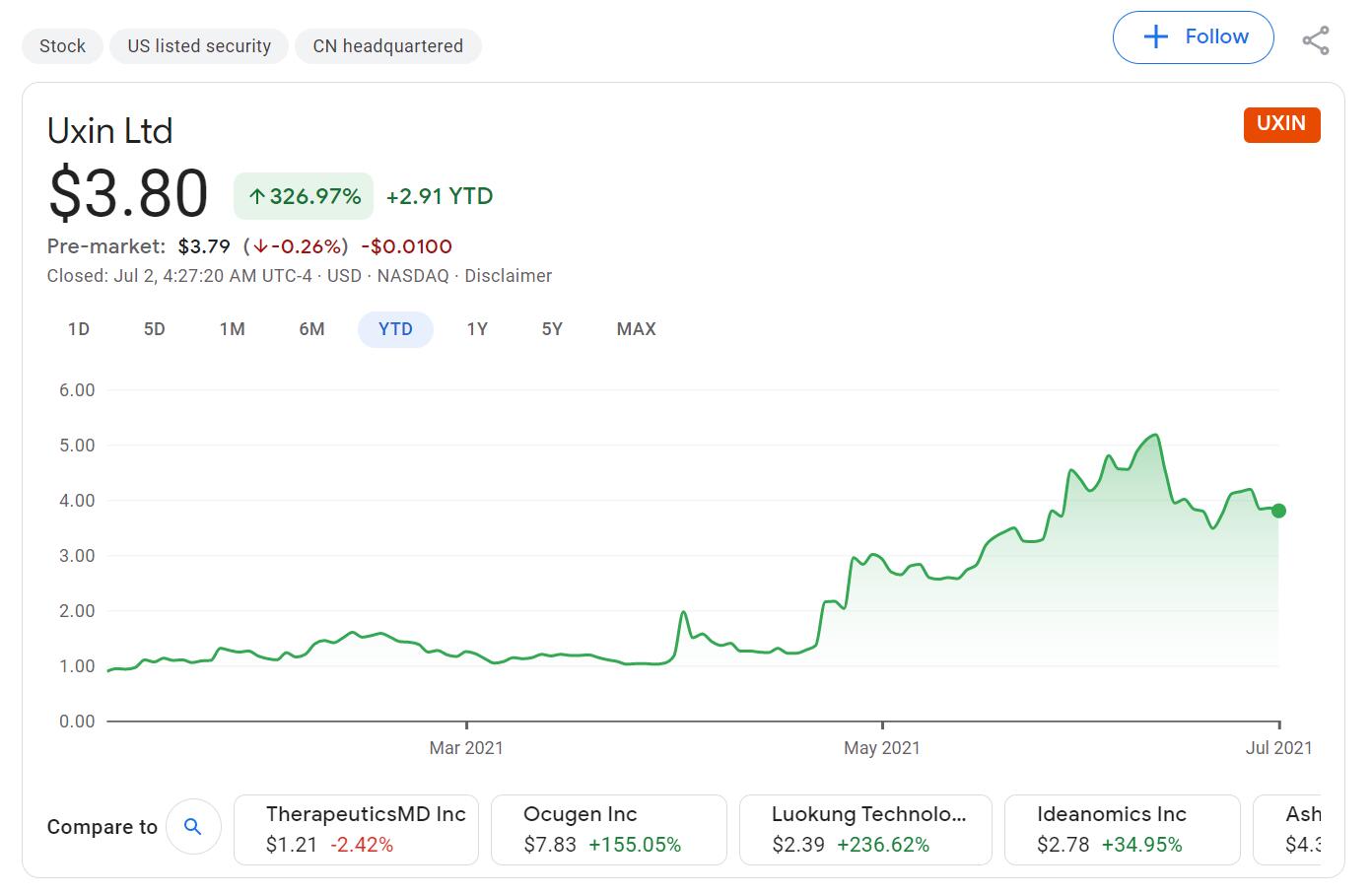