Reports Friday that Tesla was in talks with Eve Energy about including it in the supply chain of its Shanghai plant were denied by the latter on Sunday.

Shenzhen-listed Eve Energy said in an announcement that it had noticed the widely circulated reports and that it had checked the information.

As of the date of this announcement, the company has not done business communication with Tesla on the supply of lithium iron phosphate batteries, and the above-mentioned reports are unfounded, Eve Energy said, adding that there are no undisclosed matters that the company should disclose.

Reuters reported on Friday that Tesla is in talks with Eve Energy about including it in the supply chain of its Shanghai plant in order to increase its procurement of low-cost batteries.

The talks are advanced and the two are looking to finalize the partnership in the third quarter, the report said, adding that Eve Energy is in some final stages of testing for Tesla's products.

Eve Energy primarily produces lithium iron phosphate (LFP) batteries, which are cheaper to produce because they use iron instead of the more expensive nickel and cobalt. But LFP batteries typically offer shorter charge times than the more popular nickel-cobalt batteries.

Eve Energy is a much smaller player than CATL, a giant with half of China's power battery market share.

In April 2021, CATL's installed power battery volume was 3.82 GWh, with a market share of 45.5%. This is the first time CATL's market share has been below 50% this year, a new low since July last year. 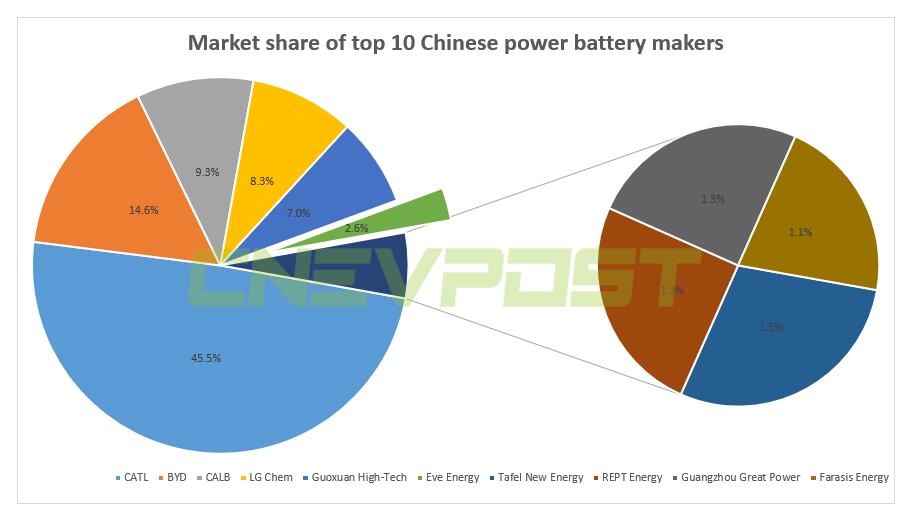