The period from Feb. 10 to March 8 was painful for NIO investors, with its stock falling 44% during that period.

But it wasn't NIO's fault. The root cause was a general sell-off in US tech stocks due to higher US Treasury yields, and the electric car company, which was up about 1,300 percent in 2020, was one of the victims.

Edison Yu, a Deutsche Bank analyst who closely follows China's electric car industry, said earlier this month after NIO reported fourth-quarter results that the company's revenue was largely in line with expectations and its guidance for the first quarter was impressive, so there was no reason for the sell-off in the stock to continue forever.

In a research note sent to investors on March 2, Yu's team raised their full-year sales estimate for NIO by 6,000 units to 96,000 units. They also reiterated their $70 price target on NIO at that time and saw the stock weakness as a buying opportunity.

US Treasury yields did not stop rising after the report was released, and that's not something anyone other than the Fed chairman can change. The sell-off in US tech stocks also continued for several more days, and NIO has been falling from March 2 to March 8, down nearly 30% in that period. 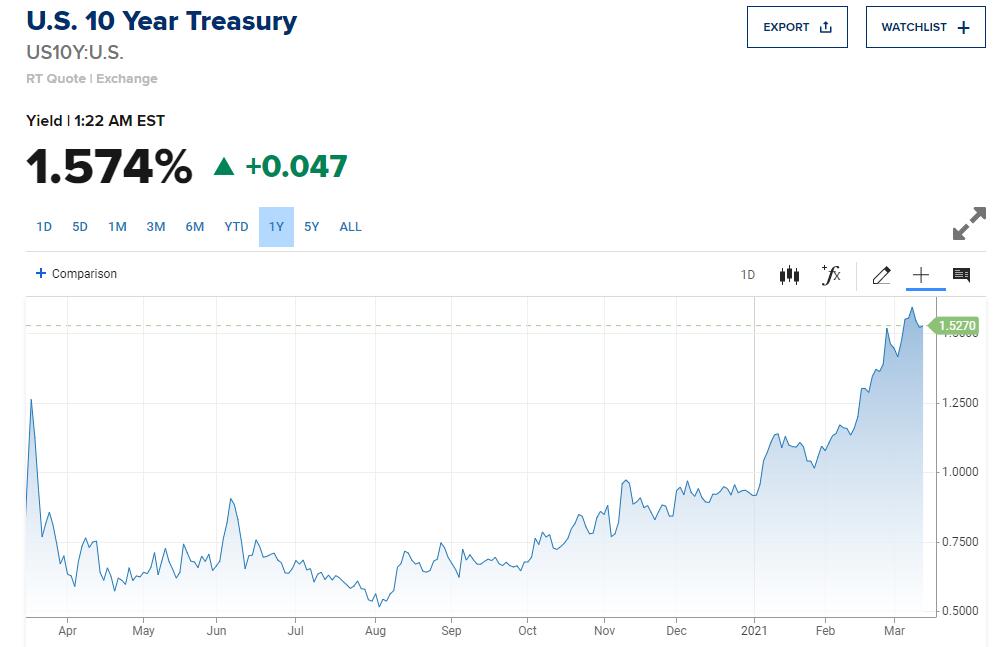 But as Yu predicted, NIO's decline during this period became a buying opportunity. NIO jumped 17.44% on March 9, its shares were essentially flat on March 10, and rose another 11.4% on March 11.

By Thursday's close, NIO's $46.03 stock price had essentially regained the $46.11 level it opened at on March 2, forming a perfect V-shape. 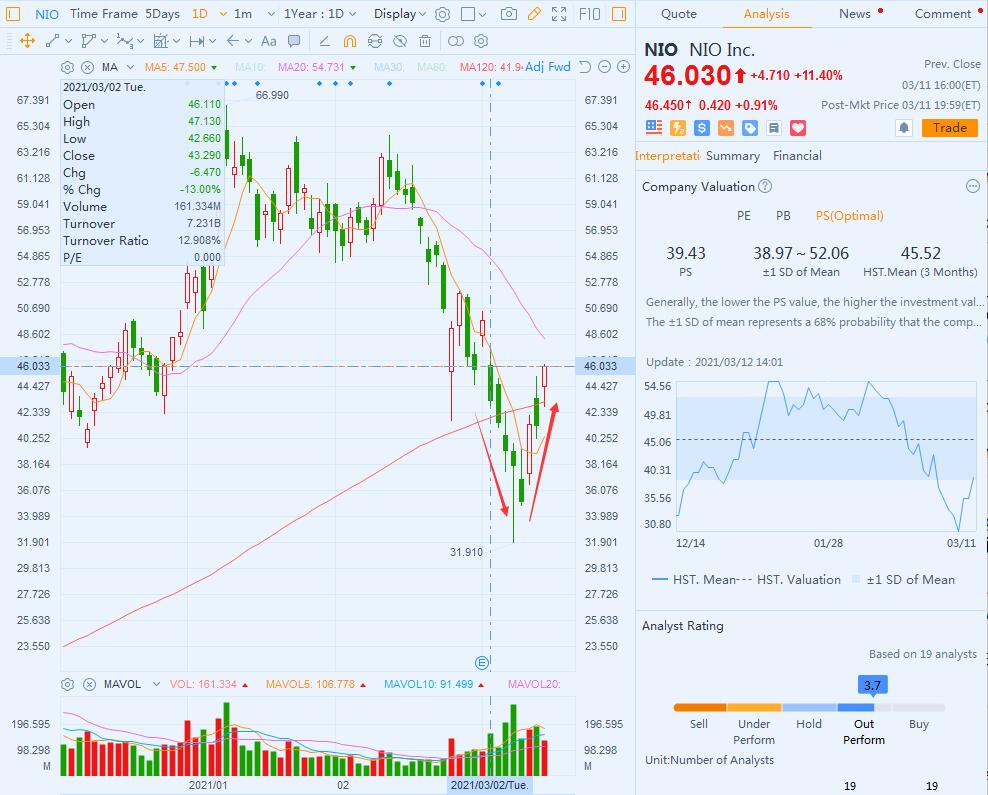 We won't brag about how accurate Yu's prediction is, and indeed no one can predict the stock market's movement. But as one of the analysts who follow NIO most closely on Wall Street, his logic of studying NIO is worth paying attention to.

In the near term, NIO management remains confident in its demand trajectory, reaffirming it does not see China-made Tesla Model Y materially hurting sales, the team said.

Looking ahead, NIO outlined a multifaceted growth roadmap with increasing volumes and higher software/services usage. In respect to volume, NIO is formulating plans to enter the mass market segment in the next few years with a new brand in China which will be positioned similar to Tesla's upcoming Model 2 (i.e., $25k vehicle).

Moreover, NIO is also getting ready to expand internationally in Europe later this year with a tailored approach driven by local insights.

In conjunction, NIO's management is garnering strong traction with its Battery-as-a-Service offering (55% take rate) and is on track to launch its ADAS/AD subscription in 1Q22 along with its ET7 flagship sedan.

Based on these, Yu's team reiterates their $70 price target and Buy rating.

Below is the detailed content from his research note.

NIO's core business will always be focused on the premium ownership experience but the CFO made it very clear the company is formulating plans to enter higher volume+lower price point segments in the next few years with a new brand.

This new brand will essentially be positioned similar to Tesla's future Model 2 ($25k vehicle) as "Smart EV" offerings trickle down to the mass market. By using a separate brand, the existing "NIO" brand can maintain its premium reputation while the company goes after higher growth and believes it can deliver differentiation through technology and user experience.

While the exact approach has not been finalized, NIO is open to partnerships but we think given their strong capital position, it could also consider building up a business organically, leveraging existing software/powertrain technology.

Management highlighted it does not want to follow existing approaches by many automakers where they make similarly styled vehicles for their mainstream/luxury brands.

Management reiterated it continues to see no material impact on its demand from the Tesla Model Y price cut earlier this year. On the contrary, it believes Tesla continues to have a positive halo effect for all BEVs, attracting incremental buyers from gasoline car owners.

NIO is on track to sell vehicles in Europe later this year (we think Norway will be first market); volumes will be low but longer term NIO aspires to capture 10-15% of the premium segment in Europe, lower than its China target of 25-30%.

The CFO emphasized that there will be challenges related to brand awareness (very low in Europe) and also related to culture which will require a strong local management team and a custom tailored go-to-market strategy.

Product-wise, NIO feels very confident it can deliver competitive offerings given the China EV market is already much more cut-throat (e.g., BMW i3 still sold close to 20k units in Europe last year yet most consumers in China would not even consider buying such an old product).

ET7 sedan should be well received

NIO will increase its annual capacity to 150k/year (running 1 shift) by year-end in anticipation of the ET7 sedan beginning production in 1Q22.

The pre-order number will not be disclosed but is much higher than any of the existing models.

NIO sees a TAM of around 700k with BMW 5-series and Mercedes Benz E-class representing the most direct competitors.

Management confirmed that its next-gen autonomous driving system is on track to launch with the ET7 in 1Q22; it takes this timeline very seriously for the sake of the customers and maintaining its reputation.

NAD will be offered only as a subscription service for 680 RMB per month (>$100), meaning the hardware suite will be standard equipment on all vehicles (includes LiDAR).

NIO would not go into detail yet about what features to expect at launch and emphasized it will be an evolving feature set.

More generally, future new vehicles will be developed much more closely with suppliers of the chips and sensors to synchronize the product cadence (similar to Apple and its supply chain).

NIO has taken a rather unique view on the battery, believing it should be "chargeable, swappable, and upgradeable."

Underpinning this, all of NIO's battery packs are swappable and its Battery-as-a Service (BaaS) take-rate is around 55% now; users of this can upgrade their batteries when new technology comes out (i.e., hybrid solid state in 4Q22).

The heaviest users of battery swapping are drivers who do not have a home charger (~1/3rd of owners) and they usually swap out once every 3-4 days.

NIO is launching its second generation battery swap station in April; these new stations can swap batteries faster (3m vs. 5m) and also hold up to 13 batteries (vs. current 5), which should enable shorter wait times during peak usage periods (higher throughput). There should be >500 total stations by year-end vs. 191 now.

When comparing with fast charging (NIO also offers this), battery swapping is typically better for energy grid balance as the batteries will constantly be getting charged whereas fast charging leads to intermittent spikes in electricity usage.

However, for parking garages (e.g., at a shopping mall), management believes fast charging is more ideal. Swap stations are generally placed near highways.