The recent volatility in overseas market conditions and investor sentiment has caused NIO shares to pull back, but its core competencies and operating performance are on an upward trajectory in the medium to long term, said CICC, China's top investment bank, adding that it maintains an unchanged outperform rating on the company.

In a report released Wednesday, CICC said it expects NIO to sell 93,000 units in 2021 and is bullish on the company's medium- to long-term volume growth.

CICC said it maintains an unchanged price target of $85 for NIO, corresponding to a 71% upside.

NIO fell 13% on Tuesday and has lost about 27% in the past three weeks. 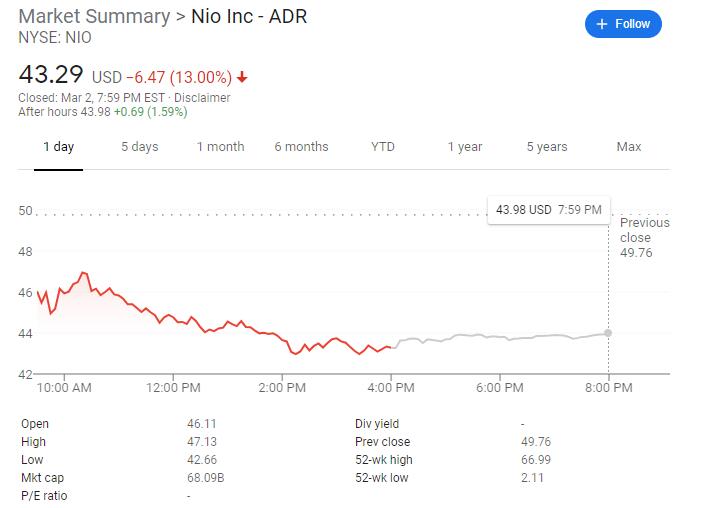 The adjusted loss per ADS for the fourth quarter was RMB 0.93, a 25.6 percent widening from the prior-year quarter and higher than analysts' expectations of a loss of RMB 0.45.

The team said that NIO continued to improve in all operating indicators in the fourth quarter:

Gross margin on vehicle sales improved by 2.7 percentage points to 17.2% from the previous quarter, already exceeding the average level of local car companies and closing in on the higher gross profit level of Chinese and foreign joint ventures.

New energy credits revenue was RMB 120 million, contributing 1.8 percentage points to the overall gross margin, which was offset by a negative contribution from energy replenishment-related services.

The company's expenses per vehicle were effectively controlled, with R&D expenses of RMB48,000 and sales and administration expenses of RMB70,000 per vehicle. This was at historically low levels and also helped achieve a 4.3 percentage point improvement in single-quarter operating profit margin sequentially.

However, the company raised $5 billion overseas in the second half of the year, which led to an impairment of US dollar-denominated assets amid exchange rate fluctuations, which disturbed net profit in the fourth quarter.

NIO has always claimed to be a user-centric company, which CICC said they believe is at the core of the company's high premium and high sales.

CICC said that with adequate capital, the company will also continue to build on its strengths in user experience, which include:

NIO expects to sell 20,000 to 205,000 units in the first quarter. Considering that NIO sold 7,215 and 5,578 units in the first two months of the year, CICC said its March sales target is at 7,207 to 7,707 units, which is expected to set a new quarterly and monthly delivery high, the best performance among China's new car makers.

CICC also said NIO is strengthening its attributes as a technology company and its core competencies continue to improve. The team stated.

The percentage of users choosing BaaS has rapidly increased to 55%, and its battery operation company has raised RMB 1.44 billion through two rounds of financing. Combined with partial bank credit, the company is expected to continue to expand its "vehicle-electricity separation advantage.

In terms of technology, the launch of ET7 is expected to enable the company to keep a leading spot in smart driving.