Home Li Auto Analysts explain why NIO, XPeng, Li Auto stocks fell early in the year and why they may have reached inflection point

Many people want to know exactly what happened and how NIO, XPeng, and Li Auto stocks might perform next. Now, analysts at CICC, China's top investment bank, give their take. 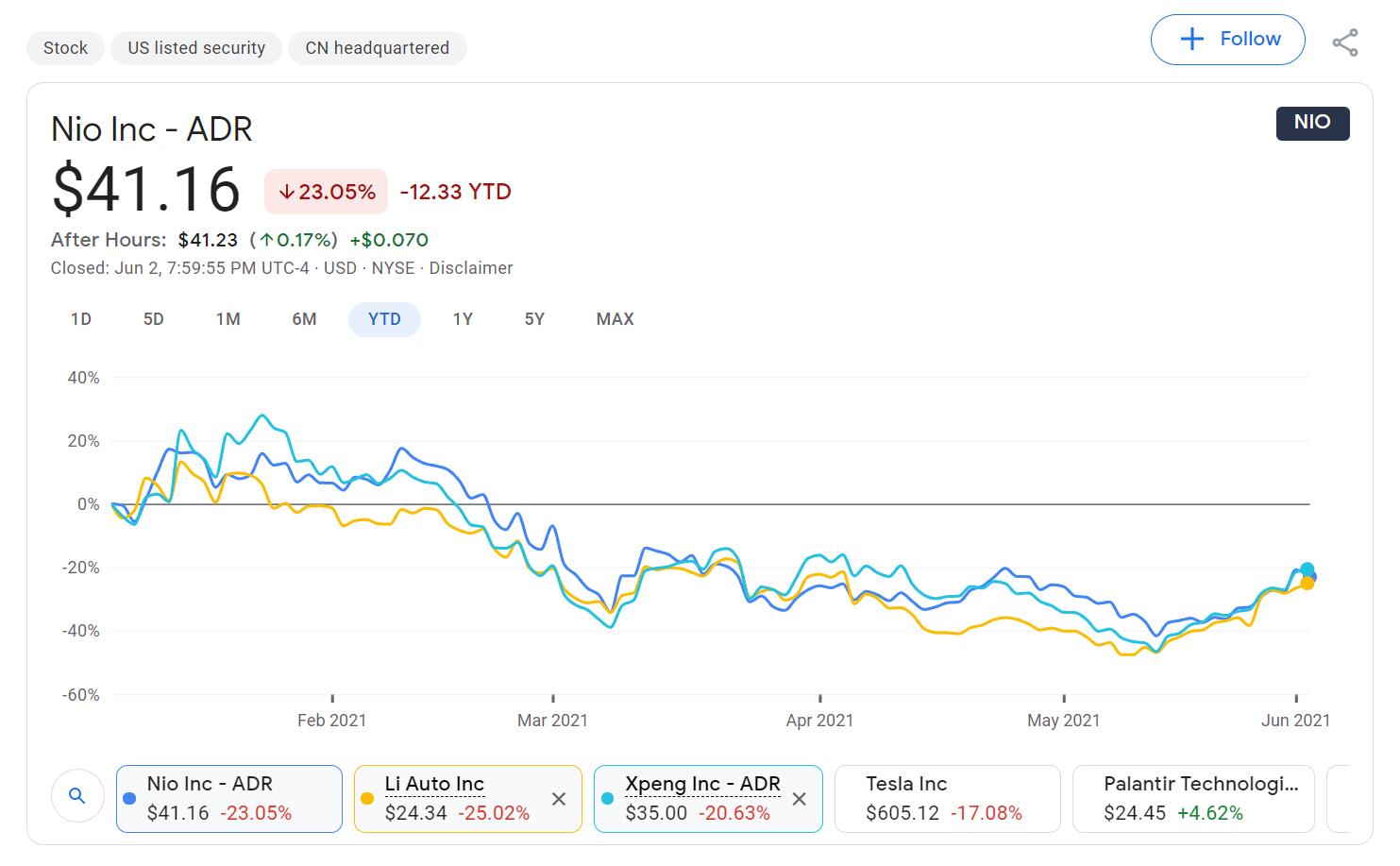 In a research note released on Thursday, CICC analysts Deng Xue and Liu Chang believe that there are three main factors that caused NIO, XPeng Motors, and Li Auto's stock prices to plunge early in the year.

The first is that seasonal factors led to the end of their month-to-month sales gains at the beginning of the year, but the market did not fully anticipate this at the time.

After the end of the Covid-19 pandemic in China in 2020, NIO, Li Auto, and XPeng's month-on-month sales continued to move higher. Their share prices climbed in tandem and peaked between November 2020 and January 2021.

The month-on-month sales growth ended on a seasonal basis with the end of the year-end peak season and the arrival of the Chinese Lunar New Year. But investors were still used to expecting their sales to rise month-on-month and did not fully anticipate a significant sales decline, which was one of the factors for the sharp correction in their share price, the team said.

NIO stock price has a large correlation with sales performance: 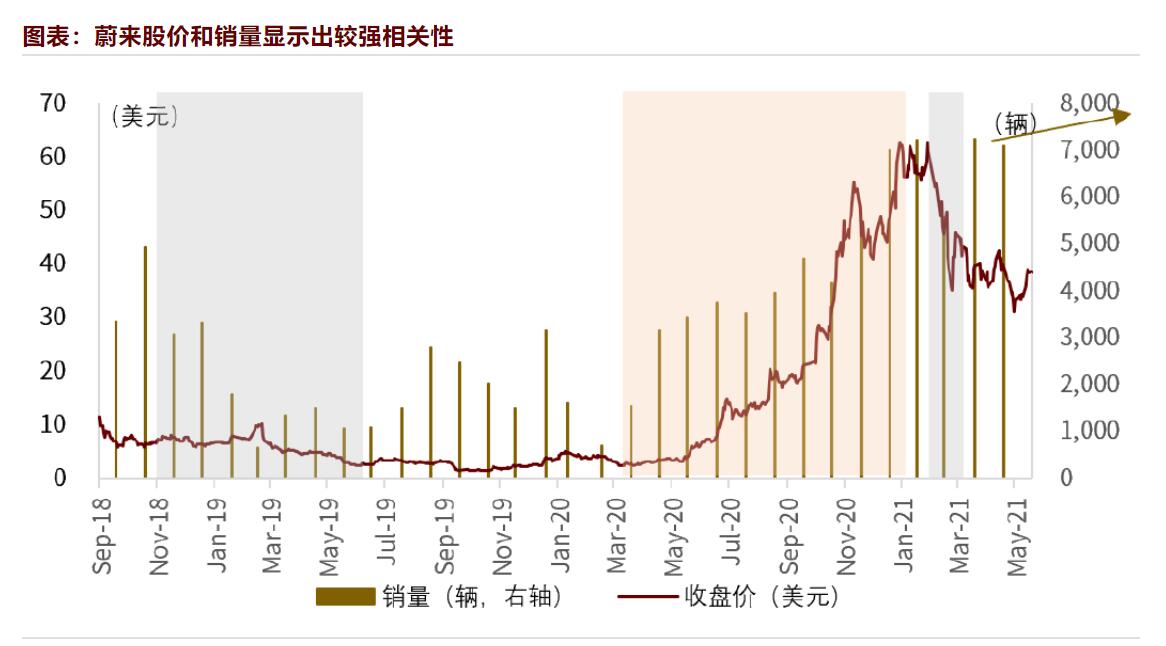 The second factor is the return of investor trading sentiment from overheated to rational.

Between November last year and January this year, NIO's share price rose rapidly and reached a high level, with "sky-high" turnover during the period, CICC noted.

On November 13, 2020, NIO's daily turnover reached $27.4 billion, ranking first among all US stocks and exceeding the combined turnover of Amazon and Apple. 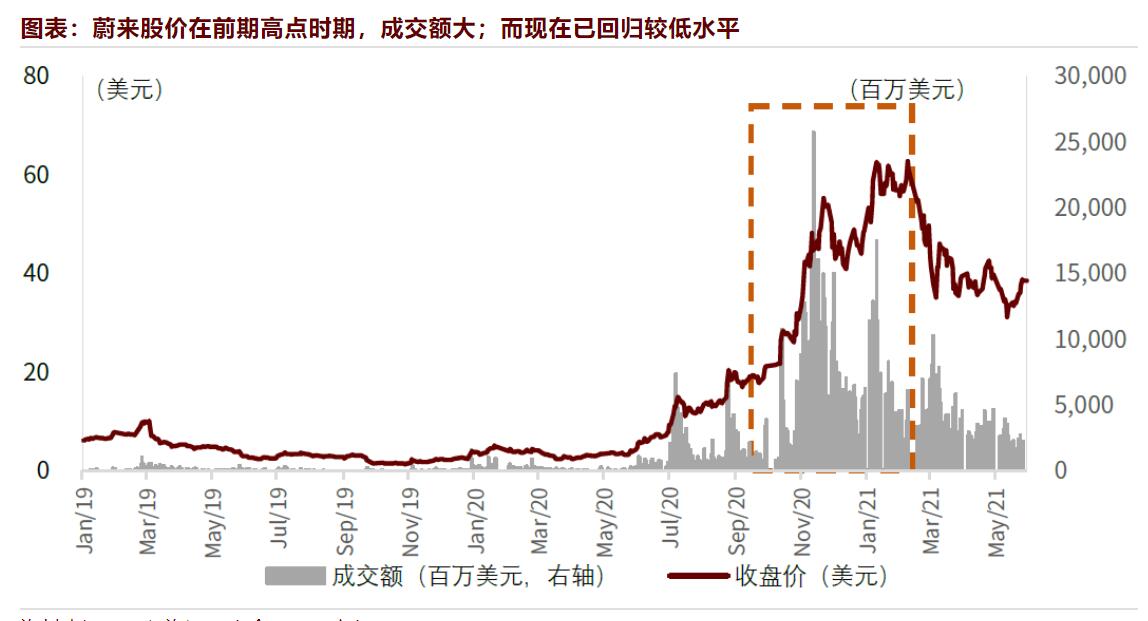 The third factor is the rapid rise in risk-free yields, which was dampening valuations of growth stocks.

During the February-March period this year, US 10-year Treasury yields moved up rapidly, and shares of NIO, Li Auto and XPeng fell in tandem.

"We believe this is due to the rapid rise in risk-free yields, which serve as the denominator in the DCF model, putting a damper on growth stock valuations," CICC said.

Marginal improvements in fundamentals are coming

CICC believes that from the current point of view, all the unfavorable factors at the beginning of the year have receded significantly, and the companies' fundamental indicators, represented by sales, will continue to improve.

The first lies in the easing of the global chip shortage, and the capacity of batteries is being released, with the supply of components moving toward abundance.

"In the last six months, electric vehicle production capacity has been dragged down by chip and battery shortages, resulting in a dampening of downstream vehicle production. We expect the chip shortage plaguing the auto industry to ease marginally from the third quarter onwards, along with the release of upstream capacity," CICC said.

The team expects battery supply, such as the 100kWh packs from NIO's partnership with CATL, to start moving higher from the third quarter, the team said.

The second point is that demand is starting to move into peak season, with new energy vehicle demand more resilient.

The third point lies in the expected step-up in sales as new vehicles hit the market.

"Another major fundamental boost for these three emerging smart electric vehicle companies comes from the launch of new vehicles. We judge that the launch of the 2021 Li ONE, XPeng P5 and NIO ET7 will provide a rapid boost to sales," CICC said.

Coming to the same starting line as traditional carmakers

Looking ahead, CICC believes that the emerging car companies are cash-rich and well-organized, and have arrived at the same starting line as traditional car companies.

After several rounds of large financing in 2020, NIO, Li Auto and XPeng have cash reserves of RMB 42.4 billion, RMB 28.6 billion and RMB 33.3 billion respectively at the end of 2020, which are already higher than most traditional car companies, CICC noted.

In terms of staff structure, NIO will have nearly 10,000 employees at the end of 2020, and Li Auto and XPeng will have about 4,000 employees. With a very small number of models, these companies have all established sound organizational structures, the team said.

And emerging car companies pay special attention to investment in R&D, the density of their single-vehicle model R&D investment is higher than that of traditional car companies, and more R&D resources are also invested in the direction of autonomous driving, the team said.

Emerging car companies, on the other hand, are light on their feet, with flexible institutional mechanisms and agile development cycles.

VW's MEB model, which has been in development for five years but still performs mediocrely and lags far behind Chinese automakers in terms of intelligence, is perhaps a bad example, CICC said, adding that VW plans to use another five years to make progress in intelligence.

In addition, compared with the traditional car companies' "engineer thinking", NIO, Li Auto, XPeng and other emerging intelligent electric car companies start with user needs at the early stage of product design and focus on the whole process experience.

On top of that, NIO establishes a "user-centered company", using the product as a carrier and social network as a portal to achieve a high-quality service experience and successful community operation, said CICC.

NIO is the first local car company to break into the high-end market, leaving ample room for the company's subsequent intelligent exploration and sales expansion, according to CICC.