At press time, NIO is up 11 percent in Hong Kong, XPeng is up about 7 percent and Li Auto is up about 6 percent. 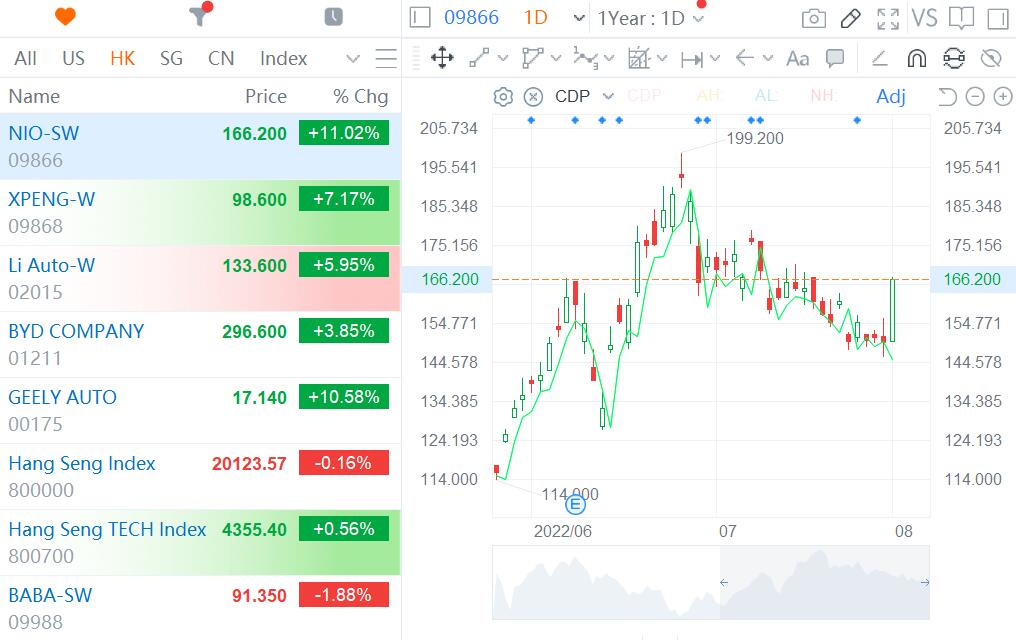 NIO was up 11 percent to HK$166.20 in Hong Kong at press time, after the stock fell about 7 percent last week.

A latest top government meeting last week confirmed that China's policy of exempting new energy vehicles from purchase taxes will be renewed next year to continue supporting the industry's growth.

To support the development of fuel-efficient vehicles, China first began exempting NEVs from purchase taxes in 2014, allowing most consumers who buy such vehicles to save about 10,000 yuan ($1,580) relative to those who buy traditional fuel vehicles.

The NIO brand won't launch a less expensive model than the ET5 or a production two-door sports car, but it will launch a model "with character" next year, the company's founder, chairman and CEO William Li said over the weekend.

NIO held NIO Partner Day 2022 on July 30, and Li said the NIO ET7, as well as some other models, hit a bottleneck in capacity for parts in casting in July.

Li Auto today updated Li L9 reservation owners on expected delivery dates for the new SUV, which will begin as soon as this month, according to a screenshot of the order shared by some Weibo users today.

Li Auto officially unveiled the Li L9 on June 21, the company's second model after the Li ONE SUV, which follows the extended-range technology of its predecessor.

On June 4, Li Auto founder, chairman and CEO Li Xiang said on Weibo that the model will be officially delivered to customers in August and deliveries could exceed 10,000 in September.

There has been no news about XPeng in recent days, though rumors about the company's price cuts in offline stores sparked wide discussions last week.

NIO, XPeng and Li Auto are all expected to announce their July delivery figures later today, having delivered 12,961, 15,295 and 13,024 units respectively in June.