Li Auto had the highest number of insurance registrations among China's new car makers in August, with 9,394 units, according to a table released Saturday by Sina Auto based on data from the China Automotive Technology and Research Center (CATARC).

XPeng Motors came in second, with 6,945 insurance registrations in August, followed by NIO with 6,476.

Earlier this month, Li Auto released figures showing it delivered a record 9,433 Li ONEs, the company's only model, in August, up 248 percent year-over-year and up 9.8 percent from July.

XPeng said it delivered 7,214 vehicles in August, up 172 percent year-over-year but down 10 percent from July.

NIO said it delivered 5,880 vehicles in August, up 48 percent year-over-year and down about 26 percent from July. 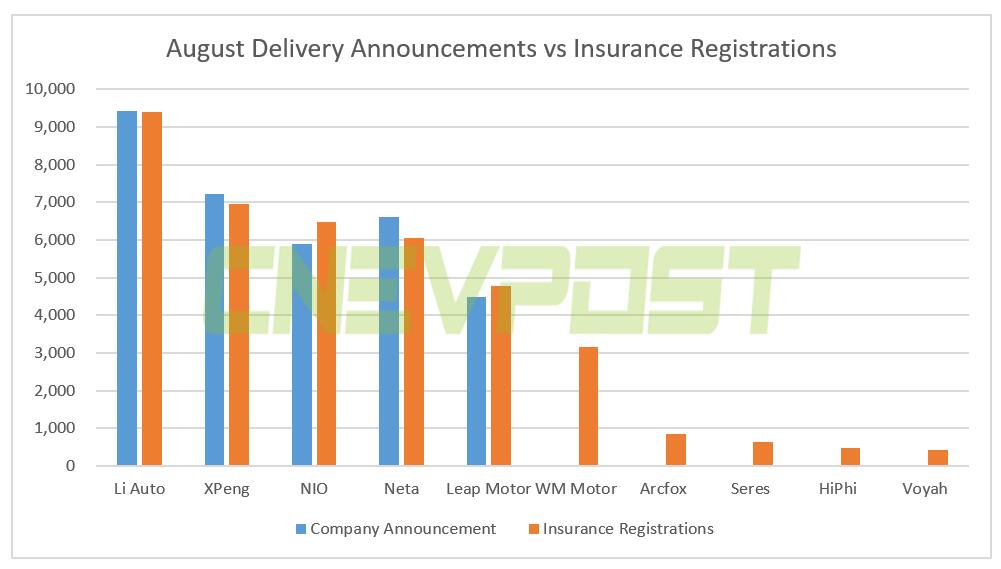 The CATARC figures are based on insurance registrations for vehicles and are closer to true retail sales each month, as vehicles must have insurance in place and in effect before they can be licensed.

WM Motor had 3,144 insurance registrations in August, the CATARC data show. It has not yet released sales figures for August.

Arcfox, the BAIC-owned EV brand, had 856 insurance registrations in August, compared with 642 for Seres, which sells cars in partnership with Huawei, 469 for HiPhi and 408 for Dongfeng Motor's premium EV brand Voyah.