NIO has a large number of very loyal owners, but these owners are divided over a recent accident that has embroiled the company in a maelstrom of controversy.

After 500 NIO owners issued a joint statement defending the company from a fatal ES8 crash, more owners voiced their opposition to the joint statement.

"We are well aware that NIO's NOP is currently an assisted driving system, not an autonomous driving system or driverless system," the joint statement, released Wednesday, said, adding, "NIO's presentation and promotion of the NOP have not been confusing or misleading to us. "

Following the release of that statement, many car owners said they were unaware of the specifics of the statement, did not participate, and did not want to be represented.

Other owners said that they did not receive a professional introduction targeting driver assistance systems during the car buying process and that the staff was not as knowledgeable about the vehicle's features as they were when delivering cars.

As of press time, information from the NIO App shows that 4,594 people have participated in the topic of objecting to the statement. 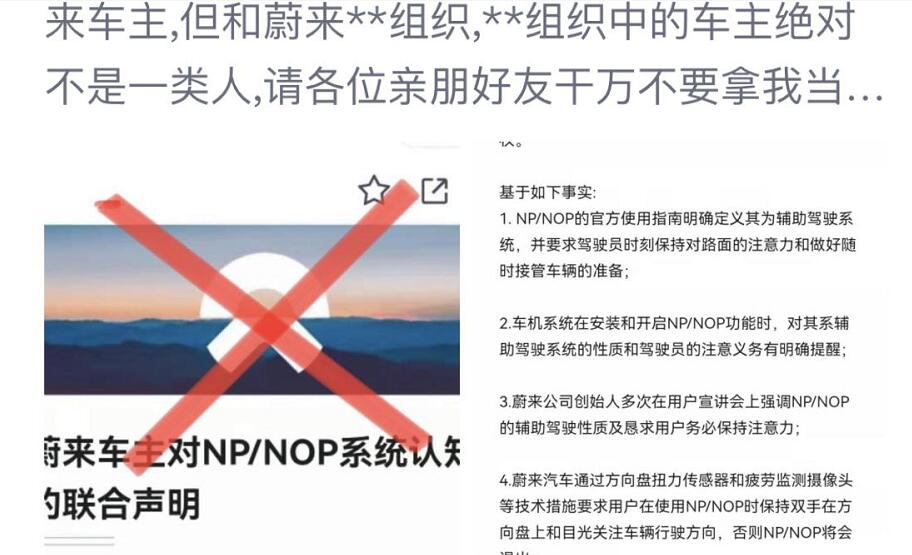 According to glxsl2017, a WeChat account that follows the electric vehicle industry in China, the initiator of the statement, Lin Wei, the owner of the NIO ES8 Founding Edition, said that the statement was created based on Tencent documents and reached the 500 person limit within two hours.

He also mentioned that NIO was not contacted when the statement was made, hoping that their "voice of reason" would be heard.

"This is a joint statement from the NIO owners themselves and is not associated with the company. We don't know the exact number of owners," caijing.com.cn quoted NIO sources as saying on Wednesday.