Legendary growth investor, Louis Navellier, made the argument in an article published Monday, saying NIO was on the verge of dominating the EV market in the Chinese mainland and Hong Kong, so he put NIO in its Platinum Growth Club Model Portfolio in February.

With the backing of the Chinese government, some Wall Street firms are eager to help NIO by issuing new debt or equity. "So, I wouldn't be surprised if NIO surpasses Tesla, which is currently number-two in China, for market share in the upcoming years," Navellier wrote.

"That means, if you missed Tesla's parabolic run like I did, NIO is essentially giving us a 'second chance' to make money in a potentially explosive electric vehicle company," Navellier continued. 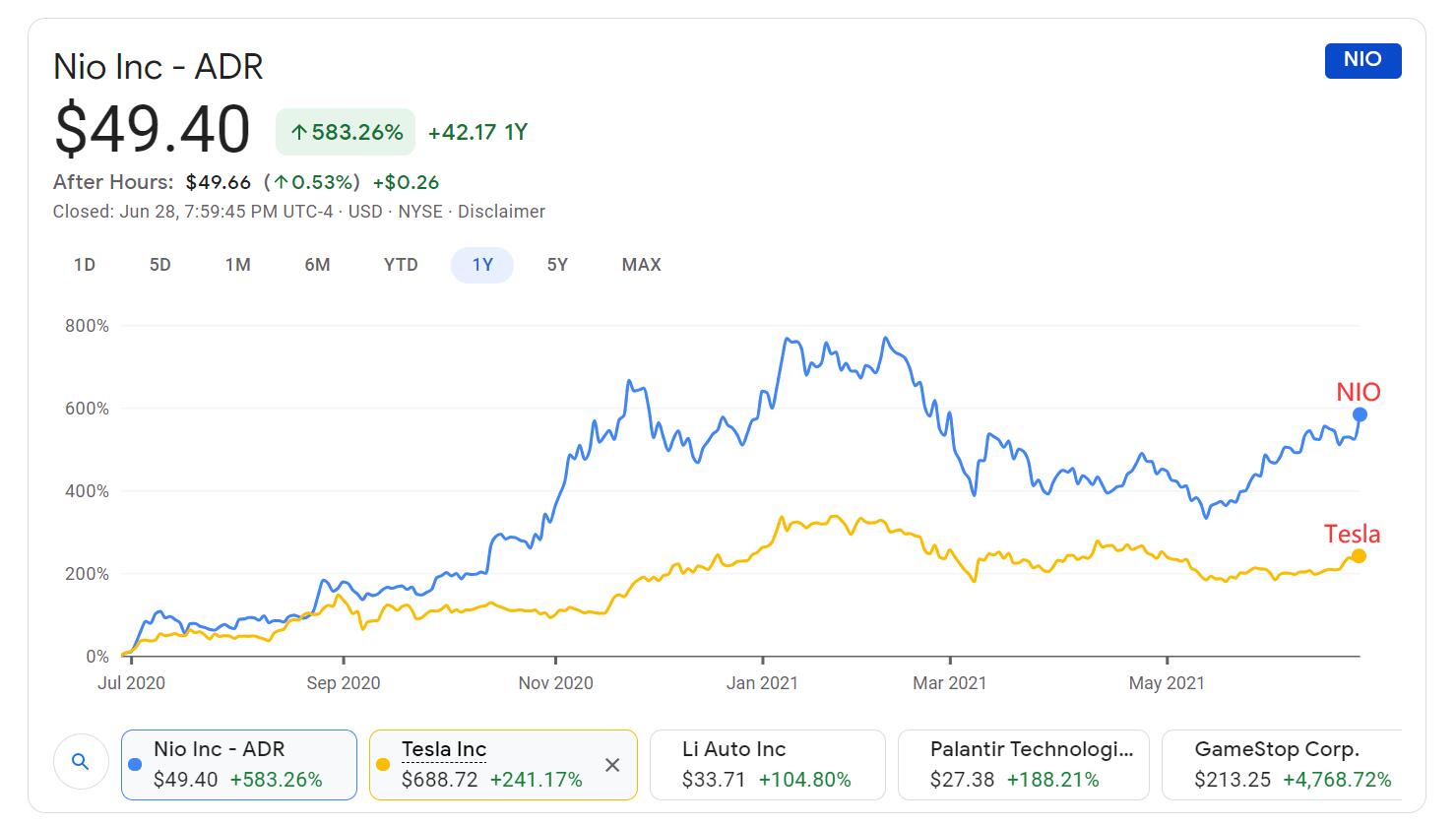 The following is the full text of Navellier's article, first published in InvestorPlace.

Why I Believe NIO Will Beat Out Tesla

Super fans of the latest and greatest high-end Tesla, Inc. (TSLA) model received some disappointing news a week ago when CEO Elon Musk abruptly canceled the release of its highly anticipated Model S Plaid Plus with a Tweet on June 6.

Musk wrote there was… "No need, as Plaid is just so good."

The Model S Plaid Plus was supposed to be the fastest, most powerful, and priciest version of the company's Model S. Priced at $149,990, it was to feature a range of 520 miles, thanks to its innovative 4680 battery cells, 1,100 horsepower and the ability to speed from 0-to-60 mph in less than two seconds.

Instead, the company has begun delivering a new Model S Plaid that has only a 390-mile range and 1,020 horsepower, though it still sprints to from 0 to 60 miles per hour in just two seconds.

This "bait and switch" has some Tesla fans worried, since they had deposits on the Model S Plaid Plus and wanted the innovative 4680 battery cells that Tesla had been touting as the key to longer range and more power. Essentially, the 4680 battery cells were the latest great Tesla development, since they were the first batteries to also be a structural component that supposedly allowed Tesla to lower the weight of its vehicles.

Both the company's Austin and Berlin manufacturing plants now under construction are supposed to also be making the 4680 batteries for new Tesla vehicles. If there is a problem with the engineering associated with utilizing the 4680 batteries or making them a structural component, then Tesla has grossly miscalculated, which is now worrying investors.

Clearly something happened to delay the 4680 batteries that were supposed to provide Tesla with a competitive and engineering edge. For Tesla's sake, I hope they figure out the problems associated with their much hyped 4680 battery cells, otherwise concerns about its two new manufacturing plants will emerge, as well as the stock losing more of its "mojo."

As someone who owns more than a few high-performance vehicles, I can tell you that the engineering geeks I know do not want to get a new Model S Plaid instead of a Model S Plaid Plus, and will likely ask for their deposits back.

What Tesla did is like Ferrari or Porsche telling its customers that one of their much-hyped new performance models is now not being sold because the base model was just as good! Car fanatics, like myself, like the latest and greatest engineering tidbits, so we would rather cancel our orders versus settle for a base model.

The good news for Tesla is that its China sales in May resurged to 21,936, up sharply from 11,671 in April. The company's sales tend to spike at the end of each quarter. For example, Tesla sold 35,478 vehicles in China in March, which was the strongest month ever in China.

This is raising expectations for very strong China sales in June, especially now that the Model Y is being manufactured in Shanghai. Interestingly, since most Chinese Teslas are now made with iron phosphate batteries, these vehicles have lower range than its lithium cobalt vehicles, but its iron phosphate vehicles are cheaper and now increasingly being exported to Europe.

However, I'm convinced another electric vehicle (EV) company will eventually displace Tesla as the biggest manufacturer of EVs in China.

I'm talking about Nio, Inc. (NIO). The reality is that this company is on the verge of dominating the EV market in China and Hong Kong. It's why I put NIO on my Platinum Growth Club Model Portfolio back in February.

The company boasts that it is the "next-generation car company," as it designs and manufactures electric vehicles that utilize the latest technologies in connectivity, autonomous driving and artificial intelligence (AI). NIO currently offers an electric seven-seater SUV (ES8) and a five-seater electric SUV (ES6), and recently introduced an attractive electric sedan (ET7). Its vehicles utilize NOMI, an in-vehicle artificial intelligence assistant.

The company is also partnering with cutting-edge chip companies like NVIDIA Corporation (NVDA), another one of my Platinum Growth Club Model Portfolio stocks. NIO plans to use the NVIDIA DRIVE Orin system-on-a-chip for its electric vehicles that will provide autonomous driving capabilities. The NVIDIA DRIVE Orin-powered supercomputer, which is being called Adam, will be launched in the ET7 sedan in China in 2022. Announcements like this are very positive, so NIO has been stealing some of Tesla's thunder lately.

With the backing of the Chinese government, some Wall Street firms are eager to help NIO by issuing new debt or equity. So, I wouldn't be surprised if NIO surpasses Tesla, which is currently number-two in China, for market share in the upcoming years.

That means, if you missed Tesla's parabolic run like I did, NIO is essentially giving us a "second chance" to make money in a potentially explosive electric vehicle company.

Shares of NIO climbed nearly 13% since the company's June 4 announcement of its May delivery report and positive analyst comments, while Tesla shares rose almost 3%. First, NIO revealed that the global chip shortage is starting to take a toll on its business. NIO only delivered 6,711 vehicles in May, or a 5.5% decline from April's deliveries. Company management noted that deliveries were "adversely impacted for several days due to the volatility of semiconductor supply and certain logistical adjustments."

Interestingly, despite the month-to-month dip, NIO's deliveries were still up 95.3% year-over-year. Strong demand in China even inspired a Citigroup analyst to upgrade NIO to a buy rating, as he expects demand to accelerate in the coming months.

Of course, if you're looking to shore up your portfolio with fundamentally superior stocks like NIO, look no further than Platinum Growth Club.

I have more than 100 stocks across all of my services, and each and every one boasts strong earnings and sales growth. My Platinum Growth Club Model Portfolio stocks have been posting wave-after-wave of positive earnings results in the most-recent quarter, which, in turn, has dropkicked and driven many of them higher.

Of course, you don't have to invest in all 100+ stocks. If you'd rather start small, I've got you covered there, too. My Platinum Growth Club service comes with my exclusive Model Portfolio. I handpick all of my Model Portfolio recommendations from my different stock services – Growth Investor, Breakthrough Stocks and Accelerated Profits – so you can rest assured that you're always invested in the crème de la crème.

The great news is you really couldn't be joining at a better time, as I released my exclusive Platinum Growth Club June Podcast on Wednesday. I discussed the annual Russell realignment that's forcing buying pressure under select small-cap stocks, as well as the recent economic data and what to expect as the market grows more narrow during the bumpy summer months.

If you're interested in joining and learning more about my latest stock recommendations, click here for full details.