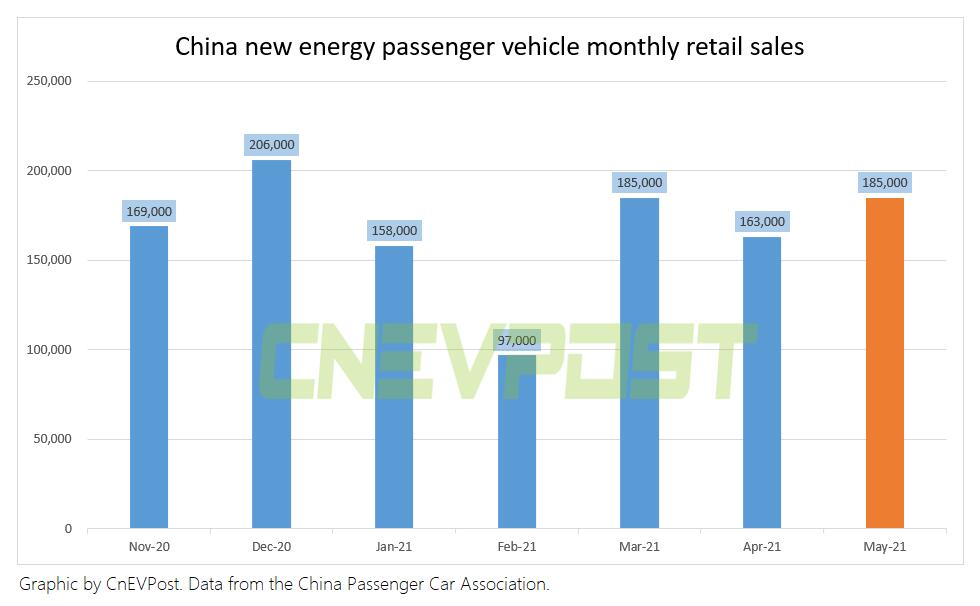 Retail sales of new energy passenger vehicles in China reached 185,000 units in May, up 177.2 percent year-on-year and up 17.4 percent from April, according to data released Tuesday by the China Passenger Car Association (CPCA).

China's wholesale sales of new energy passenger vehicles reached 196,000 units in May, up 174.2 percent from a year earlier and up 6.7 percent from April, the data showed.

Sales of high-end electric models grew strongly in May, while mid-range and low-end sales were mediocre, the CPCA said.

The number of new energy vehicles exported from China in May showed explosive growth, including 11,527 units from Tesla China, 2,430 units from SAIC, 549 units from JAC, 223 units from BYD and 143 units from Aiways.

New energy vehicles for the mass market among mainstream joint venture brands accounted for a 48 percent share. Luxury car companies' pure electric vehicles are in full production, and product acceptance is still to be improved, the CPCA said.

General hybrid passenger vehicles wholesaled 47,000 units in May, up 81 percent from May last year and unchanged from April, the CPCA said, adding that Japanese joint ventures were more affected by the chip shortage.

Retail penetration of new energy vehicles in China reached 11.4 percent in May, compared with 9.4 percent in January-May, a significant increase from the 2020 penetration rate of 5.8 percent, the CPCA said.

In May, the penetration rate of new energy vehicles among local brands was 24.7 percent, 10.8 percent among luxury vehicles, and only 1.7 percent among mainstream joint venture brands.